Reinvent Auckland, Simon? If Only We Could! 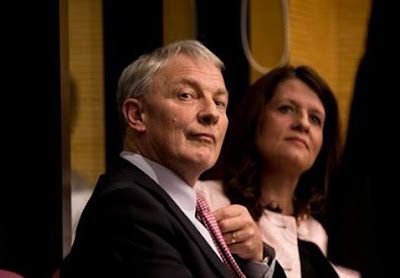 Auckland has been taken over by immigrants, Kiwis have been locked out by the money they have and the money supply available to them, raging property prices do not look like abating. Council have been complicit ( by holding back land) with Parliament to cause this and only one politician has had the grit to speak out.
Yes old Winnie and his party is the only party to say they will curb or stop immigration particularly from countries that do not share our values.
John Key wanted to hold the line on past intakes but the pressure from Labour, Green and all those sob heart groups forced his hand, he was not strong enough.
I am sure Goff will be another Len Brown with a blue suit on.
I am sure, despite assurances from the Mayoral candidates, that rates will rise above inflation.
I am sure that pay rises will continue to soar and that Managerial positions with salaries above $100.000 and $200.000 will continue to increase.
I am sure that people will continue to hate the super-city as many of them hate it now.
Rodney Hide should hang his head in disgrace for this out of control monstrosity he sign off on.
I shall vote for Penny Bright, she wants transparency, particularly in the letting of contracts, I want transparency and prudent and cost cutting management of the whole rotten caboodle. She offers the closes to my needs.

Apart from being a little too hard on Simon Wilson--whose detailed analysis of the machinations and personalities of Auckland Council is usually spot on--your high level overview is persuasive. Where to with the neoliberal white elephant? We can make some useful adjustments this coming term (I feel your head starting to shake, should you get as far as reading this), especially to the resourcing and delegated power of local boards. I think that local boards have been a success story despite all the roadblocks and neglect heaped upon them by the Governing Body and some staff. However, without significant culture change, especially seeing off the ex-mayors and deputy mayors on Governing Body who can't accept stronger local boards, we won't get any further than incremental adjustment. Please don't squander your vote for the Governing Body!

It's funny, everyone from Roger Douglas to Rodney Hide has promised transparency. But it never seems to arrive. It's like the flying car – always five years away. And I think it was a little mean to mention Brown's affair :). Still, he should have known it was going to come back and bite him in the arse at some stage. Figuratively speaking of course. Over and over again it seems. Good fodder for the seven days crew I imagine. Don't live in Auckland, haven't for some years, but from what I know of some of the candidates it's not looking good. I doubt if there is any of them that would have the guts to stand up to the CCOs even if they wanted to. They pretty much be hand in glove I think.

Nice one Chris for reducing the number of votes for Phil Goff. I'm glad your strategy won't work, or you could kiss goodbye to decent public transport and the basis for a social democratic city.

I think there is a clear need for local Council powers to be clearly defined in a constitutional document which cannot be changed at the whim of central government without a super-majority of some kind. Constitutional issues generally need to be discussed. Why has New Zealand still not got a written constitution?

Accurate and very depressing observations. One really insidious consequence of making unaccountable and arrogant CCCOs and their devious bureaucratic henchmen so all powerful its the dreadful effects this Council is having on the environment. And not just in the metropolitan areas. That these devious and arrogant employees can wreak havoc in pristine coastal area like Te Arai, the most north eastern corner of what used to be Rodney is a scandal. And nothing will change under Phil Goff, as you say. His PR minder also represents the developers causing utter devastation on a pristine coastline,home to NZ,s most endangered sea birds - all for the benefit of a few rich Americans who can afford a 4 million dollar house lot and golf club membership fees of several hundred thousand dollars. The same developers are trying to make it hard for locals and survives to retain access to this beautiful beach and its fabled surf breaks. All this is has the enthusiastic support of Auckland council which is bending over backwards to facilitate. No development contributions seem to be forthcoming to improve the dreadful roads in this area. The golfers don't need them you see, an airstrip and heliport are available. You can probably imagine how thrilled locals who value their now lost tranquility, are. The same people whose ground water levels are dropping because of bores sunk to service the golf course and whose land has secretly been responded at the developer's request so that these land owners can no longer subdivide their land. No political accountability, squillions of dollars flying around. A super corrupt, super cynical city indeed. That's why people don't vote.