Cause For Celebration: An Entirely Fictional Exchange. 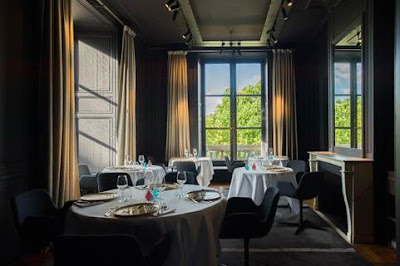 "Shhh, Sir! Walls have ears. Even Here." "No, Rachel, not here. The GCSB sweeps this place every week. We can speak freely here."
A PRIVATE DINING-ROOM in an exclusive Wellington restaurant. Seated at a window table and reading a newspaper is JULIAN, a well-dressed senior officer in the NZ Security Intelligence Service. The door opens and a waiter ushers in RACHEL, a much younger officer.
RACHEL: That’s not The Guardian I see you reading, is it Sir? Tsk, tsk! What would the Minister say?
JULIAN: Well, yes, I’m afraid it is, Rachel. I’m keen to discover exactly how much they actually know about our SAS deployment in Iraq.
RACHEL: Shhhh, Sir! Walls have ears! Even here.
JULIAN: No, Rachel, not here. The GCSB sweeps this place every week. We can speak freely here.
RACHEL: Well, that’s good to know because I’ve just received some very interesting intelligence from one of our more reliable sources in the Labour caucus.
JULIAN: Hah! I’m relieved to hear that at least one of them is reliable! What have you been told?
RACHEL: It’s your old friend, Mr Cunliffe. He’s leaving Parliament.
JULIAN: About bloody time!
RACHEL: I thought you’d be pleased.
JULIAN: More relieved than pleased, Rachel. Cunliffe was a real problem.
RACHEL: For a while.
JULIAN: Oh, for more than a while, I think. From the moment he began to grasp the implications and ramifications of the Global Financial Crisis the man’s been a bloody great thorn in our side. Vaunting ambition armed with a convincing explanation. Nothing is more dangerous to the status quo than a man in a hurry with a story that makes sense.
RACHEL: Not that very many people ever got to hear it.
JULIAN: No, that’s true. But we were forced to rely on the media to an extent that made me distinctly uncomfortable.
RACHEL: But it worked, didn’t it? Our journalistic assets made sure that Cunliffe’s message never got taken seriously.
JULIAN: Oh yes, it worked. But the media is an unreliable ally. All it takes is for someone like Cunliffe to say something on live television or radio that resonates with the electorate. Something that can’t be edited out. Something that sets people on fire. When that happens the bloody journos just can’t help themselves. A story – is a story – is a story.
RACHEL: But Cunliffe did just the opposite, didn’t he? I mean, if we had worked night-and-day for a month we couldn’t have come up with anything half as good as “I’m sorry I’m a man.”
JULIAN: Heh-heh! No. That was way beyond even our most sanguine expectations!
RACHEL: And even if Cunliffe had said something … inconvenient … we were still covered. Didn’t you tell me that there was plenty up the Service’s sleeve if the campaign looked about to tip Cunliffe’s way? Something about a woman? Or was it two women?
JULIAN: Oh yes, there was plenty in reserve if something was needed to “shift the narrative” – as our academic friends might say.
RACHEL: Like a $100,000 bottle of wine?
JULIAN: Like a $100,000 bottle of wine.
RACHEL: And then there were the ABCs – although they never needed much in the way of encouragement from us!
JULIAN: No, they didn’t. But it was good to know they were there. Nothing turns the voters off faster than the spectacle of public disunity – let alone open revolt.
RACHEL: They would really have gone that far?
JULIAN: Rachel, my dear, they would have gone as far as tearing the Labour Party into bloody little chunks on the six o’clock news if that was what it took to prevent Cunliffe becoming Prime Minister. These are seriously unpleasant people – even by our rather loose standards.
RACHEL: Well, I suppose we only have to look at what’s happening in the UK to get some idea of what Labour MPs are prepared to do to ensure that a socialist never becomes prime minister. I had no idea MI5 had so many of them in its pocket.
JULIAN: No, neither did I. It has really been quite an impressive demonstration.
RACHEL: Corbyn’s still there, though.
JULIAN: For now. We, on the other hand, have something a little closer to home to celebrate. Some Champagne, I think.
RACHEL: Excellent idea, Sir! But, before we celebrate, I’d like to know why you think it took Cunliffe so long to take the hint – or should that be hints?
JULIAN: Do you know, I think it can be put down to his misplaced faith in Andrew Little. He really did believe that the man he helped to install as leader was a politician after his own, rather soft, Anglican heart. That although Little had to pretend to the ABCs that he shared their loathing of him, Cunliffe was convinced that, deep down, what Little really shared was his ideas. That, when victory came, there would be a prime, if not a prime-ministerial, job for him in the new Labour-Green cabinet. It’s taken him two years to realise that, in the highly unlikely event that Labour does win the 2017 election, there will be nothing for David Cunliffe. Nothing at all.
RACHEL: Good to know that Little can be relied upon to do the right thing.
JULIAN: Yes, it is, isn’t it? Cause for celebration. See if you can find that waiter, will you.
This sketch was originally posted on The Daily Blog of Wednesday, 2 November 2016.
Posted by Chris Trotter at 11:20

The Labour caucus is a Neo-Lib old cronies club these days.

If you can't get (or don't want) a membership nomination, time to look for another club.

Goodbye David Cunliffe. You were never going to be prime minister. Just a man!

Im not sure that you are right about the "Deep State" operatives Chris. You seem to assume that they have definite partiality toward the current political orthodoxy and ruling elite. I see them as very different: they are like Komarovsky in Zhivago, basically very mercenary with their feet in all camps, appearing to be loyal regime supporters whilst being positioned for all possibilities. It is telling that all of the high end policing / "security" functions of revolutionary states reflect their predecessors in personnel and methodology. The NKVD / KGB morphed quietly out of a "Tsarist" force into a "communist" force, then into a the current "statist" force of Tsar Vlad. Same people, same techniques. The CIA would I suspect do the same merely to continue to exist.

I reckon our current SIS etc will be loyal whilst it suites their personal position. Given a crisis or significant change in the prevailing winds I suspect they will sail off happily in that direction. We are talking leopards and spots. And I am not even sure how effective these people are: when states fail they by association have failed too. And lots of states fail.

Chris, John Le Carre would be impressed, spot on.

I wonder whether they will carpetbag his seat from a local?.

PS to my post a minute ago: Best of everything David Cunliffe.

"Best of everything David Cunliffe."

For once, I must agree with you.

It seems that these have been dramatic years politically and personally for DC. So I hope he enjoys being out of the political scene and becoming his own man.

In India they have in the past had a symbiotic relationship with vultures which have picked people's corpses clean. (I think I've read that they are getting poisoned from all the chemicals in people's bodies these days.) But the NZ habit of picking at live people makes our vultures truly horrid.

In India they had a place in the culture and there was a spiritual aspect to the way they were regarded. Here our sort of spirit would be poured on then lit.

Further to my comment about Indian vultures, here is a good item on what is done and why. They are more responsive to the needs of the environment than we are I think. With such a huge population and extremes of weather they have fashioned a ritual that flies the body and soul away rather than in the old line 'leaving them for the worms'.
http://www.nytimes.com/2012/11/30/world/asia/cultivating-vultures-to-restore-a-mumbai-ritual.html

It is good for David to get out of that 'tower of death' in Wellington .
He looks to bright and alive for them, still a real man, not a beltway hack.