Is This The Right Time To Protest Against An American Warship? 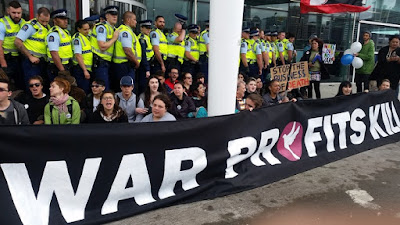 NO it is not the right time for protest.
The Americans are assisting in the relief of our brethren in the earthquake disaster.
We must thank them not protest them.

AntiCapitalists against Trump- Michael Treen Nadia Filistin Line Lux and Joe Carolan discuss the Trump Presidential victory and what it means for politics in America and elsewhere, on this month's Workers Voice radio show. http://www.planetaudio.org.nz/workersvoice/player Listen and enjoy- Please Share

An American tourist was angry it was taking so long to get them out of Kaikoura. He must have compared our military with the US. Our military effort is showing we will do nothing in the face of adversity (make peace), therefore we don't have much to get them out?

Polly
It might be wise to not be simple about this. What is in it for the
Americans? Why are all these warships in our area all together? What are the government and defence/attack personnel up to? What are they planning against China, our main trade partner, if anything?

But no worries the cavalry will come to our aid if the Indians fire arrows.
But then we need to go to the aid of the Indians, see Standing Rock etc.

We must not forget that it takes time to organise and when it is all
arranged and everyone is geared up for it it is almost impossible to reach everyone to call it off. They have all had to put aside usual routines, and got psyched up to do the protest. Give them credit for doing something other than pleasing themselves, the great NZ pasttime.