Something In America's Air. 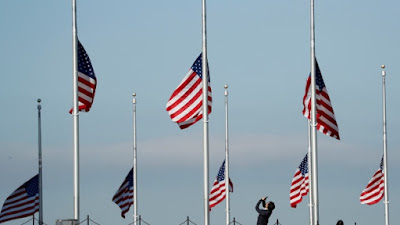 False Flags: Violence in America is not something which comes from outside. Violence dwells at the heart of American society and culture: it is the constantly beating organ which pumps its deadly and destructive energy into America’s arms and legs; into its brain and hands; into its trigger-finger.

HAVE YOU EVER THOUGHT ABOUT the way a bowl of fruit goes bad? All those apples, pears, oranges and mandarins may have been picked together, transported together, displayed together and sold together; but they do not go bad together. There is always one that goes bad before the others. Looking at each item of fruit, as you fill the bowl, it is practically impossible to identify which one that might be. But, give it sufficient time, and the right conditions, and that piece of fruit will make itself known to you.

Stephen Paddock’s brothers certainly hadn’t picked their murderous sibling as a bad apple. They simply had no idea he was capable of unleashing horror from the thirty-second floor of Las Vegas’s Mandalay Hotel – or why? One of them told reporters that hearing of his brother’s deadly attack on concert-goers was like being struck by an asteroid.

And that’s the way the rest of America will attempt to make sense of this latest mass shooting. Paddock’s crime will be characterised as something entirely exogenous to the daily rhythms of American life: something which, like a wayward piece of space rock, arrives unheralded, and unstoppable, from somewhere beyond this world.

Except that violence in America is not something which comes from outside. Violence dwells at the heart of American society and culture: it is the constantly beating organ which pumps its deadly and destructive energy into America’s arms and legs; into its brain and hands; into its trigger-finger.

Violence has been fundamental to American history. Whether it be the genocide basic to colonial America’s birth; or the indentured servitude and slavery which underpinned its economic expansion; violence has always been absolutely central to the American project.

Perhaps the easiest way to drive this point home to New Zealanders is to ask them to think about Australia. Why did Great Britain send forth its convict ships to Tasmania and Botany Bay in the late 1780s? What could possibly have spurred the British to such a colossal investment of men and resources downunder?

In the most simple and brutal terms, Australia was Great Britain’s response to the loss of its American colonies. Until the outbreak of the American War of Independence in 1776, Great Britain’s North American colonies fulfilled a role very similar to that which would, a decade or so later, be assigned to its Australian possessions: a vast wilderness into which His Majesty’s excess and most troublesome subjects – men and women – could be decanted. Throughout the eighteenth century, white indentured servants (persons legally bonded to their wealthy masters for a punitive period of time) vastly outnumbered African slaves.

It was an economic and social hierarchy constructed out of, and maintained by, a brutal combination of legal, cultural and physical violence. That it drove American history forward cannot be doubted. Certainly, America’s greatest president, Abraham Lincoln, apprehended its moral legacy. Speculating in his Second Inaugural Address whether America would remain riven by the “scourge of war” until “all the wealth piled by the bondsman’s two hundred and fifty years of unrequited toil shall be sunk, and until every drop of blood drawn with the lash shall be paid by another drawn with the sword”.

Science tells us that what rots the fruit in the bowl is the effect of microscopic organisms that float in the air all around us. All it takes is a particularly forceful bruise, or tiny cut, to begin the process. The spores of violence, likewise, float in the cultural air Americans breathe. Inevitably, her most damaged citizens; the United States’ rotten fruit, will make themselves known.

This essay was originally published in The Waikato Times, The Taranaki Daily News, The Timaru Herald, The Otago Daily Times and The Greymouth Star of Friday, 6 October 2017.
Posted by Chris Trotter at 13:19

Well said;
John Howard, Australian Prime minister introduced gun control upon the Australian nation when in office.
What America needs is a President of John Howards mettle.
They lack such a man.
Killings and mass killings will continue until gun controls are enacted in American society.

Unfortunately it seems that pigs will fly before that occurs.

"They lack such a man."
I doubt that even with such a man a great deal as possible. Certainly nothing on the scale of the Australian experience. There are more guns in America than there are people. The gun manufacturers distribute largess in huge sums particularly to Republican politicians, but also to Democrats in states where guns are regarded as an inalienable right. The NRA can mobilise hundreds of thousands of letter-writers and demonstrators at any one time. So I suspect that all they can do is nibble round the edges, because if they try anything too drastic they will be something akin to revolt.

As far as the shooter is concerned, he was white and that means a lot. It means for one that the NRA in Fox News finds it very difficult to categorise him. As one idiot said on Fox a while ago, "We don't know enough about him to hate him." Apart from the fact of course that he's killed fifty-eight or so people. If he were Muslim, it would be easy because they could call for expulsion/controls/war. If he were black, he would be a thug/criminal/gang member. But he's white, so he has to be a long wolf, an aberration, mentally disturbed. The USA has had one mass shooting – as defined by the FBI I believe – a DAY since the beginning of this year. And it isn't going to stop any time soon. Particularly as Congress and the courts seem determined to loosen gun laws rather than tighten them up.

I am finding "White Trash: The 400 Year Untold History of Class in America" by Nancy Isenberg to be a very useful discussion of the development of colonial America's class system, and the legacy it has left. Available on Amazon Kindle.

Well, we will soon see if this is true, now that Prince Harry is "dating" a young woman who isn't quite white. Probably just as well his grandad will soon pop his clogs eh?

We share prison population and teenage pregnancy figures but, thankfully, mostly not manic religion. The common amoeba in that is Scottishness with its vices of drink, violence and illegitimacy. For the benefit of Canada and us a little growth entered the picture of the Scots in the 1800s. The only part of the UK to espouse the conservative moral values of America's Right is Northern Ireland and the Democratic Unionists, now in UK government. This trace I can take you back further to the covenanting Lowlands. American religion is Scots via Appalachia rather than the enlightenment.

Our relationship is clear. And I'm scared about the growth of fundamentalist Christianity here too, knowing the craziness of 'born-again' relatives. The growth in NewstalkZB's popularity, with its nursing of ignorant prejudices, also scares me. We have to manage the junior America in us with adamant seriousness.

Changing the law would not solve the problem, it is in the heads of a significant percentage of USA citizens that the problem lies.

Changing the law, except around the margins is impossible in the US. Even if they did ban certain types of guns, they are usually grandfathered in. So it would be painstakingly slow process. Because the country is simply awash with guns. And the NRA is probably the best lobby group in the world bar none when it comes to getting its members to write shitty letters to their local politicians. Not to forget that the gun manufacturing lobby contributes migh,tily to almost all Republican and many Democratic politicians campaigns. So I'm not hopeful. Just glad I don't live there.