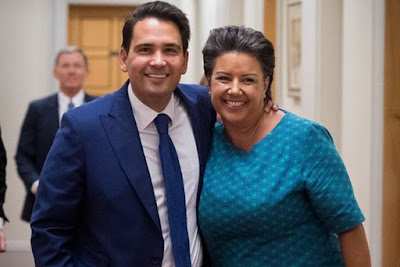 The Top Two: National's new leader, Simon Bridges, and his deputy, Paula Bennett, smile for the cameras after emerging triumphant from the National Party caucus-room.


National's caucus has elected Simon Bridges as party leader on the second ballot.

Congratulations are due to the new Leader of the Opposition - and also to his colleagues for electing the first person of Maori descent to lead a major New Zealand political party.

This posting is exclusive to Bowalley Road.
Posted by Chris Trotter at 13:58

Well I think we should congratulate Jacinda. National are now toast, unless Crusher or someone else rolls the wee laddie.

We Nats might have lost the Maori Party but right inside the Party we have our own Whanau. Let the young ones have a go, plenty of time to change if needed.

Oh yes Crikey.....still laughing. B&B Look like a couple of likely contenders for an episode of Shortland Street.

Didn't Norman Kirk have some Ngai Tahu ancestry, or is that just rumour. No historical records appear to deny it. Perhaps some learned and informed Bowalley Road disciple can throw some light.

I guess National have finally moved on from "Not very good under a high ball." Which is what I understand Holyoake said of Winston Peters, referring to his Maori ancestry such as it is. And in so far as they have done that I must of necessity congratulate them.

I he crosseyed, dazed at what's happened or has Ms Benefit given him a wedgie?

Generous of you Chris to say well done. I concur. The best day will be the day that nobody notices any politicians descent.