When ‘Maintaining The Rage’ Isn’t An Option. 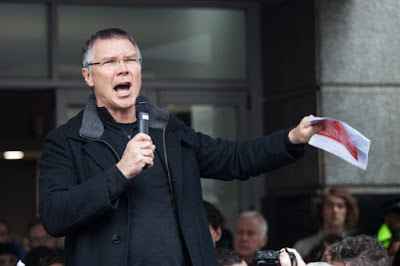 "Just One Of Those Things You Say In Opposition": Had the rage so evident on the streets of Auckland on 4 February 2016 been maintained, Jacinda Ardern, Winston Peters, and Labour’s intrepid Trade Minister, David Parker, would not have found it such an easy matter to renege on the undertakings Labour and NZ First had given on that day when it seemed prudent for Mr Parker to stand outside the US Consulate, microphone in hand, and pledge Labour to the defence of New Zealand’s sovereignty against trans-national corporate predators.

THE HARD-LEFT of New Zealand politics enjoys nothing more than enumerating the shortcomings of the Labour Party. No matter that the hard-left itself represents only a tiny fraction of the electorate (a deficiency confirmed with crushing finality whenever it fields candidates in a general election). Not to worry. This past week [i.e. the week ending 27 January 2018] the Labour-NZF coalition government’s decision to sign-up to the Comprehensive and Progressive Transpacific Partnership (CPTPP) has afforded its hard-left critics multiple opportunities to, once again, rail against the manifold shortcomings of social-democracy.

Were they of a mind, however, the despised social-democrats could mount a telling critique of the hard-left’s own dereliction of political duty. The focus of such criticism would be the hard-left’s failure to “maintain the rage” against the Trans-Pacific Partnership which, in February 2016, had just been demonstrated with truly exceptional power on the streets of Auckland.

So effective had the campaign of the “It’s Our Future” organisation been in rousing public indignation at the TPP’s multiple assaults on New Zealand sovereignty, that the Andrew Little-led Labour Party felt obliged to step away from the long-standing bi-partisan consensus on free trade and come out openly against its ratification. It was joined in this radical oppositional stance by Winston Peters’ NZ First Party and the Greens. Foreshadowed in this ad-hoc anti-TPP multi-party alliance, was the Labour-NZF-Green government sworn into office in October 2017.

Was the hard-left quick to warn the still-fizzing anti-TPP demonstrators that this sudden display of radicalism on the part of Labour, NZ First and the Greens was not to be trusted? Did it urge the movement to shift its focus from the streets of Auckland to Parliament Grounds in Wellington? Was a concerted campaign proposed to pressure MPs directly by besieging the House of Representatives and impeding the Select Committee hearings into the legislation ratifying the TPP? Was the hard-left able, as its predecessors had been in the days of the Halt All Racist Tours organisation, to transform participation in a single day of rage into a permanent reserve army of protestors, capable of being mobilised at a moment’s notice?

Had it been, Jacinda Ardern, Winston Peters, and Labour’s intrepid Trade Minister, David Parker, would not have found it such an easy matter to renege on the undertakings Labour and NZ First had given on the day when it seemed prudent for Mr Parker to stand outside the US Consulate, microphone in hand, and pledge Labour to the defence of New Zealand’s sovereignty against trans-national corporate predators.

So, what did the hard-left do?

Well, it did exactly what it so loudly condemns the centre-left for doing: it attempted to engage constructively with the many and varied processes of institutional power so as to get the firmest possible grip on the levers of political influence. Even now, the effective leader of the anti-TPP movement, Professor Jane Kelsey, is cautioning her followers against precipitate action:

“And yes, I know there are people who want to get out on the streets. We need to think about when and where that might have maximum effect. But we can’t go off half-cocked. People need to be confident that they know why the TPPA-11 is as bad as the original, and believe that their voices collectively can make a difference. And we can.”

The difference between hard-leftists and social-democrats, however, is that although they could mount a critique of the hard-left’s failure to maintain the momentum of the 2016 protests, the social-democrats haven’t. Why? Because they understand that, at some point, rage in the streets must give way to the demands of practical politics.

Once Labour, NZ First and the Greens had all publicly committed themselves to opposing the TPP – as currently configured – the hard-left’s ability to turn people out into the street evaporated almost immediately. Maintaining the rage for months on end was never an option.

Fighting TPP was quite unlike fighting Apartheid – which could be relied upon to keep the world horrified with its constant and ever-worsening acts of racial oppression. A year ago, when Donald Trump pulled the USA out of the TPP, most of its opponents – and even some of its supporters – believed it was dead. And yet – it lives!

The tenacity with which the proponents of the TPP have fought for their project should, perhaps, cause the hard-left to pause from their castigation of Labour and its allies. Is it really credible to suggest that so many countries have worked so hard, for so long, to secure their own economic and political subordination?

Perhaps, once they had made themselves familiar with their fellow CPTPP partners’ arguments, Ardern, Peters and Parker realised that ‘maintaining the rage’ wasn’t an option for them either. Perhaps, in the face of massive Australian and Japanese economic pressure they reluctantly settled for the best deal they could get.

This essay was originally published in The Press of Tuesday, 30 January 2018.
Posted by Chris Trotter at 12:23


"Once Labour, NZ First and the Greens had all publicly committed themselves to opposing the TPP – as currently configured – the hard-left’s ability to turn people out into the street evaporated almost immediately. Maintaining the rage for months on end was never an option."

Surely what happened is that in securing a labour/NF/ Green government the TPP opponents believed they had achieved what the best could have hoped to achieve. To discover that it didn't make a blind bit of difference is bound to leave the movement in a perplexity . Wad-a-we-do-now ? To say nothing of the feeling of hopelessness generated. What the hell can they do? You vote for a party that seems to pin it's beliefs to a certain position and when it's elected the position is gone by lunchtime. The only message is you'r wasting your time and energy demonstrating or even voting.
Cheers D J S

Chris, before I read your piece, I believed that:
"all political parties in NZ are as pure as driven snow".
I am now shattered.
I clutch at straws.
Surely Winston is a honest man?.

OK. Let's accept that the current coalition government weighed up the odds and ended up in favour of signing, and settling for "the best deal they could get." You point out that the other countries involved in negotiations would hardly "work so hard, for so long, to secure their own economic and political subordination", but do not seem to consider the possibility that negotiators may have worked "so hard, for so long", to secure a deal for elites like themselves, while "reluctantly accepting" the economic and political subordination of fellow citizens who are not like themselves. However, even in that case, signing could still be preferable to whatever punishment or side-lining that may go with not signing, especially if you do not have a solid majority who are willing to take what comes rather than see the deal signed.

BUT, characterising the TPP's opponents as "hard left" and socially liberal centrists as "social democrats" glosses over the forces that are at play here. There is certainly a place for continued scrutiny of, and opposition to the TPP, even if signing it really is the reasonable thing for the government to do under the circumstances.

"to secure a deal for elites like themselves, while "reluctantly accepting" the economic and political subordination of fellow citizens who are not like themselves."