“Nothing Without A Demand” The Need For A New Union Movement. 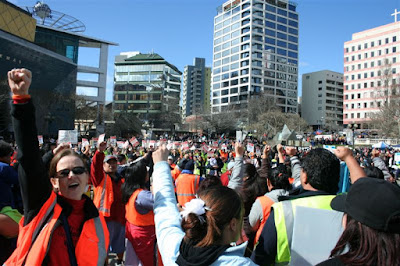 “If there is no struggle, there is no progress. Those who profess to favour freedom, and yet depreciate agitation, are men who want crops without ploughing up the ground. They want rain without thunder and lightning. They want the ocean without the awful roar of its many waters. This struggle may be a moral one; or it may be a physical one; or it may be both moral and physical; but it must be a struggle. Power concedes nothing without a demand. It never did and it never will.” - Frederick Douglass

FOR 27 YEARS wage workers in New Zealand have been forced to endure “labour market flexibility”. In the guise of, first, the Employment Contracts Act (1991) and then, the Employment Relations Act (2000) a workplace regime specifically designed to advantage employers has steadily whittled away workers’ collective economic security.

Their legal power to act as a class, by striking in solidarity with other workers engaged in industrial action, has been nullified by the legislative strategies of both the National and Labour parties. The consequent engorgement of employer power has fundamentally redrawn the contours of class relations in New Zealand. Until they are redrawn again – this time in the workers’ favour – New Zealand society will continue its long, slow slide into narcissism and cruelty.

So entrenched has the employers’ advantage in the workplace become that the Labour-NZF coalition government’s promised restoration of the core content of the Employment Relations Act: those rights steadily whittled away during nine years of National Party rule under John Key and Bill English; is being represented by the employers as an example of how “ideology rather than solid public policy [is] driving decisions”.

The bare-faced affrontery of this assertion is stunning. As if the Employment Contracts Act wasn’t the product of the most clear and uncompromising ideological calculation. The Act was widely regarded as a legislative marvel, celebrated by right-wingers around the world as the most effective means of taming the unions (short of deploying tanks and guns) which the promoters of “free markets” had yet devised.

Its successor, the Employment Relations Act was, if anything, even more ideological. Its Labour Party sponsors took care to give just enough – but no more – to the battered trade union bureaucracies. The changes contained in the Act permitted what remained of the New Zealand trade union movement to survive – but not thrive. What it most emphatically did not do was encourage the mass re-unionisation of the workforce, with all that implied about bringing ordinary working people back onto the country’s political stage.

Not that the surviving union bureaucracies would have been at all keen to see such a decisive shift in power relations. Prior to the Employment Contracts Act, the “electorates” of the major trade unions ran into the tens-of-thousands. To become a union secretary (the equivalent of a CEO) one had first to be elected by the rank-and-file membership. This could involve anything up to 35,000 union electors being eligible to cast a postal ballot. Today, union leaders are elected by a few dozen hand-picked conference delegates.

The annual conferences of the old Federation of Labour (1936-1989) which attracted hundreds of politicised working-class delegates have been replaced by the profoundly undemocratic Council of Trade Unions’ biennial get togethers. Gatherings that seldom attract more than fifty souls – most of them paid union officials.

It’s facts like these that make the National Party’s claim that the Labour-NZF Government’s reforms will “return us to 1970s-style adversarial union activity” so utterly nonsensical. The “Fair Pay Agreements” which, of all the proposed changes, come closest to resurrecting the bargaining structures of the 1970s, cannot be secured by industry-wide strike action. The employers have the Prime Minister’s word on that.

What’s more, the National Party’s Workplace Relations and Safety spokesperson, Scott Simpson, has stated bluntly that: “The Employment Relations Amendment Bill will go down as one of this Government’s biggest economic mistakes and a future National-led Government will repeal the provisions”.

The rights of working people will thus be traded back and forth like chips on the political poker table. Neither National nor Labour are really interested in hearing how workers themselves would prefer the modern workplace to be organised, or in learning about ways that the twenty-first century economy, with all its technological miracles, might be so regulated as to ensure that the benefits of robotics and artificial intelligence accrue to the benefit of the whole population – and not just to the shareholders of the transnational corporations who own the patents.

What will it take for that to happen? Well, it will take a lot more than simply voting for the Labour Party, the Greens or NZ First. [Who are already showing signs of backing away from Labour’s proposed reforms.]

The first step towards the construction of a new union movement is a commitment to learn from the past. Grasping the key historical fact that the trade unions were not the creation of the Labour Party; the Labour Party was the creation of the trade unions. That only a broad-based and independent workers’ movement can generate the necessary industrial and political heft to ensure that the interests of working people are not simply shunted aside by the bosses and their enablers.

Such movements have happened before in New Zealand history. Massive waves of unionisation, often followed by militant industrial struggle, during which the employing class was given good reason to fear the power of organised labour. In place of strife, the employers were moved to search for some way of living in peace with the trade unions: an arrangement that was capable of benefitting both parties to the employment relationship. Absent that fear; absent that independent organisation; neither of the major political parties will feel under the slightest obligation to address the interests of working-class New Zealanders. National will look after its own, and Labour will look after itself.

Frederick Douglass (1817-1895) the freed African-American slave and tireless toiler in the anti-slavery cause, wrote movingly of the unavoidable nature of struggle:

“If there is no struggle, there is no progress. Those who profess to favour freedom, and yet depreciate agitation, are men who want crops without ploughing up the ground. They want rain without thunder and lightning. They want the ocean without the awful roar of its many waters. This struggle may be a moral one; or it may be a physical one; or it may be both moral and physical; but it must be a struggle. Power concedes nothing without a demand. It never did and it never will.”

This essay was originally posted on The Daily Blog of Tuesday, 11 September 2018.
Posted by Chris Trotter at 13:57

Spot on. The usual suspects are trotted out to say that it's going to be bad for the country and bad for labour relations and the workers. Similar to when landlords face legislation restricting their ability to exploit renters. It'll be bad for the tenants they say. Bullshit. And if Winston is against it, let's hope those who support him yet claim to be working-class abandon New Zealand first. I doubt it myself, because I can't believe they're genuinely working class. But let's see.

Our biggest problem is to gain traction, and that is not easy in a voluntary situation. The ECA made unionism voluntary by compulsion. We may have to wait for a second term of coalition govt with a stronger Greens than NZF.

Frederick, one of the best men of Clan Douglas, including the 'Duke of Touraine' with his 10,000 Scots mercenaries who actually sent the English home, rather than teenage Joan of Arc, in the Hundred Years War.

That he had a slave-driver or owner named Douglas is a shame to Alba, but he is one of the best of us Scots.

Such fight and understanding on his part. My and my family's love of comfort, unless our toes are stepped on, is delinquent.

It would have helped (though maybe only in my mind, where you are a great orator for the people) if you had vociferated for the nurses' strike/end to budget responsibility rules rather than the freedom of speech thing.

If the goal is to lift the living standards of New Zealand workers then the left should have been supporting the nationalist cause. As it is this is outside the Overton Window.
But, as a recent NZ Herald editorial noted, Southern and Molyneux's views are easily accessed online and not all "have a right to room on other platforms that try to serve the public interest".
https://www.nzherald.co.nz/hawkes-bay-today/opinion/news/article.cfm?c_id=1503459&objectid=12101943

The laws of supply and demand work on labour markets - it's as simple as that.

I think that the 'laws' word is being used loosely here. When the pay or workers is left to a free market supply and demand situation, and the free market chooses to weight the supply side heavily it changes the clarity and simplicity of such a 'law'. When there are no reasonable laws preventing this action which has many extra consequences, it becomes obvious that there is no law in the real sense, just a term that gets tossed around by economists.

Peter petterson: actually, it wasn't the ECA that made union membership voluntary - that was the Bill of Rights Act 1990 - specifically section 17 - the same section that allows unions to exist. The right to freedom of association includes the freedom not to associate. The Employment Contracts Act merely applied section 17 to employment law

There is no amount of employment law tweaking that can overcome that. And I'd rather we don't have parliaments tweaking the Bill of Rights act to force people to join organisations they may not otherwise want to.