The Theatre Of Cruelty. 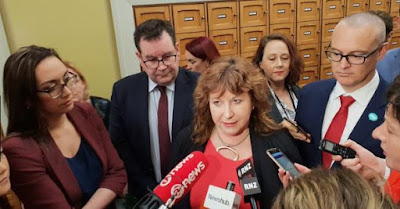 A Spectacle Of Punishment: Clare Curran’s fate: public, prolonged and filled with intense emotional pain; was out of all proportion to her transgressions. As always in the Theatre of Cruelty, we were treated to the spectacle of hate without cause; punishment without mercy; and the unimpeded triumph of institutional sadism.

“HARDER! HARDER! I want to hear her scream!” The awful images and dialogue from that late-night arts documentary, broadcast forty years ago, were unforgettable in the worst way. One of those highbrow British television networks was examining the “Theatre of Cruelty”: an artistic movement born out of the surrealist revolution of the 1920s and 30s which was making something of a comeback in the work of the French playwright, Jean Genet. The scene seared on my memory was an out-take lasting only a few seconds: but those few seconds were enough.

The shock-factor intrinsic to the Theatre of Cruelty was intended to demolish the smug assumptions of its audiences by exposing the violence and sadism lying just below the surface of everyday life. The playwright’s purpose was to lay bare the cruelty embedded in the institutions that educate, employ, entertain and govern us. It certainly had that effect on me, a callow youth of 16 or 17. The sheer delight with which one of the characters urged on the torturer to new heights of depravity was profoundly affecting.

Why am I reliving all this? Because the recent treatment of Clare Curran brought it all back. The Theatre of Cruelty and contemporary politics have converged in a truly alarming fashion.

What distinguishes the Theatre of Cruelty from traditional theatre is its rejection of the classical precepts of dramatic art. Traditionally, plays are both a representation and an affirmation of the accepted moral order, in which those who seek to overthrow or evade its strictures are judged and punished. Or, more colloquially: drama is about reassuring us that the good guys always win. In the Theatre of Cruelty, however, not only do the good guys not win, but they are subjected to the most appalling torments by the bad guys – who are not judged or punished in any way at all.

The parallels with contemporary politics are, hopefully, clear. What start out as morality plays: demonstrations of what happens to politicians when they break the rules; very quickly degenerate into something quite different. The villains of these political morality plays, it soon transpires, are, like Shakespeare’s King Lear “more sinned against than sinning”. Their fates: public, prolonged and filled with intense emotional pain; are out of all proportion to their transgressions. As always in the Theatre of Cruelty, we are treated to the spectacle of hate without cause; punishment without mercy; and the unimpeded triumph of institutional sadism.

The surrealist pioneer of the Theatre of Cruelty, Antonin Artaud, envisaged an entirely new configuration of the theatrical experience. He wanted his audiences huddled in the middle of the auditorium with the players performing not in front of them but all around them. His direction also called for them to be bombarded by all manner of startling special effects – to the point where their senses were overloaded and they became disoriented.

A more vivid anticipation of the twenty-first century media experience is difficult to imagine. Artaud wanted his audiences to be at the mercy of his players; to dissolve the boundaries, both physical and psychological, which conventional theatres use to keep the audience safe from the action on stage. But, it is precisely the absence of boundaries – most particularly moral boundaries – that defines the experience of contemporary social media. The players are, as Artaud foresaw, all around us, and their viciousness is without restraint. We are transformed into witnesses of cruelties from which we cannot turn away.

The damage caused by this extraordinary environment is difficult to assess. That a few seconds exposure to the Theatre of Cruelty’s horrors left such a deep scar on the imagination of my teenage self makes me wonder what the ubiquitous and almost casual cruelties of twenty-first century media are doing to the imaginations of today’s teenage viewers. What sort of moral order is being communicated in the very public crucifixions of politicians, sportspeople and every other variety of celebrity? And what do these endlessly repeated spectacles of punishment tell us about the tastes of the contemporary citizen?

Forty years ago, we looked back with a mixture of superiority and horror at the vast crowds which once gathered to watch public executions. Forty years later, in our panoptic on-line dystopia, Artaud’s intuitive apprehension that the virtues of civilisation are barely skin-deep can only be described as cruelly prophetic.

This essay was originally published in The Otago Daily Times and The Greymouth Star of Friday, 14 September 2018.
Posted by Chris Trotter at 11:12

Clare Curran was the architect of her own misfortunes. She should never have been in Cabinet in the first place.

"Why am I reliving all this? Because the recent treatment of Clare Curran brought it all back. The Theatre of Cruelty and contemporary politics have converged in a truly alarming fashion."

I'm sorry Chris, but you used to be able to be relied on to provide a fair and balanced argument, but you have truly lost the plot of late.
The fact that you are listing the treatment of Clare Curran as being a sort of turning point presumably means you think that it is only National that has gone down this path.
The truth is that all political parties are guilty at pecking at the vulnerabilities of their opponents like chickens at a spot of blood. To suggest otherwise is simply absurd at best and downright dishonest at worst.

I consider the treatment of Curran to be relatively mild considering just how utterly incompetent she has been. Having not learnt her lesson with Hirchsfeld, she doubled down with Handley all the while playing it fast and loose with GMail.
If you want to see a genuinely unbiased look at this idiot's behaviour, head over to No Right Turn.

If Curran can't handle the relatively mild pressure she was placed under, she is better off leaving parliament and certainly Labour would be better off too.

Please try to move back to reality Chris. I miss your more sensible musings.

Clare Curran is a kind person with a warm heart that really cares for her people. I have met her several times and can attest to that, and her hard work. The way she has been treated is a warning to us all of the dangers of testing your principles in the public sphere that can resemble a snakepit. I hope she is back soon.

With regard to her "misdemeanors" I have to question the capabilities of her "minders", I'd be shooting them.

If Curran wanted to avoid the bumbling fool tag, she should have read a prepared statement to the House.

She makes herself look bad and her opponents respond like a shark detecting blood in the water.

Of course the media chime in for all its sensation and worth.

Claire Curran aside, and I know very little about the whole affair TBH, I'd rather we brought stuff out into the open than had the "gentleman's agreement" that we used to have between politicians and the press about their peccadilloes. Where all sorts of minor corruption was ignored, particularly National party corruption if my memory serves.
To paraphrase an Internet meme "All we claim is to represent the people, and all of a sudden we're held to a higher standard."

This had NOTHING to do with testing her principles in public. She was brought down by her own incompetence and dishonesty.
Next you will be blaming Mekas victim for having been man handled.

Chris, there is an excellent filmed version of the Maids available.... on some sites on the internet. Full versions in some places, if it is not down at your local library.

Poor Clare lost within the game. She committed fouls and the referee sent her off. Sad, but that's the way it's always been.

Kay's, you are right she was incompetent, that's something we might say about lots of parliamentarians. What keeps most afloat is good "minders" who ride shotgun and Marshall the ministers. I can tell you now in some correspondence with another minister I experienced total nativity in terms of process. Fortunately I was not the enemy.