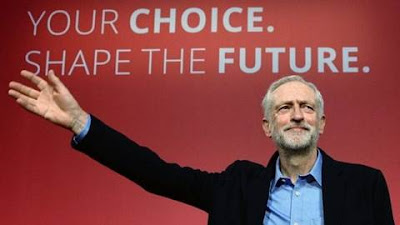 The Ghost Of Futures Passed: Does Jeremy Corbyn have the political ability to rise above his preoccupation with Labour’s past? Can he recast himself as the progressive champion of the UK’s European future? That would require him to align himself unequivocally with the Remainers by forcefully demanding a second referendum. It’s a big ask. But, surely, he understands that those who hesitate to climb on board History’s bus when it pulls up at their stop invariably get left behind.

JEREMY CORBYN’S fatal political error has been to look over his shoulder rather than over the horizon. As is so often the case with politicians who have had their party’s agenda wrenched from their hands by ideological rivals pursuing radically different goals, the temptation to start again from where they were forced to leave off is very strong. The 1980s Labour Party of Michael Foot and Tony Benn – the lodestars of Corbynism – was taken over and completely reshaped by Tony Blair in the 1990s. Rolling back Blairism and resuming Labour’s march towards democratic socialism has always been Corbyn’s mission. It was not, however, the mission imposed upon Labour by the relentless march of events. That, it turns out, is Brexit.

Corbyn has always been deeply conflicted by the evolution of the European project. Originally conceived as a means of preventing the powerful nations of Western Europe from ever again going to war with one another, the European Economic Community (EEC) had much to commend it. Its transformation, from the EEC into the European Union (EU), changed perceptions considerably. What began as an essentially social-democratic dream has morphed into what more and more leftists have come to regard as a neoliberal nightmare.

This trajectory (from social-democracy to neoliberalism) was, of course, mirrored in the domestic histories of practically all of the EU’s member states. Corbyn’s assessment, that a rejection of neoliberalism in the UK would be next-to-impossible if it remained an EU member, made him a very tepid advocate of his party’s official policy of encouraging Labour supporters to vote “Remain” in the 2016 Referendum. That so many of Labour’s heartland constituencies favoured the “Leave” option didn’t make things any easier.

Theresa May’s doomed attempt to increase the Conservative Party’s majority in the House of Commons by calling a snap-election in 2017, poured almost as much acid on the Leader of the Opposition as it did on the Prime Minister. Labour’s astonishing electoral performance was partly fuelled by its immensely popular “For the Many, Not the Few” manifesto, which, like Bernie Sander’s “democratic socialist” platform of the previous year, inspired and enthused tens-of-thousands of young, well-educated, but economically marginalised, voters. Mostly, however, Labour’s success was built on these younger voters’ conviction that Labour represented a forward-thinking alternative to the Tories’ reactionary “Little Englander” Brexiteers.

In the minds of the only voters that truly mattered – the ones who would spend most, if not all, of their lives in the Twenty-First Century – Labour stood for an open-hearted, multicultural and European future. If Labour wanted to endure as a viable political force (rather than a declining legacy party of Britain’s industrial past) then it had no choice but to make those young voters’ perceptions reality. Tragically, Corbyn was too mired in the politics of the Twentieth Century to rise to the challenge. Rather than lead the debate against Brexit; rather than mobilise his young supporters behind the call for a second referendum; Corbyn equivocated – and thereby surrendered the initiative.

What is currently unfolding in the UK is the direct consequence of Corbyn’s error.

Any politician who can count has worked out that for the Prime Minister to secure her “Brexit Deal” all she has to do is run down the clock to the point where the Labour Party – absolutely opposed to the UK “crashing-out” of the EU with no deal – is left with no alternative except to give May what she wants.

If Labour swings-in behind May’s deal, the Tory Brexiteers’ leverage instantly disappears. Would the humiliation of being outmanoeuvred by May and Corbyn cause the Brexit hardliners in the European Research Group to split the Tories? Of course! But the sheer intractability of the Brexit crisis has for some time indicated that some sort of break-up of the Conservative Party is unavoidable. It seems pretty clear that May accepts this. Willing to settle for the historical legacy of being the PM who fulfilled her “sacred duty” to take the UK out of the EU, May seems ready to ‘retire hurt’: limping, but with her head held high.

With the Conservative Government hopelessly divided, and May’s parliamentary majority in tatters, a new election becomes inevitable. Nothing could better please Jeremy Corbyn and his followers. With the Tories torn and bleeding, Labour would be swept to victory. Safely removed from the EU’s clutches, the battle against British neoliberalism could then begin in earnest.

This is the terrifying prospect that caused first the Labour Right, and then the Tory Left, to step forward as the vanguard of a new electoral force conceived to achieve two, brutally simple, strategic objectives. The first: To prevent, by any means necessary, Corbyn’s democratic-socialist Labour Party from taking power. The second: To secure, with all possible speed, the UK’s membership of, or re-admission to, the EU.

What the world is currently witnessing in the UK, is the “pre-emptive split” that simply has to happen if the looming, uncontrolled, disintegration of the British Right, and the left-wing victory such an unmediated break-up will permit, is to be circumvented.

As always, to save the Right, the Left has first to be rendered electorally harmless. Look, then, for the rise of a British version of Emanuel Macron’s “Le Republique En Marche” – a media-driven, City of London-funded, manifestation of the so-called “radical centre”.

It’s not as if such a re-alignment has never happened before. To get the UK through the Great Depression of the 1930s, without capitulating to the far-Right or the far-Left, required the formation of a “National Government” – led initially by the renegade Labour Leader, Ramsay MacDonald, but held up by the votes of the shires. The Labour Party proper was reduced to an impotent parliamentary rump. It required the massive social and economic upheavals of the Second World War to restore Labour to electoral competitiveness.

Clearly, there is still a great deal to do before this unfolding political re-alignment can be brought to a satisfactory conclusion. What its organisers need most is time.

And time, strangely enough, is precisely what the EU leader, Donald Tusk, appears to be offering Theresa May. The last thing the EU’s German and French masters want to see is a securely entrenched democratic-socialist government unsettling the people of Europe from the other side of the English Channel. The EU looks set to give the UK’s political class all the time it needs to prevent such a dangerous development.

Does Corbyn have the political ability to rise above his preoccupation with Labour’s past? Can he recast himself as the progressive champion of the UK’s European future? That would require him to align himself unequivocally with the Remainers by forcefully demanding a second referendum. It’s a big ask. But, surely, he understands that those who hesitate to climb on board History’s bus when it pulls up at their stop invariably get left behind.

In the end, Corbyn’s obsession with fighting yesterday’s battles may only make it easier for yesterday’s enemies to win again.

This essay was originally posted on The Daily Blog of Sunday, 24 February 2019.
Posted by Chris Trotter at 10:55

I believe the UK should never have joined the EU, a common market trade deal was good enough. Didn't do us any favours. We are now shackled to China, and I don't like it or its influence. See what they influenced recently in Fiji.