The Greatest Crime In Human History? 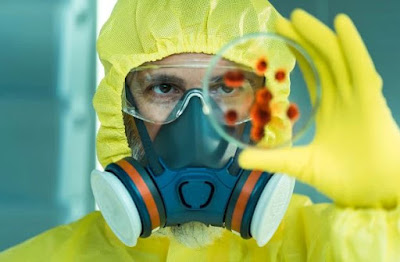 Humanity's Fate In Criminal Hands: How many years would it take, I wonder, before the greatest criminal act of human history – the deliberate release of a genocidal virus – came to be regarded as the singular, terrible, but absolutely necessary, act which prevented an incorrigibly rapacious human species from cooking itself, and just about every other living thing on Planet Earth, to death?

IT WOULD BE the greatest crime in human history. The ravages of Genghis Khan’s armies; the anguish of the slave trade; Mao’s “Great Leap Forward”; Stalin’s purges; Hitler’s Holocaust; the combined death tolls of World Wars One and Two: all of these nightmares would pale in comparison. The great pandemics of history: the Black Death especially, which carried-off between a third and a half of the human communities it infected; might come closer. But, only in the Western Hemisphere has humankind ever experienced anything remotely like the crime I’m about to describe.

It is estimated that the human population of the Americas in the years immediately prior to the arrival of Europeans in the late Fifteenth Century stood, conservatively, at 30 million. By the time the microbes unleashed upon the indigenous peoples of North and South America by their European carriers had done their work, that figure had plummeted to less than 5 million. Within a century, Europe’s viral exports had reduced the human population of the Americas by between 80 and 90 percent.

So overwhelming was this sudden depopulation of the Americas that it ended up affecting the global climate. Human communities across the Americas had relied upon wood for heating and construction. Forest clearance was also necessary for the cultivation of crops. The sudden elimination of millions of human beings, leading to the disappearance of entire communities, led to the rapid advancement of forests across thousands of square miles on both continents. The increased sequestration of carbon which resulted from this natural process of reforestation lowered the level of atmospheric CO2 and triggered what became known as the “Little Ice Age” of the Seventeenth Century. Some scientists are even arguing that the sudden depopulation of the Americas marks the true beginning of the Anthropocene – the current geological age, in which human-beings are themselves responsible for generating planet-wide ecological change.

To the worst criminal in human history, the terrible fate of the indigenous peoples of the Americas would likely prove cruelly instructive. A highly contagious viral infection, against which human-beings possess absolutely no defence, is clearly capable of wiping out close to 100 percent of any population it infects. Assuming the motive for the world’s worst criminal is a determination to save the biosphere’s other life forms, the catastrophic depopulation of the America’s during the Sixteenth Century offers another lesson. Eliminating 80-90 percent of humanity at speed may be the only means of sequestering sufficient carbon to arrest the effects of anthropogenic global warming. Combined with the sudden cessation of virtually all industrial pollution, the unchecked growth of forests might just be enough to save the planet.

Who could do such a thing? Well, the criminal would have to be extremely wealthy. Rich enough to hire microbiologists sufficiently skilful to develop not only a humanity-winnowing virus, but the vaccine required to ensure that the “right” people survived it.

Some Silicon Valley billionaire with a God complex, perhaps? He might even have bought a huge chunk of New Zealand’s South Island high-country to hide in when the bodies start falling. It’s even possible that this genocidal billionaire might decide to turn New Zealand into a human ark: the place where humanity’s seed-corn can be kept safe for the moment when a terribly chastened, but indubitably wiser, “Humanity 2.0” can begin again.

How many years would it take, I wonder, before the greatest criminal act of human history – the deliberate release of a genocidal virus – came to be regarded as the singular, terrible, but absolutely necessary, act which prevented an incorrigibly rapacious human species from cooking itself, and just about every other living thing on Planet Earth, to death?

This essay was originally posted on The Daily Blog of Thursday, 28 February 2019.
Posted by Chris Trotter at 11:38

"The Kids".... are already ahead of you on this front: The Avengers: Infinity War:

The main bad guy here is Thanos, who is seeking all of the Infinity Stones so that he can kill half of all life in the universe. He's already been practicing mass killings on multiple planets but like Himmler, has found that the traditional ways are slow. Hence the Infinity Stones.

No more starvation or ecological despoilation.

He succeeds and is last seen sipping a drink on the porch of some house on some pretty planet while watching a sun set.

It's made over $2 billion at the box office, world wide and they're gagging for the sequel.

The really good news is that Thanos has become perhaps the most hated villian ever in the Marvel Universe. All the young folk I know want him to not just be killed but everything about him wiped from the universe. I find that comforting.

I think this is science-fiction. Mind you, on the whole science-fiction it seems to me is a better predictor of what's going to happen than professional futurists. But even so I think it's a bit far-fetched.
As far as the Americas go, I remember being put firmly in my place by prof Sinclair during a discussion about civilisation in which I said that South American civilisations were probably the equivalent of at least the ancient Greek ones. Nice to know that research has proven me correct. There was an interesting article about this in the Atlantic about maybe 15 years ago. I remember doing a fist pump and saying... Yes! Unfortunately Sinclair was dead by then.

Chrisseme, reality and the sellability of it. Only worse, the 'powers that be' deciding. But it's bad. As we suggest we in the broadest sense must be in charge. More than '35. Being pragmatists we take their lolly scrambles but now we must wrest the wheel from the powerful. If NZ is to survive intact in its best nonsense.

I'm not comforted that you are comforted Tom Hunter. The kids are confused about what a pragmatic hero should do. What are they like in a conflicted
situation where the best thing for two-thirds of them is to die? It would be like reality tv only there would be no lucrative contracts for the stayers. What are you like in a conflicted situation where there is no easy answer?

Can we start getting people to limit their families? I know in many countries citizens are below replacement level. But people with chronic genetic illnesses - is there a limit on their reproduction? Can we reduce that to one and then a hysterectomy and vasectomy? Can the general public also be limited. Will sex become a burden and be propagandised
against? It seems that no-one wants to think about reducing numbers. Should we be asking the makers of Z.... if they still have the recipe for the Holocaust in the vaults?

Patience please, no virus required. Put quite simply we eat oil. Oil fuels tractors, fertiliser etc. No oil, back to horses etc and a fraction of the food production. Mass starvation. I simplify but in essence that's the story. Oil has peaked and is in decline. We will follow.

And Pakeha did not bring plagues to New Zealand ?

Introduced diseases and firearms were to blame. Guns Germs and Steel. Just look what happened on Rekohu.

I think it is more likely a Green warrior will introduce a mass killer virus. Why? Because they have an inhuman religion, a human hating creed which despises and resents humanity above all.

They are historically and scientifically ignorant children who worship Mother Nature as a Goddess, one they feel is being raped by mankind, so see us, but especially white men, as an evil pestilence.

These people are the latest pathology from the far left, whose sires led to the death of 150 million last century by unleashing class & race identity politics, on a grand mission to create their utopia. The Gulag & Mao's China were their children.

They are at it again in the West, where it came from before, and now their allies are the bitter losing enemies of the liberal & enlightened West: Authoritarian China, Russia (their creations remember) & now even more disgustingly, the misogynist, racist, genocidal Islamist world. Fascinating to watch the illiberal, intolerant and bigoted far left, so consumed by hatred for the West, embrace these fascists to advance their new pseudo-religion, to save us by killing us.