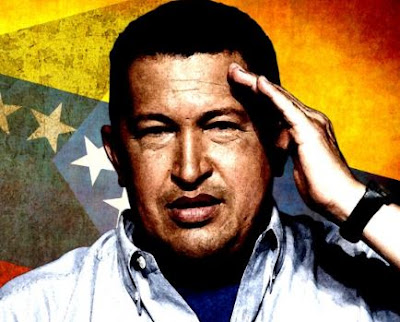 Wrong Sort Of Soldier: America has no real objections to military officers, like Hugo Chavez (above) meddling in politics. Indeed, if the history of the last 100 years teaches us anything it’s that the US rather prefers military to civilian rule in Latin America. What “El Norte” does insist upon, however, is that the military officers in question be staunch supporters of the United States and the capitalist status quo – in that order.

VENEZUELA is not a socialist state. Under its beleaguered president, Nicolas Maduro, the private sector controls a larger percentage of the Venezuelan economy than the British private sector managed under Margaret Thatcher. Venezuela’s principal income earner, Petroleos de Venezeula S.A. (PDVSA) is, like Norway’s Statoil, publicly owned. It was not, however, nationalised by Maduro, nor by his charismatic predecessor, Hugo Chavez. PDVSA was set up 43 years ago by the social-democratic administration of President Carlos Andres Perez. In 1976, Chavez was just 22 years old; a politically invisible army officer, only recently graduated from the Venezuelan military academy.

No less a genuine socialist than the late Fidel Castro, well aware of the consequences of attempting to establish socialism in the Western Hemisphere, is on record as warning his Venezuelan comrades against over-indulging in fiery left-wing rhetoric at the expense of achieving substantive improvements in the economic and social performance of the nation. Maduro and his United Socialist Party are now paying a very high price for their failure to heed Castro’s advice.

Life was easy for Chavez and Maduro when the price of oil was high. Massive transfer payments to Venezuela’s poorest citizens brought them immediate and impressive relief. The “Bolivarian Revolution”, as Chavez liked to call his redistributive efforts (after Simon Bolivar, the heroic liberator of South America from the Spanish Empire) seemed to be as successful as it was effortless.

Until, suddenly, the price of oil collapsed.

Only then did Maduro grasp just how big a mistake he and his United Socialists had made. Economies like Venezuela’s all-too-easily become the victims of their own good fortune. The massive export revenues derived from a valuable commodity like oil strengthen the national currency to the point where it becomes virtually impossible for local producers to compete with the cheap imports pouring into the country. All well and good while the currency remains strong. Not so great, however, when plummeting export prices undermine the currency’s value and send the prices of imports rocketing skyward.

It was Maduro’s attempt to fix the exchange rate of Venezuela’s currency that proved his undoing. His political enemies very rapidly learned how to game the President’s hastily improvised currency and price controls. Inflation, which had been set to rise sharply as the price of imports soared, was super-charged by the debilitating economic impacts of Venezuela’s burgeoning black markets.

And all of this, remember, was happening in a political climate characterised by uncompromising class conflict. Not, as the enemies of Maduro and his United Socialists would have you believe, a struggle inaugurated from below, but from above. Chavez’s democratic mobilisation of the urban poor against the entrenched political power of the Venezuelan elites earned him their instant, bitter, and undying hatred. From the moment he was sworn in as President, the wealthiest layers of Venezuelan society have done everything within their power to drive him and his Bolivarian “revolutionaries” from office.

In this enterprise they have been able to rely on the constant and massive support of the United States. America has no real objections to military officers, like Hugo Chavez, meddling in politics. Indeed, if the history of the last 100 years teaches us anything it’s that the US rather prefers military to civilian rule in Latin America. What “El Norte” does insist upon, however, is that the military officers in question be staunch supporters of the United States and the capitalist status quo – in that order. It took Soviet nukes to keep Cuba’s left-wing Comandantes, Fidel and Che, from falling victim to American imperialism. Whether Vladimir Putin’s Russian Federation can do the same for Maduro and his comrades remains to be seen.

Not that Maduro’s fate is likely to be decided by nukes. Back in the early 1970s, when the US was confronted with another democratically-elected socialist president, Chile’s Salvador Allende, the then US President, Richard Nixon’s, advisers told him to make the Chilean economy “scream”. It worked then, and it’s working now.

The demise of the Chavez/Maduro Bolivarian Revolution will be the consequence not of too much socialism, but too little. Combine a commodity-based capitalist economy with a left-wing government too inept to transform it from a vulnerable price-taker into a resilient price-maker, and the outcome is all-too-easy to predict.

Socialist rhetoric, without socialist substance, produces both the sweetest poetry – and the bitterest disappointment.

This essay was originally published in The Otago Daily Times and The Greymouth Star of Friday, 8 February 2019.
Posted by Chris Trotter at 12:12

Interesting point, as in "We live in interesting times."
Combine a commodity-based capitalist economy with a left-wing government too inept to transform it from a vulnerable price-taker into a resilient price-maker, and the outcome is all-too-easy to predict.

Under its beleaguered president, Nicolas Maduro, the private sector controls a larger percentage of the Venezuelan economy than the British private sector managed under Margaret Thatcher.

Well there's the solution. Clearly that's failing and should be nationalised by the Maduro government like the telecom and electricity companies. Obviously even a socialist government could not manage these businesses, large and small, any worse than their private sector owners.

Of course I would love to see the links demonstating this "fact". On DuckDuckGo the first article I get is some Associated Press report from several years ago, repeated on Fox News, and it talks about % of GDP. I'm not sure one can even accurately measure GDP as a whole in a hyper-inflationary economy, let alone get a handle on the actual worth of prices, wages, investments and all the rest.

Amazing isn't it how oil effects a political economy. How many countries have made the long-term decision to think about what happens when oil is finished one way or another. Norway put its oil revenues into a fund. I do believe Saudi Arabia has tried to think about this but seems to have done very little. Alaska at least distributes the oil revenues to its citizens. Where did New Zealand's oil revenue go to? Straight into the Consolidated fund I imagine. No forethought, no imagination. This country has suffered from short-term thinking for years – I think since the first Labour government disappeared maybe?

Socialism/communism has never worked anywhere or at any time in the history of the World.
Maduro is a madman.
He is well fed.
Mothers, children, families are in desperate straights.
The Americans should attack and take control.
Create free elections.
Depart.

"The Americans should attack and take control.
Create free elections.
Depart."
Like they did in Iraq? Like they did in Afghanistan? There still isn't any democracy worth speaking about, they can't provide electricity for their own people, and the Americans are still there. And so are New Zealanders thanks to our arse kissing governments. Jesus Polly, do you ever read the papers or anything?

You will surely enjiy playing this intense game which you could use fantasy and creativity
and at the same timee enjoy and relax. Somee addicts evn created stories, acted as blocks themselves, made very funny videos aand uppload to youtube.
The Minecraft creatures are probably the most critical options that come with the spot
which makes it morre interactive, intriquing, notable and full of challenges.