Where Britain Goes With Huawei, We Can Go Too. 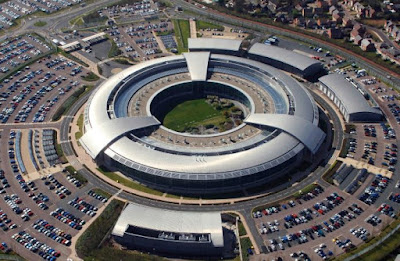 Where She Stands, We Stand: For reasons which would, undoubtedly, be very interesting to discover, the UK’s Government Communications Headquarters (above) and its National Cyber-Security Centre, have given the Chinese tech-giant, Huawei, a pass. Prime Minister Ardern now has the excuse she needs to step back from the brink of diplomatic and economic disaster, by instructing our own Government Communications Security Bureau to give a similar pass to Spark-Huawei’s interrupted 5G deal.

A WAY OUT of our deepening rift with China has opened up. Courtesy, remarkably, of the United Kingdom. Historically, it has been New Zealand which rushed to Britain’s rescue. This time, it’s the other way ‘round.

For reasons which would, undoubtedly, be very interesting to discover, the UK’s National Cyber-Security Centre (NCSC) has given the Chinese tech-giant, Huawei, a pass. Prime Minister Ardern now has the excuse she needs to step back from the brink of diplomatic and economic disaster, by instructing our own Government Communications Security Bureau (GCSB) to give a similar pass to Spark-Huawei’s interrupted 5G deal.

In doing so, the PM will need to step away from her ridiculous claim that she and her colleagues have no control over the ultimate fate of the Spark-Huawei 5G roll-out. For that proposition to be true, we would have to accept that a decision vital to this country’s economic future has been delegated to an unaccountable civil servant whose judgement will tie the hands of the democratically-elected government of New Zealand.

Fortunately, this is not the case. While the Director of the GCSB will conduct his enquiries and make his report, as legally required, the final decision must rest with the Minister in Charge of the GCSB and the SIS, Andrew Little. Which will, in turn, be guided by the deliberations of his Cabinet colleagues – as befits a parliamentary democracy.

The fiction that the Huawei decision was out of her hands was devised by the PM as a way of putting as much distance as possible between her Government and the problems that were bound to flow from such a gratuitous slap in the face of New Zealand’s largest trading partner. But now, thanks to the NCSC, we no longer have to tie ourselves up in such obviously bogus knots.

Our NCSC saviours have, however, left the PM with another question to answer: Why did the GCSB believe Huawei constituted such an existential threat to New Zealand’s national security in the first place?

The NCSC boffins have made it clear that any potential cyber-security threats can be relatively easily mitigated. The Financial Times, quotes Robert Hannigan, the former head of the UK’s Government Communications Headquarters (GCHQ), as saying that the NCSC “never found evidence of malicious Chinese state cyber activity through Huawei”. Suggestions that “any Chinese technology in any part of a 5G network represents an unacceptable risk are nonsense”, harrumphed Hannigan.

All of which suggests that the GCSB was taking its lead from other members of the Five Eyes Agreement – namely the United States, Canada and Australia. Additional domestic pressure may also have been applied by the fiercely pro-American NZ Defence Force, whose Minister, NZ First’s Ron Mark, has clearly swallowed a hefty draught of Washington’s anti-Chinese Kool Aid. Hardly surprising, really, given the vast quantities of the same beverage (notorious for inducing “Chinese threat” hallucinations) already imbibed by Mark’s boss, Foreign Minister Winston Peters.

Prime Minister Ardern needs no instruction when it comes to understanding the threat posed to the “international rules-based order” by President Donald Trump. It may, however, be time for her to reconsider her initial assessment of Canada’s Justin Trudeau. His handling of the Huawei issue has been nothing short of woeful. As for the Australians: their embarrassing lesson in the dangers of pre-emptive obsequiousness is one our PM would be wise to file away for future use.

From the very start, the co-ordinated condemnation of Huawei by the USA, Canada and Australia has been laced through with the most poisonous hypocrisy. The very notion of these Five Eyes powers identifying China’s high-tech companies as a major threat to the world’s cyber security is grotesque. No other combination of Western technological prowess has wreaked more havoc on the private communications of the worlds peoples. As Edward Snowden’s revelations made clear, the Five Eyes don’t just eavesdrop on their enemies, they listen-in on their friends as well!

We can only hope that the grown-ups at the Ministry of Foreign Affairs and Trade who have, for the past week, been working round-the-clock to haul this Government back from the brink of a catastrophic rupture with China, have also taken a moment to remind the Prime Minister that an “independent” foreign policy dictated by the Americans is almost as absurd as a foreign ministry overseen by Winston Peters.

This essay was originally published in The Otago Daily Times and The Greymouth Star of Friday, 22 February 2019.
Posted by Chris Trotter at 11:32

I'm sorry, but if I'm looking for a country that demonstrates the sort of astute political decision making that produces positive outcomes for its population at large, then the current UK government is a very long way down the list of contenders.

Indeed, the current group of clowns in charge of the UK is so inept that I would suggest that whatever political decision they make, the wise course of action is, in fact, to do the opposite.

Better still , the US might carry out it's treat to remove the UK from the five eyes network for dealing with Huawei and the whole vile setup might disintegrate.
US policy these days seems to be all about the bottom line. Huawei is a rival ahead of US tech , and furthermore its system can't be hacked by America's spy systems. That's what makes it unacceptable to US.
The rest of the world is gradually waking up to the fact that with the US as a big friend there's no need for enemies.
Jacinda was keen once for a nuclei free moment. Now is the time.
D J S

The UK (or 'Ho-ome') thinks it's OK, I'm impressed. The same reason I find it difficult to believe anyone they've done over ( and they've done over everyone). I'm a sick colonial but since the Battle of Britain they keep amassing virtue. Whilst America is all about unintentional laughs.

Somebody better get the mop and bucket out.