A Second Chance For Labour To Put Things Left. 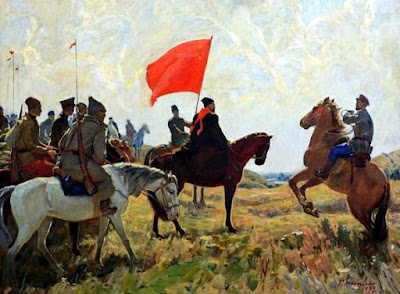 Victory Lies Ahead, Comrades! Allowing the Greens to make the case for change; assessing the force and quality of the Right’s objections; and then, following a period of extensive consultation, fashioning a suite of reforms acceptable to a solid majority of New Zealanders. Such is the royal-road to making Labour the dominant force in New Zealand politics.

IT’S NOT OFTEN in electoral politics that a party is given a second chance to get it right. In 1999, Labour and the Alliance (with the Greens more-or-less in tow) were gifted the chance to craft a political relationship that could have grown into a near-permanent lock on New Zealand’s still-new MMP electoral system. That neither partner in the Labour-Alliance coalition had the wit to seize, or even understand, the opportunity before them is a testament to the woeful immaturity of the New Zealand Left.

Perhaps the best way to describe the opportunity missed by Labour and the Alliance (and, after 2002, the Greens) is by deploying a military analogy.

Think of Labour as a large army marching through enemy territory. (The analogy works best if the army you’re imagining is a nineteenth century one – think of Napoleon’s Grande Armée, or Robert E. Lee’s Army of Northern Virginia.) The much smaller army of the Alliance is spread out well ahead of Labour’s line of march. Its role: to reconnoitre the territory into which Labour is marching; noting the disposition of the enemy’s troops; their strongpoints; and the places where their defences are weak and vulnerable to attack. Should the enemy encounter the smaller force, the resulting engagement will give the larger army plenty of time to prepare its defences.

For a while, it looked as though the Labour-Alliance combination had decided to work in precisely this fashion. The radical policies of the Alliance – especially those relating to employer-funded Paid Parental Leave and the rolling-back of the Employment Contracts Act – provoked a vehement backlash from the business community. Labour was, thereby, warned in advance of exactly where and how the enemy would attack these measures if they were adopted as official government policy.

Unfortunately, Labour failed to make good strategic use of this advance warning. When the business community’s counterattack came (in the form of the infamous “Winter of Discontent” of the year 2000) Labour fell back in confusion. The Alliance’s policies were slaughtered. Never again would the centre-left armies of Helen Clark and Jim Anderton engage the forces of the Right across such a broad front.

Indeed, in the General Election of 2002, the forces of the centre-left found themselves fighting each other. Labour and the Greens, at loggerheads over the issue of Genetic Engineering, were unwilling to march together. Abandoned by its natural ally, Helen Clark reluctantly joined forces with Peter Dunne’s United Future Party.

Reassured that there would be no more left-wing offensives, National concentrated on reinvigorating its worn-out fighting machine and prepared to take the fight to Labour. In 2005, Labour just managed to hold them at the border. But, in 2008, National brushed aside Helen’s broken army and occupied huge swathes of Labour territory.

Nine years later, under the command of its Joan-of-Arc-like leader, Jacinda Ardern, Labour is again presented with the opportunity to take the fight to the Right. Once again, they have an opportunity to send their radical allies out ahead of their main force to draw enemy fire and provide Labour with the information required to seize the strategic initiative.

If Ms Ardern and her advisers decline to accept this second chance to put things right – or, in this context, left – then they will, once again, have denied to themselves, their party, and their radical Green allies, the opportunity of making steady progressive reform New Zealand’s political default setting.

Allowing the Greens to make the case for change; assessing the force and quality of the Right’s objections; and then, following a period of extensive and authentic public consultation, fashioning a suite of reforms acceptable to a solid majority of New Zealanders. Such is the royal-road to making Labour the dominant force in New Zealand politics.

The test will be whether or not Ms Ardern is willing to follow the example of her mentor Helen Clark. In 1999, with the Greens under sustained attack from National, Ms Clark tipped the wink to Labour’s Coromandel supporters to give their electorate vote to the Green co-leader, Jeanette Fitzsimons.

If, next week, the Greens are still at risk of falling below the 5 percent MMP threshold, and Ms Ardern tips the wink to Labour’s Wellington Central voters to back James Shaw, then we can be sure that the forces of Centre-Left are, once again, on the march.

This essay was originally published in The Waikato Times, The Taranaki Daily News, The Timaru Herald, The Otago Daily Times and The Greymouth Star of Friday, 15 September 2017.
Posted by Chris Trotter at 08:35

Sorry Chris, but Labour will not give Wellington Central to the Greens.
Nor will they give anything else to the Greens.
They have stopped living in sin together.
A bitter divorce is looming.

If we are going to have war analogies then why not just slowly destroy National by infiltrating its ranks with saboteurs, poison the wells and inflict as much pain as possible so the sycophantic media can pick over the dying corpses before they are hung out on the street signs and lamp posts as warnings to anyone thinking of finding another John Key.

I think this sort of political maneouvring is what is needed Chris. If elections were just a simple matter of voting for a better plan and for change from an obvious failure most of the muttering and arguing would be unnecessary. But there are such deep ties to the National Nanny State. These from the children of the entitled who regard a withdrawal of the comforting backstop as treason, while they strut and sneer at the lower types who aren't self-made successes. Similar to Oscar Wilde about the haughty's way of cleaning up - "They enter the room and sweep it with a glance".

Can I live, cry the threatened farmers, without the sweet water in the bottle from Natnanny.
Oh TPPA, cry business, there is so much competition and we need some help from our government servants, seeing as we put Nannynat in power, they are Our servants.
The small business people who think that their best chance for a wealthy lifestyle is to stick with Nannynat, low inflation, high unemployment, over-exposure to dairy farming, tourism and spending on credit, are bitter at the idea that their aspirations could be thwarted. They would like to thwack somebody, especially if they are wearing Green or Red, they have different colour prejudices.

It isn't a pretty picture of the spirit of New Zealand (with a very small 's'). But given a chance there is a stream of very pure ambition, that is running clear and unsullied in NZ. If those Nats who still have a good enquiring mind, respect for others, a real understanding of the fickle nature of high finance, and a real affection for our country care to step up and invest their interest and vote in the left, the activists and the small business entrepreneurs waiting in the wings will soar. What a performance there will be, but we must have more brave souls who don't just continue to sit in their comfy chair watching the parade and carry on a stale critique in a pocketful of mannered mumbles.

"under the command of its Joan-of-Arc-like leader, Jacinda Ardern"

Are you suggesting she hears voices?

I hope that Jacinda Ardern practices a short period of relaxation and reflection and meditation, perhaps a little tai chi, each day in order Not to Hear so many voices. And then she can do a little reading of Bowalley Road to see coolly, what the political watchers and hopers are writing.

Sit down in your Comfy Chair Jacinda and tell those 'Inquisitors' to get lost, at least until 11am when they can bring you a cup of coffee. Take some time out from the hurly-burly and spend it with the hoi-polloi.

And have a laugh too ironically, a very important and endearing trait in good politicians, especially when they can laugh at themselves, in private though. Mustn't show weakness that can be utilised as negative propaganda.

"Jacinda doesn't take everything in this 'shower' seriously" might be the tripwire for some on the edge.
https://www.youtube.com/watch?v=XnS49c9KZw8

Polly
Stop drinking to excess and lying on the road waiting for nemesis to arrive.

You are right, the Labour-Alliance lost the opportunity to become the army of the left and near permanent government. If they lost this election it would be necessary to create a social democrat alliance and party. But being positive, the National Govt can be thrown in the wilderness for a generation and their 'alliance' unpicked (that of 1938) Liberals, Country party and the remnants of the depression era parties. Of course the right of the 'old left' is there now too.

If so, hopefully not "You Want it Darker?", let alone:"Give me back the Berlin Wall/Give me Stalin and St. Paul/I've seen the future, brother: It is murder."

Meanwhile, it somewhat beggars belief that Chris really sees our current pirouette around the political centre in these terms:

Not that I don't like Jacinda, admire her stamina or wish her well.

Victor
No it was his song entitled Joan of Arc from "songs of love and hate" I was referring to.
Cheers D J S

I remember the the Lange election well; the one when we were shafted by the neo-liberals from the inside using their cunning to bring in weasel Right Wing policies on the cloud nine of anti-nuclear policies. So much for our innocence.

I write this on the eve of HOPE. Here's for fairness, positive creativity in the education system and the end of the inequality which has been blighting so many lives. May the young, [and their ever-hopeful elders] have their chance. I cross my fingers for Saturday.