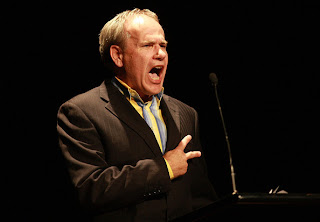 Len Brown: An ambitious, overconfident and woefully inexperienced political parvenu.
WHEN will Labour ever learn? A party whose membership now numbers less than 5,000 nationwide, and probably less than 1,000 north of Taupo, has decided – unilaterally – to select the Left’s mayoral candidate for the new Auckland "supercity".
"Cheek" is too small a word to describe this sort of behaviour. Why? Because, if we accept the well-established rule-of-thumb that only ten percent of any organisation’s paper membership should ever be considered active players, fewer than 100 people took it upon themselves to choose the person aiming to represent 1.4 million.
For the sheer, jaw-dropping arrogance of this pre-emptive strike against democratic procedure, Labour deserves a hefty political smack – to say nothing of the "good parental correction" required for putting its own, narrow, partisan interests ahead of Auckland’s future.
The creation of the new "supercity" offered the old political players of Left and Right a rare opportunity to come up with new ways of choosing their respective flag-bearers.
They could, for example, have adopted the "primary election" model operating in the United States. Surely, in the age of Facebook and Bebo, it’s not beyond the wit of Auckland’s political geeks to devise a secure system of on-line primary voting? And, for the voters who prefer to judge their political horseflesh up close, what stopped Citizens & Ratepayers and City Vision from organising a region-wide round of public meetings and straw-polls?
The answer, of course, is that there was nothing stopping either group from doing one, or even both, of these things – except the over-riding fear of having the choice of political flag-bearers taken out of their hands.
That the Right was reluctant to let its own supporters choose their candidate did not, I have to confess, surprise me. After all, the whole "supercity" plot was hatched by a cabal of right-wing Auckland businessmen intent on making the city’s "governance" much more efficient – and much less prone to interference from "interest groups" unsympathetic to market forces.
Of Labour (and City Vision, its front organisation) I did, however, expect something more imaginative (and democratic) than an old-fashioned "deal", hammered out in a variety of smoke-free rooms, between a clutch of anonymous party hacks and the Mayor of Manukau City.
Strategically commissioned opinion polls, notwithstanding, Mr Brown has long been the Auckland Right’s preferred opponent. He comes across as an evangelical social-worker, who, when he’s not mouthing bogus Pasifika street-slang, delivers earnest speeches in which the buzz-words "vision", "passion" and "community" are endlessly repeated. Up against a ruthless political veteran like John Banks, Mr Brown will be made to look exactly what he is: an ambitious, over-confident, and woefully inexperienced political parvenu.
I do, however, give Labour points for staking its claim so early and with such clarity. The other potential candidates: be he Waitakere City Mayor, Bob Harvey, or the Chairman of the Auckland Regional Council, Mike Lee; can now be intimidated into withdrawing from the race – on pain of "splitting the Left vote".
The truth, of course, is that the only splitters operating in the broader Auckland Left are Labour and its allies. By dividing the field of mayoral hopefuls into Mr Brown and "the rest", they have very foolishly, and selfishly, made the best candidate the enemy of the first.
How much better things would have looked – both ethically and strategically – had Labour held off throwing its weight behind any candidate until progressive Auckland had been given the opportunity to test all of the potential candidates in circumstances not too dissimilar from the conditions prevailing during the campaign proper.
In Mr Banks, the Right knows exactly what it’s getting: a successful business entrepreneur; a former National Party cabinet minister; and the twice-elected Mayor of Auckland City. They can be confident (because he has done it before) that Mr Banks possesses the political grit to drive through a radical right-wing agenda.
But, if the Left accepts Labour’s fait accompli, what will it be getting in Mr Brown? A Palangi lawyer from Manukau, with a very thin portfolio of municipal achievements (unlike his illustrious predecessor, Sir Barry Curtis) and a rather goofy grin.
At stake is the economic and cultural future of our largest city – a city well on its way to encompassing half New Zealand’s population.
Given the prize, I believe Auckland, and New Zealand, deserves a better choice than either Mr Banks – or Mr Brown.
Posted by Chris Trotter at 08:01

i'm sure you have heard it many times now, but why not throw your hat in the ring?

So if you, Matt McCarten, and Mike Lee have all been out-manoeuvred by a parveneu, what does that say for your political skills?

To Anonymous #1: You're too kind, but as Joe Kennedy put it: "To become President of the United States [or Mayor of the Auckland Supercity - C.T.] a candidate only needs to have three things. The first is money. The second is money. And the third is ... money."

To Anonymous #2: What on earth makes you think we've been outmanoeuvred?

You know, it's funny but I struggle to stop myself writing the name Les Brown (and his Band of Renown.) The only similarity between the two is that they both go round in never ending circles at 33 rpm. However, the older bloke had talent.

Sory Chris but you are wrong. Labour has endorsed no one. Brown has been the first out of the blocks and is obviously more organised than the others but there is no formal endorsement at this stage.

Prey tell where did you get this information? Kiwiblog?

Mickey, if you are unaware of the extraordinary effort that has been put in behind the scenes over the past 8 months in Auckland to secure for Len Brown his now widely acknowledged status of the "Left's Candidate" in the forthcoming race for the Supercity mayoralty, then you haven't being paying very close attention.

No, you're right, it's not "official", but then I'd be surprised if Labour ever officially endorses Brown as its preferred candidate (it does, after all, want him to win!).

Lack of a formal endorsement by Labour should not, however, be construed as the party adopting a neutral stance vis-a-vis the mayoral race.

The one issue that everyone seems to forget is that Len Brown recently almost died on stage due a major heart attack. The question I want answered is how can he stand the stress of the new position and the physical demands caused by that stress. The fact he is a terrible candidate and will help Banks win can be taken as read. But surely a clean bill of health would be a requirement for standing for office?

MW: Len could always get the job, have another heart attack, take loads of time off and stay on the pay role;-)

With your view, I guess you won't be standing for "stressful" positions again?

It isn't very relevant whoever the Left has as candidate (s) - what we talking about here, after all, is who will be the losing candidate.

Well Chris I am confused.

In your original post you said Labour has decided unilaterally to select the left's Mayoral candidate for the new Auckland Supercity.

In response to my post you said "[i]ts not official" and "[l]ack of a formal endorsement by Labour should not, however, be construed as the party adopting a neutral stance ..."

So Labour has not officially endorsed Len, some activists are keen supporters, but where is the proof that Labour has decided to endorse Len? I can assure you that no decision by the party has been made.

Anon beat me to it, Mr trotter, but while mickysavage argues the toss about semantics, Roy Morgan has pointed out the accuracy of your criticism. A 6% swing the wrong way is a significant achievement Mickey.

Mickey is a bit like the navy band on the deck of the US Missouri on December 7th 1941. Ignore the bombs falling and the torpedoes already in the water. Just make sure the anthem is played right through to its conclusion.