Politics Without Idealism: Paulo Zerbato's grim painting offers an acerbic commentary on the notion that political action can somehow be divorced from the ideals ("uncompromising dogma") which inspired it. In the face of inescapable moral challenges, it is "business as usual" (or as close to "usual" as you can make it) that paves the road to perdition.

“WE CAN’T AFFORD the luxury of uncompromising dogma.” The Green Party should write that down. It’s a direct quote from Labour’s deputy-leader and environment spokesperson, Grant Robertson.

He was speaking alongside (and keeping an eye on, a cynic might suggest) David Cunliffe at a “Labour and the Environment” forum held at the Titirangi Public Library on Saturday, 23 June. I took down Mr Robertson’s words because they were so obviously intended to alert all left-leaning political activists (including Mr Cunliffe) that Labour will be offering no hostages to fortune when it comes to formulating environmental policies for the 2014 election.

It’s worth spending a little time unpicking Mr Robertson’s statement. Obviously, his “uncompromising dogma” barb was directed at the environmental policies of other parties – but which ones?

Was he alluding to the National Party? Certainly, Mr Key’s government has a reputation for dogmatism when it comes to deep-sea drilling, the evils of trade unionism and the virtues of educational standards, but “uncompromising”? Mr Key’s many critics on the Right would strongly disagree. Indeed, it is precisely Mr Key’s willingness to back-track and compromise that so infuriates his detractors.

No, I do not think Mr Robertson’s rhetorical harpoon was intended for the National Party. His target wasn’t a blue whale, it was green.

Labour’s attitude to the Greens gyrates wildly between aggrieved toleration and rank hostility. Fundamentally, they regard the Greens as poachers: impudent trespassers on the Left’s ancestral lands and wilful perpetrators of electoral larceny. It’s what the hapless Clare Curran, Labour MP for Dunedin South, meant when she blogged, in August of 2011, about “attempts by the Greens to encroach on Labour territory”.

Labour looks at the polls: sees its own numbers rising; National’s falling; and the Greens’ tracking up. Clearly, some of National’s soft right-wing vote is drifting back to Labour, but, equally clearly, Labour’s left-wing support is shifting to the Greens. The policy implications of this right-wingers-in-the-front-door, left-wingers-out-the-back, political movement presents the Labour leadership with all kinds of headaches.

Reading the full text of his speech to the Titirangi meeting, it is clear that rather than see Labour go fly-fishing in the rivers of the Right, Mr Cunliffe would prefer the party to lower a net into the ocean of the 800,000 electors who declined to participate in the 2011 General Election.

In his speech, TheDolphin and the Dole Queue, Mr Cunliffe declares:

Getting the best long term outcomes will not always mean maximising short term profits. It can’t. Anyone who tells you it can is either stupid or lying … Do people … understand the costs of not adjusting and not planning for a better future? Do they understand that business as usual simply cannot continue?

The strategic thinking here is bold: align Labour’s policies closely with the Greens’ and let the two parties go fishing together for the disillusioned, the disengaged and, most especially, for the young. 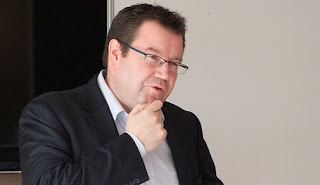 Unfortunately, Mr Robertson’s more cautious political instincts adjudge this sort of thinking to be not bold but reckless. Mr Cunliffe’s recitation of the well-documented global hazards threatening the human species’ long-term survival, and his radical conclusion that “business as usual simply cannot continue”, all of it rings in Mr Robertson’s ears as “uncompromising dogma”. Such policies are all very well for minor parties like the Greens, but they simply will not do for parties that aspire to the status of New Zealand’s “alternative government”.

Such parties “cannot afford the luxury” of a radicalism that just might energise this country’s increasingly inert electorate. An alternative government committed to the notion that “business as usual simply cannot continue” would instantly attract the enmity of every entrenched industrial, commercial and financial interest in the land. It’s leaders would be pilloried, denounced, demonised. And, honestly, Mr Robertson has never struck me as a politician who would, voluntarily, risk any of those experiences.

That’s the message he’s conveying to his rival for the Labour leadership and, more importantly, it’s what he’s saying to the Greens’ co-leaders, Russel Norman and Metiria Turei. It’s a simple, and very brutal warning:

There’s a cabinet seat for you in the next Labour-led government, but only if you’re willing to leave your radical ideals [“uncompromising dogma”] at the door. Only if you accept that it will be ‘business’ as close to ‘usual’ as Labour can make it.

This essay was originally published by The Otago Daily Times, The Waikato Times, The Taranaki Daily News, The Timaru Herald and The Greymouth Star of Friday, 13 July 2012.
Posted by Chris Trotter at 11:45

Having read Robertson's reply to your comments, on Red Jerk, it is obvious that today's Labour are running scared of the Greens, and not National.
He lacks substance - just rhetoric and indecision - like his current leader - nothing definitive - could be black, or could be white.
And no real different policy from National - no boldness.

Who is jerking whom, Paulus? At least link the response' http://blog.labour.org.nz/2012/07/13/for-the-benefit-of-mr-trotter/

Thanks, Tim G. You've saved me the trouble. My response to Grant is there too.

I am not sure whether any of it is particularly significant at this stage - it could well be just people finding their preferred political home as Labour and the Greens move to the right.

Both Labour and the Greens are social democrat parties, so of course they are in a competion for the same pool of voters, and of course they will increasingly fight over the 'middle ground'.

We all know when this happens the 'middle' moves to the right.

What world do you live in Chris? Seems to be one of posture and ponder divorced from any NZ reality that I know.

Since when has dogma NOT been uncompromising?

Since when has dogma been a luxury?
(Self indulgent? Yes.)

Where is it bought?
(OK. I know, if I have to ask I cannot afford it.)

Robertson is an illiterate fuckwit desperately trying to sound like Tony Blair.

Where were the LP voters at the last election? At home.

Where were the NP voters at the last election? Voting.

More Blairite crapola from the LP will ensure that LP voters will still stay at home come the next election.

There are very large number of voters who do not like what this govt is, and has been doing, why would they vot for anyone else?

Grant wants to be seen as a moderate and sensible chap because this third way schtick is lore for the "top team" and, given the influence the "top team" (and Trevor in particular) wields in determining the worldview of the caucus, the "top team" view is the caucus view.

Right now, then, the important thing for Grant is to be seen a steady hand who will be a risk free successor to Shearer.

What you need to understand is that the caucus majority is locked into a narrative of steady as she goes because they believe that all they need to do to get the government benches in 2014 is let National continue to lose votes and not scare the horses.

In their minds they've already won and they've just got to keep their heads down.

I think Cunliffe understands how misguided this is but it does him no good. He's a Cassandra.

As much as you get it right, Chris, you've made the mistake of assuming Grant is playing to any other audience than this caucus bubble. And why should he? It's the caucus that will vote him in when Shearer fails. Not the members, not the affiliates, and not the lefty pundits.

The left are always like this-wanting to be further left than the next person and purer as well. Always good for a laugh.
Personally I would love to see Grant Robertson head the Labour Party-it would be guarantee that they would stay in opposition. He is so lightweight as to defy gravity!

Someone earlier in this thread described Labour and the Greens as social democratic parties.

The Greens could be a social democratic party but the economic policy has been so vague and - at best - incomplete for so long that it is hard to tell what the philosophy might actually be. And with so many green capitalists moving through the party ranks now, the Greens' race to the right seems to have circumvented social democracy altogether.

There are so many reasons why it is once again time for truly social democratic movement. Maybe this is what Cunliffe is trying to say. I'm not advocating a return to the 1970s - it would have to be SocDem 2.0, recovering the best of the social democratic vision for present times.

A moderately left wing social democratic party would scoop the pool in NZ. Meanwhile the electorate sits and waits ...