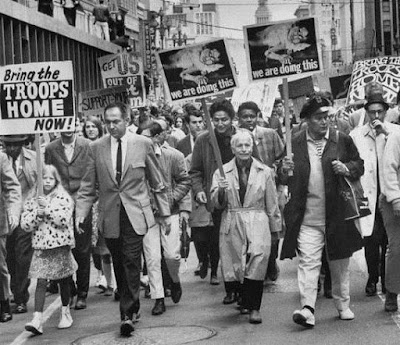 Climate Changers: Ordinary New Zealanders make a very direct and public contribution to the evolution of their country's foreign policy vis-à-vis Vietnam in 1967. The effort to move New Zealand out from under America's shadow has been a constant theme of the post-war foreign policy debate. Since its first gathering in 1966, the University of Otago's Foreign Policy School has played a significant role in modifying the "official climate of opinion" in relation to the USA.
GERALD HENSLEY sums up the congealed orthodoxy of New Zealand’s foreign policy establishment in his 2006 memoir – Final Approaches. In 1989, the veteran New Zealand diplomat and civil servant was awarded a fellowship to Harvard by the Centre for International Affairs. Describing with obvious relish the cosy ivy-league environment of languorous breakfasts and roaring log fires, he rounded-off his observations of the winter the Wall came down by musing upon the performance of a group of classical musicians.
“A few nights later I looked down at the Beaux Arts Trio taking their bows after a concert and was struck by the tradition they represented – three dumpy figures with the light gleaming on their white hair and shirt-fronts who had helped carry the values of civilisation through the long totalitarian shadow cast by the twentieth century.”
Let us put to one side the obvious retorts that the Nazis are known to have organised classical recitals in the death camps; and that the Soviets’ reverence for the classical tradition was second to none; and examine instead Mr Hensley’s comfortable assumptions about the character of the Cold War’s ultimate victors.
The battle, according to Hensley, has always been a struggle between the “values of civilisation” and the “totalitarian shadow”. In framing his own, and, by extension, New Zealand’s, diplomatic choices in these stark Manichean terms, Hensley echoes the conceptual conservatism that has dictated the formulation and conduct of New Zealand foreign policy for the last 70 years.
Where, one wonders, were the “values of civilisation” when the United States Air Force was spraying Agent Orange on Vietnam’s forests? (Not to mention its own – and our – troops!) And where, exactly, did the “totalitarian shadow” fall when America’s murderous Honduran proxies (all of them thoroughly trained at the infamous US Army School of the Americas in Georgia) were waging genocidal war against their own indigenous Mayan population? And what about all those Washington neo-cons and their plans for bringing the “values of civilisation” to Afghanistan and Iraq? How’s that working out?
It’s not simply that New Zealand’s foreign policy establishment routinely dismiss such questions as evidence of either naivety or (much worse!) anti-Americanism, but that in soaking-up the cosy collegial atmosphere depicted in Hensley’s memoirs, New Zealand diplomats very rapidly lose all interest in undertaking any such ethical interrogation of their very, very, very good friends.
Writing 40 years prior to the appearance of Hensley’s Final Approaches, William B. Sutch, in his The Quest For Security in New Zealand 1840-1966, recalled the birth of the Cold War in the late 1940s, when the Labour Party, under Peter Fraser, inaugurated “a period, which has now lasted two decades, when not only was dissent from the customary social and economic way of doing things regarded with suspicion, and sceptical thinking discouraged, but an official climate of opinion developed, conditioned to receive US foreign policy sympathetically just as in past years the support for British foreign policy had been almost automatic.”
Academic institutions have played a crucial role in the formulation and maintenance of that “official climate of opinion”. All across the English-speaking world, ‘Centres’ for this and ‘Institutes’ for that make sure that, in addition to churning-out copious quantities of self-serving “research”, they regularly perform the much more important function of bringing together the men and women upon whose shoulders the responsibility for ensuring that the official climate does not change ultimately rests. At such gatherings the official orthodoxy is reinforced, international relationships forged, and new talent spotted and recruited.
The University of Otago Foreign Policy School, which celebrated its fiftieth anniversary in Dunedin over the weekend, was New Zealand’s first attempt at creating an academic adjunct to the official formulators of this country’s foreign policy. Inspired by Arnold Entwisle, and run by him for the first ten years of its existence, the two-day “school” initially did little more than provide an introduction to the rudiments of foreign policy and alert Otago’s brightest graduates to the possibility of a career at the Ministry of Foreign Affairs.
As the year’s passed, however, the School’s annual colloquium began to build up a distinct community of participants and attendees. Not only the Ministry but many of the larger embassies regularly sent observers. Prestigious speakers, both local and international, added to the School’s reputation.
Much more significant, however, was the way the School adapted its subject-matter to reflect the public’s increasing engagement in foreign policy issues – especially the Vietnam War, sporting contacts with Apartheid-era South Africa, and nuclear disarmament. In doing so the School distinguished itself clearly from its local and overseas counterparts. By no means always, but often enough to perturb the official climate of opinion, the University of Otago Foreign Policy School has been prepared to interrogate, and not always sympathetically, the “values of civilisation” – and American foreign policy.
This essay was originally published in The Press of Tuesday, 30 June 2015.
Posted by Chris Trotter at 13:53

And what now, I wondwe?

It always seems to me that Foreign Affairs or MFAT has a rather simple and not very brave view of NZ and its economy. In the 1960s and 1970s there was a desperation to maintain maximum access to the British and European market, as any too rapid change away from our agricultural and then British connection, seemed to be perceived as too challenging for the NZ population and its political stability. Many British conservative MPs actually thought NZ was being far too indulged for its own good. Even today the aim of MFAT and Tim Grosser seems to maximise bulk milk and milkpowder sails to large markets such as China and India and in past it was percieved Russia would be the third destination for milk sales. Simple bulk sales and the easiest transactions seemed the aim.
Although much is made of tourism receipts, New Zealand's tourist development since the 1960s has been woefully limited and always based on the fear that anything too exciting or challenging in entertainments and workforce requirements was far too challenging for the natives. In the 1960s a national system or modern rail and DMU railcars running into the key tourist areas Northland, Rotorua, Gisborne, West Coast etc would of been of minimal cost, say $10 million for rail equipment and $5 million annual subsidy- but was rejected on the basis of the general prejudice of the population and Labour politicians that rail was low class, uncomfortable and various prejudices of the supposed limitations of the gauge. Even now the rail system remains largely intact and it is scandlous that there is not a passenger rail service daily to Kerikeri/ Opua, Rotorua, Tauranga, New Plymouth and a couple of times a day to Napier, Greymouth, PIcton and Dunedin.The real extra costs would be minimal to provide the essentials of a civilised country.
In terms of defence I have never seen any evidence that such Diplomatic alumini like Frank Corner had much understanding of how New Zealand actually fitted into the world view of the UK and USA. Defence purchases and equipment since 1966 has been seen largely or partially related to trade relations and the idea that New Zealand actually made any serious or real contribution other than diplomatic or political seems to end about the end of the confrontation with Indonesia in 1966 and Vietnam turning sour in 1967-68. The nuclear issue in 1984-86 revealed Foreign Affairs ignorant of such basic facts that all frigates and destroyers in the RN and USN constituted an indivisible second line of nuclear deterrence, and that tactical nuclear weapons remained critical at that time for deterrence and effective anti submarine capability particulary for the RN. The possiblities for negotiation rested on the fact that there was no need for New Zealand to accept visits from nuclear attack fleet submarines, aircraft carriers or battleships- but any attempt to restrict general access for destroyers and frigates was unworkable. In law one of the first thing looked at, is the title of the legislation. The USS Buchanan was a GMD Guided Missile destroyer, a higher category of ship than 4/5 of the USN visitors of previous 83/4 year that were frigates, guided missile frigates or FFG-7s.
The bumbling handling of the issue was elementary and probably anticipated, and markedly lacking in courage as MFAT in truth were entirely lacking in wholehearted support for either nuclear free, nuclear deterrence or realpolitik.
Today New Zealand continues to grandstand on insolvable issues, like the Middle East and Climate change while completely failing to developing our cities as world class playgrounds for the world and continues an obsessional reliance on dairying against environmental and diversified trade interests. Conversions should have been stopped years ago along with the quest for fullfilling bulk milk markets. Lamb access to markets should be an equal priority as much more consistent with NZ environs and future markets.

I know it only tangentially touches the subject (no it doesn't) but isn't it true, we punch above our weight sometimes.
As did a team of mostly 'unknowns' to be the best in the world today I reckon. They would give the ABs a close shave.
Politically does this parallel? Yes of course. Labour can do a Highlanders if it gets a team together that has the strength and passion to line up the country behind them. It's part pack animal and part good tactics (policy too of course) and for a while your opponents have done it very well. The tide will turn. I may be a Tory but first I am a democrat and NZer first. One team winning all the time, like my Crusaders is great for me, but not for the game or country.