Not Understood: Why New Zealand’s Current-Affairs Television Is So Bad. 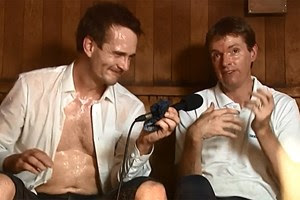 Absurdist Performance Art: The television reviewer, Diana Wichtel, attempting to make sense of the "surely ironically titled" Newsworthy, found only absurdity in the spectacle of the show's co-host, David Farrier, slowly stripping in front of Conservative Party leader, Colin Craig, in a sauna. It's not that New Zealand can't produce top-quality news and current affairs, it's more a matter of a growing number of viewers preferring that it didn't.
It is difficult to get a man to understand something, when his salary depends upon his not understanding it! – Upton Sinclair (1878–1968)  Muckraking American journalist and author.
TELEVISION CRITIC, Diana Wichtel, advises her readers to look upon the latest free-to-air current affairs offerings as “a sort of absurdist performance art”. It’s an arresting notion: the idea that television journalists, in attempting to make sense of contemporary New Zealand, can produce only nonsense. Either, the current affairs programmes on free-to-air television are accurate journalistic depictions of an increasingly absurd society, or, depicting New Zealand society accurately has become too troublesome for mainstream TV journalism.
This is a grim pair of options. They raise the question of whether or not the demise of serious current affairs journalism is peculiar to New Zealand television, or, whether it ours is merely the local reflection of a worldwide decline in the genre?
Sadly, the answer is that the decline is a peculiarly New Zealand phenomenon.
Just last week, an hour-long episode of the BBC documentary series, Panorama, exposed the most shocking misdeeds of the Royal Ulster Constabulary’s Special Branch, MI5 and the UK Defence Force. Laid bare was the protection afforded to murderers and terrorists by agents of the British state. It was television journalism at its best: fearless, thorough and absolutely gripping. The powerful were held to account; the voices of the powerless rang out loud and clear; and the interests of democratic accountability were well and truly served.
Genuine television current-affairs journalism is, quite clearly, still possible in other parts of the world – so why not here? Has our society truly reached a level of absurdity such that it makes more sense to turn out a product in which the “surely ironically titled” Newsworthy show’s co-host, David Farrier, “slowly stripped in front of [Conservative Party leader] Colin Craig in a sauna.” The answer, I’m afraid, is: “Yes, that is the level of absurdity that we have reached.”
Thirty years of neoliberal extremism has produced a society in which, for nearly half the population, life has become a bitter struggle for survival. What’s more, the reality of that struggle is becoming increasingly difficult to ignore. Tragedies, like the little girl who died of an illness that was complicated and intensified by the shocking quality of her family’s state-provided accommodation, cry out for action – but no serious governmental response is forthcoming.
It is the function of the news media in a properly functioning democracy to rouse public opinion against such political and bureaucratic delinquency. An aggrieved public, it is assumed, being all that is required to secure a redress of wrongs. This is what the BBC’s Panorama programme sets out to do, and it is what the now discontinued Campbell Live show more often than not achieved. (What John Campbell and his team would have made of the little girl’s tragic death is easily imagined!)
And yet, even when it was still being broadcast, Campbell Live always came across as representing the exception, rather than the rule, when it came to free-to-air current affairs in prime time. Indeed, I strongly suspect that every time the show’s producers and journalists broadcast another item critical of the status quo, they were all acutely aware of the massive viewer resistance through which it had to pass. They knew that out there – even among the show’s habitual viewers – there was a vast number of people who simply did not want to know.
Who are these people? They are the New Zealanders for whom neoliberalism is working. The citizens who own their own home, who are holding down a well-paying job, whose children attend a high-decile school, and who would rather not have their noses rubbed in the grim realities experienced by those who have none of these things.
Programmes like Newsworthy and Seven Sharp are what results when the network bosses decide that it is both more profitable and less troublesome to produce programmes for the men and women whose salaries depend on not understanding too much about the sort of society that makes them rich and others poor.
In a land of plenty – like New Zealand – such a situation is not only very wrong, it is also utterly absurd. But, when exposing the former is considered too troublesome, then “a sort of absurdist performance art” is all that remains.
This essay was originally posted on The Daily Blog of Saturday, 12 June 2015.
Posted by Chris Trotter at 12:29

Those making it aren't making it because of neo-liberalism, but despite it. It has to go, one way or another. Probably not before I depart this earth, but it has to go!

I think it's likely that "the poor" also choose not to see or be advised, for many obvious reasons.

I'm not sure there's a great deal of brilliant journalism in the US, but there is some – but what do the lower class white people watch? Faux news. And therefore vote against their own interests, because they think Obama is Kenyan or something. Providing people with good quality news doesn't necessarily mean they'll watch it unfortunately.

You have made an assertion that "Thirty years of neo-liberal extremism has produced a society in which, for nearly half the population, life has become a bitter struggle for survival."

I can only assume that when you make such a statement you pay virtually no regard to statistics.

For instance in 2014 the average weekly wage and salary was around $55,000. Household income was higher at $90,000. The average and the median are virtually the same. Wage increases were around 2.5%. Inflation was 0.8% for 2014. Interest rates were, and are continuing to fall.

In short people have actually had an increase in real incomes for about 3 years in a row. Even the minimum wage has increased faster than inflation. And there is a huge amount of evidence that National Superannuitants are doing relatively well - they mostly own their own home.

Now I am not suggesting it is easy for everyone. But for the majority of the population, probably around 70 to 80%, they have become better off over the last thirty years. For the last 3 years, once the GFC was got through, the facts are incontrovertible. For virtually everyone in employment they are better off than 3 years ago.

Where I would agree is that beneficiaries and unemployed have had a struggle (and also those on law wages). Since 1984 unemployment is on average higher than prior to 1984, when it was around 1%. Benefits have only increased by inflation since 1992. However beneficiaries, unemployed and low income families (excluding superannuatants) are not nearly half the population. A lot of low income earners are young people in their first or second job. Many will earn more than the average income at their peak earning years.

Obviously buying a house in Auckland is not easy. The price multiple is higher now than it used to be, but then interest rates are now at an historic low. It always has taken at least two years solid saving for a young couple to get the deposit to buy their first home. However, we no longer have capitalization of family benefit for a deposit, and that was hugely important for young couples with children and on one income. Perhaps the biggest gap that now exists is for young families on modest incomes trying to get their first home, especially in Auckland.

In the 1970's places like Manurewa were full of such families. Today such people would really struggle to put the necessary $40,000 to $50,000 deposit together. Ironically they could afford the mortgage at current rates. On a $400,000 mortgage, the weekly payment would be around $500 per week. Low income families are eligible for Accommodation Supplement for mortgage payments. But a family on say $40,000 to $50,000 salary supplemented with Family Tax Credit and Accommodation Supplement would not be able to put the deposit together.

But they probably could afford a house in Rotorua, or any number of provincial towns and cities.

There is a pollyannerish self censorship that goes with the current status quo. Any critique is seen as cynicism. People are afraid of losing what they have and not progressing on to the Elysian Fields of capitalism.

Yes Chris, as well as what Wayne Mapp says about you paying virtually no regard to statistics, you ignore the market evidence.

The Lamborghinis in the ad in Saturday's Herald is the sort stuff you should note. A third of them have sold so that shows how well off we are. There will be all sorts of ruckus as thousands fight to buy the top priced one and I can't believe they are prepared to let it go so cheaply given the demand. It's a snip at $736,000 and even though we're all raking raking it in and can afford such trinkets having moved out to the provinces, such beasts should not have to suffer commuter traffic snarl-ups.

Upton Sinclair a 'muckraker'?; The Jungle exposed the disgrace of the meatpacking industry at the time. Sinclair was undercover; only way he could gather the evidence.

If Wayne you be..

Average and median wage definitely not the same so your habit of playing fast and loose with the truth continues unabated.