Praise Be For Pope Francis! 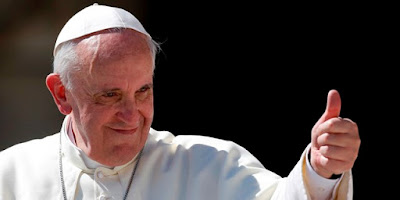 Praise Be: Pope Francis, in his first encyclical “Laudato Si” (Praise Be) presents global capitalism with a stark choice. Either, brand this fearless pope a heretic and destroy him; or, embrace his radical Christian ecologism as a uniquely effective way of re-presenting capitalism to an increasingly hostile world.
POPE FRANCIS, like his namesake, Saint Francis of Assisi, is challenging the powerful to see the world through new eyes. The question, now, is whether the powerful will embrace this radical pope, or destroy him?
The fate of St. Francis would have been grim, had the then occupant of the papal throne, Innocent III, not recognised in his charismatic power a force of huge potential benefit to the Catholic Church. By extending his protection to Francis and his followers, Innocent allowed them to open a new pathway for the faithful. Pope Francis, in his first encyclical “Laudato Si” (Praise Be) presents global capitalism with a similar choice. Either, brand this radical pope a heretic and destroy him; or, embrace his radical Christian ecologism as a uniquely effective way of re-presenting capitalism to an increasingly hostile world.
Laudato Si is not only a masterful presentation of the case for the reality of global warming, but also a fearless exposé of its all-too-human origins. In linking environmental crisis with the mindset that places profit and private property ahead of all other considerations, Pope Francis is openly conceding what those on the right of politics have long suspected: that their opponents see climate change and capitalism as inextricably linked; and that the effects of the former cannot be effectively moderated without radically constraining the appetites of the latter.
It is this suspicion, now confirmed by Laudato Si, that explains the Right’s heavy intellectual (and financial) investment in the promotion of climate change denial. In essence, the climate change deniers want the world to believe two things: 1) That the “science” of climate change is highly contestable and very far from being settled. 2) That unscrupulous left-wing parties and politicians (especially the Greens) are using the alleged “threat” of climate change as a Trojan horse to bring down free-market capitalism.
In the context of normal electoral competition in the West, the general thrust of climate change denial has proved to be remarkably effective. Most voters understand that if climate change is real, then business-as-usual is over, and some pretty radical adjustments to their lifestyle must be imminent. But, if sufficient doubt can be raised concerning the urgency, the severity – or even the reality – of climate change, then business-as-usual will be able to go on for a little bit longer. And if the electorate’s ingrained historical fear of the Left could somehow be bundled-up with climate change? Well, then the life of business-as-usual could be extended almost indefinitely.
What makes Laudato Si so important is that its confirmation of the reality of climate change, and its indictment of capitalism as both creator and perpetuator of global warming, comes from a realm above and beyond the accepted parameters of electoral politics. Francis I is the spiritual leader of the world’s 1.2 billion Roman Catholics – people who believe sincerely and devoutly that their Holy Father in Rome speaks for God himself. And if God’s anointed should speak with a left-wing accent?
The forces of conservative Catholicism have lived in mortal fear of just such a pope ever since the sweeping “Vatican II” reforms of Pope John XXIII. There are even those who, like the British author, David Yallop, believe that the last pope to advance the beneficial option for the poor, Pope John Paul I, was murdered by conservative ecclesiastical forces in the grip of the Italian Far-Right. Certainly, John Paul I’s successor, the virulently anti-Communist Pole, Karol Wojtyla (Pope St. John Paul II) put paid to the hopes of liberal reformers and liberation theologians all over the Catholic world – most notably in Francis’s home continent, South America.
Reaction and corruption are still deeply embedded in the Catholic Church, and their minions have already been given every cause to fear the reforming hand of Pope Francis. That they should reach out to their natural allies – the neoliberal defenders of a globalised capitalism red in tooth and claw – is only to be expected.
The American Far-Right, in particular, will be aghast at the contents of Laudato Si. In the electorally critical sun-belt, the votes of overwhelmingly Catholic Hispanic Americans could make all the difference to next year’s presidential election.
There can be no disputing that Pope Francis has taken a great risk in delivering Laudato Si. Equally indisputable, however, is the greatness of his purpose. In his own words:
“We must regain the conviction that we need one another, that we have a shared responsibility for others and the world, and that being good and decent are worth it. We have had enough of immorality and the mockery of ethics, goodness, faith and honesty. It is time to acknowledge that light-hearted superficiality has done us no good.”
Pope Francis has invited us to take ourselves and our planet seriously. It’s almost certainly the last chance we’ll be given.
This essay was originally published in The Press of Tuesday, 23 June 2015.
Posted by Chris Trotter at 12:35

This Pope is only a good Pope in comparison to the last one, who was an ex fascist. I think Tom Scott put it quite well in his cartoon. Something like "the world is a pigsty but keep breeding." We should give credit where credit is due, but the man is not perfect :-).

That they should reach out to their natural allies – the neoliberal defenders of a globalised capitalism red in tooth and claw – is only to be expected.

In much the same way that those who believe in the "settled science" of climate change are now relying on someone who hears voices, who purports to be the sole interpreter of the voice in the sky, to provide moral backing.

The reality is that Laudato Siso condemns the existing poor on this planet to a life without cheap energy, to a continuation of the practices of the catholic church (and to be fair, most other religions) where the better life awaits you beyond the grave so long as you give up on having choice in this life.

Of course, the electorate’s ingrained historical fear of the Left is well founded. The capitalist system, the free-market system (not some bastardised Ayn Rand or cronyism model), has bought more wealth to the world than anything else. Once upon a time inequality was about people living in a state of permanent malnourishment. Now we associate poverty with obesity and eating too much junk food. Maybe it's just that insistence on telling what to do, that nanny knows best... I've lost the link, but something I saw the other day caught my eye:
The Royal Society's motto is nullius in verba. Now it puts out catechisms of what you must believe in..

As for the settled science, it's easy to make any hypothesis fit when you secretly change the data to suit.

Oh dear, now you think the Pope is a left wing hero in the making who bad capitalists will kill? That's your innuendo.
What a desperate argument it has come to now on the left.
The crimes against humanity that his church is guilty of have no resonance with you? Over-population just one of the big ones: 'Go forth and multiply and subdue the earth' about sums up why large areas of it are environmental waste lands and you think the Pope has the answer? How about women priests and contraception as against his easy platitudes and sound bites about bad commercialism. Now that would impress.
He's just another populist politician selling his brand of poison to the masses. And masses and masses they are. 1.2 billion of them.
The Vatican has billions of Euros and guess where it is invested: in capitalist businesses.
It's not capitalism that is red in tooth and claw, it is nature and we're all part of that: Communists, socialists, capitalists, catholics, muslims and all of us. So how specious & biased to lay the blame at the door of one of these.

I think the Pope is possibly been influenced by liberation theology, which as I remember it originated in South America? I think he has a genuine concern for the poor, certainly more than most of his predecessors, and certainly more than most of the 1%. He certainly seems to have annoyed Fox news, which gets him credits in my book. I think it's wrong to blame them for where the church invests its money, as I doubt if he had a lot to do with that. But he's trapped in the birth-control thing. Which doesn't have particularly long history it seems to me, but the Pope has been infallible since 1870 :-).

I hope most of the readers of this blog will forgive my pointing out the very obvious to Charles E. 'Nature red in tooth and claw' was a reference to a vague impression of a much larger - and simpler - scale than one species' survival. Within the species, any competition will be on rules. Humans are perhaps uniquely privileged in that they can decide the rules, whether 'Communists, socialists...and all the rest of us'.

Since it's even more obvious that climate change proceeds from pretty basic physics, I better not waste anyone's time on that.

"but the Pope has been infallible since 1870"

I suspect that in 1870 the church was clarifying what had been previously been taken for granted.

Perhaps anonymous, but if I remember my church history – God so long ago – most scholars agree it's not possible to fix the doctrine very exactly in time. And while it was taken for granted perhaps by many, there was some schism.

Just another populist politician....the church is often accused of bigotry etc. So if you or I delivered the same message Francis has it would be valid but because he has its not?
Shooting the messenger seems to be in vogue.