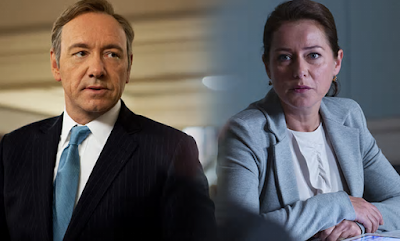 American Cynicism vs Danish Idealism: That the ruthless and corrupt hero of House of Cards, Francis Underwood, so completely captivated American television viewers should, perhaps, have alerted us to the possibility of Donald Trump in the White House. The tremendous popularity of the Danish TV series Borgen and its heroine, Birgitte Nyborg, testifies to the worldwide hunger for a more principled kind of politics.
ALONG WITH LEGO, and those foiled-wrapped segments of creamily delicious cheese, Borgen, is one of Denmark’s most successful exports. When the idea of a series about the intricacies of Danish politics was pitched to the bosses at the publicly owned Danish Broadcasting Corporation more than a few eyebrows must have shot up. But, somehow, the show’s creator, Adam Price (one of Denmark’s leading television chefs!) convinced them to back the project – and Borgen went on to wow the world.
What made the series so compelling (apart from Price’s intelligent script and Sidse Babett Knudsen’s insightful rendering of Birgitte Nyborg, the drama’s central character ) was the way party politics was presented to the show’s well-off and well-educated audiences.
Unlike the blackly comical British series, The Thick Of It, which delighted in portraying the political process and its practitioners as irredeemably corrupt and ineffective, Borgen took as its starting point the historically undeniable ability of the democratic process to improve the lives of ordinary human-beings.
It’s an important difference. The Thick of It may be funny, but it is also profoundly disempowering. Nothing good can come from the politics represented in TTOI because none of its characters are in the least bit inspiring. The viewers may laugh at the hugely inventive invective which pours out of the mouth of its anti-hero, Malcolm Tucker, but very few of them would want to inhabit his world.
Borgen does not pretend that the political world is without self-aggrandisement and venality. Or that deception, compromise and betrayal are not inescapable aspects of the exercise of political power. But the series refuses to make these the be-all and end-all of the process. In the character of Birgitte Nyborg, Price offers his audience a politician who, through all the vicissitudes of high public office, remains unswervingly committed to the bright bundle of ideals that impelled her into politics.
Borgen is empowering precisely because it refuses to validate the cynicism and disillusionment which pervades so many ordinary citizens’ perception of contemporary politics. What makes the series work dramatically, however, is the way Price plays to his audiences’ deep-seated yearning for a politician who refuses to play it safe. A person with enough faith in the intelligence of the voting public to tell them the truth, and enough trust in the essential goodness of human-beings to address her policies to what Abraham Lincoln called “the better angels of our nature”.
This is the style of politics that Birgitte Nyborg practices – and Borgen’s audiences love it.
Danish Broadcasting is to be commended for Borgen. Not only because it reveals Denmark, a country about the same size as New Zealand, to be deeply committed to the idea that its public broadcaster has a vital role in both explaining and upholding its democratic institutions, but also because it is willing to invest in the creative capacities of its own citizens – to the point of funding a project of Borgen’s scope and scale. Would that New Zealanders were as committed to preserving the public service aspects of their broadcasting system!
Because there is a price to be paid for dwelling only on the negative aspects of politics. If voters are encouraged to believe that their political system is “rigged”, and that their political leaders are “crooked”, then they will cease to have faith in the intricate networks of alliances; the complex arrangements of compromises; and the step-by-step fulfilment of promises that is the daily grind of democratic politics.
And when that happens: when the voters dismiss the give-and-take of parliamentary politics; the sort of politics that President Lyndon Johnson personified, and which produced the transformational Voting Rights Act of 1965; then they begin to long for a leader strong enough to dispense with the formalities of politics and cut to the chase.
Except that a leader who’s contemptuous of complexity and compromise must also be contemptuous of the voters themselves. Because the inescapable fact of human existence is that it is not simple, and that the competing needs of human society are only resolvable by people who are willing to compromise.
Compromising does not mean capitulating. This is Borgen’s core message. That compromising is about keeping your own ideals alive by recognising the ideals of others: the rights of others.
Rejecting the politics of Birgitte Nyborg, leaves only the anti-politics of Donald Trump.
This essay was originally published in The Waikato Times, The Taranaki Daily News, The Timaru Herald, The Otago Daily Times and The Greymouth Star of Friday, 28 October 2016.
Posted by Chris Trotter at 08:01

A person with enough faith in the intelligence of the voting public to tell them the truth, and enough trust in the essential goodness of human-beings to address her policies to what Abraham Lincoln called “the better angels of our nature”.

Has there been a pol. in NZ like this in recent memory? Maybe I'm cynical but they seem detached these days. I was taught by Johnathon Hunt, around the time he was selected for New Lynn. I think he started out wanting to 'do good' but later? He became 'Minister of wine and cheese'obsessing about his entitlements. Maybe there should be a limit on how long you can serve. Maybe National MPs start off cynical :). They certainly don't govern for anyone but their own IMO.

Chris this might be a sidetrack but I also wrote an article where I refer to the the politics of Donald Trump. My article is titled Housing Affordability: Reform or Revolution? Trump would be a type of revolution.

You can read it here. https://medium.com/@brendon_harre/housing-affordability-reform-or-revolution-ad3ac2d896c6#.h9jr6z5s8

I accept the basic premise that "comprising does not mean capitulating" that is proved in the Stalin/ Hitler agreement, Chamberlain/Hitler peace agreement, Maori/ British Watangi agreement and a host of other "agreements" in world affairs.
Compromise is always sought by the weaker partner in conflict, the stronger partner should always be at buyer beware status.

Trump may well seek compromise to business activities for peaceful transfer of power.

A very clever series - worth a watch.
Available at most Public Libraries as I understand.

Smile,America,your capitalist values are on show.I will use a animal terminology for their breed.Donald, a capitalist dog.Hillary,a capitalist bitch.
And the caring pensioner,unlike those capitalist dogs, America,seems to be leaving in the uncaring pound.