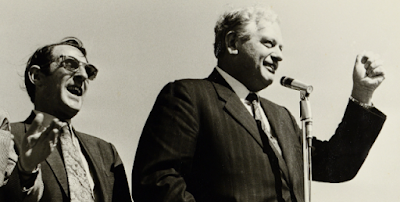 Thought provoking, but power has to be gained first to achieve the goals - or does it?

Some of these chasps you mention served their time in the '84 government without mentioning the monsterousness. Bought off? By preference? Warren Frear at least mentioned the 84ists' vileness in his bio. Social liberalism is the vital consort of that coup. No matter its merit.

In retrospect, if Muldoon had held off the election, I would have voted for him. At least he prevented me from ever voting for Labour.

(However I did vote for Andrew Little on David Cunliffe's recommendation; joining this ridiculous (I laughed endlessly) party hoping that Cunliffe would have the bravery to do the necessary of a Jeremy Corbin (but the middle class will be the middle class (mostly)))

I suspect Little is alot like Trump in that he insists on being surrounded by people who only say 'Yes'.