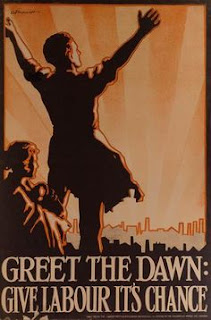 No real advice. What is needed are policies that Andrew little can get his teeth into - but when?

I think too much is being read into Michael Wood's success in Mt Roskill. He got seven thousand less votes than Phil Goff got in 2014.

National didn't seriously try in an electorate they never thought they could win.

If Labour think that Wood's win is a great sign of their electoral appeal they could be disappointed come the general election this year.

Simon Wilson is a middle class liberal, a group nowadays indistinguishable from the neoliberal technocrats and managerialists who offer constant excuses for the status quo. This group holds both a neo-laissez-faire economic and a socially liberal world view.

Now, neoliberalism is a form of extemism that seeks to subjugate every aspect of life to it's "rational" economic values. Since fascism may be defined as the subordination of every part of the State to a totalitarian and nihilistic ideology, I would argue that at the very least in spirit neoliberalism is a strain of fascism - which is why apparently socially liberal urban types like Simon Wilson see no contradiction in his doe eyed attraction to führerprinzip.

If as a middle class winner from neoliberalism Simon Wilson cannot conceive of politics beyond managerialism of the existing ideology then rationally all that is left for the electorate to chooose is what type of party leader the one party state has.

"In 2017, it is still possible for a member of the Labour Party to be 'misogynistic', 'racist' and 'homophobic' – but not openly."

Which of these are you suggesting ought to become more acceptable?

I pretty much agree with all Chris contends. One thing I suggest is that in politics the leader and broader leadership must have both adherence to the core doctrine AND popular appeal. Kirk, Muldoon, Lange and Key all had this appeal in spades. To be elected in a media age bland and untelevisual fails to cut the mustard. Think Trump, TV reality star and Tweeter. Sad really but necessary to electability.

The population is over Labour since the great divorce when it decided NZ was a "deeply racist country" and then went all weird with identity politics, rape culture (and #3? -another marvel of the sociology department).
The Indian barman in Queenstown thinks New Zealanders have it "way too easy" so I suspect not a Labour voter, since generosity has been the Labour/Green hallmark?

I would suggest get them all out in the open. Dealing to them is the issue. The Left tendency toward demand / compulsion seems to drive the holders of these attitudes elsewhere. To understand / persuade may be a better strategy if you need those votes.

Simon Wilson seems to suffer from a strange virus that has sent people fronting the NZ public into a stage of becoming a gibbering demagogue, modern-style. Apparently in ancient times that description applied to an advocate for the common people.

But many now who front the sound or sight waves for long enough, grow to be bigger than the sum of their parts, especially their brains and minds,
such as Simon Wilson, Sean Plunkett, Mike Hosking, Paul Henry, Paul Holmes,
Maggie Barry etc.

'Which of these are you suggesting ought to become more acceptable?"

Which do you think will disappear by decree?

Leaders are a necessity in politics. The alternative is "managers" of whom we've had far too many of recent decades

We also need to avoid leaders who claim to be uniquely inspired,uniquely capable and, above all, uniquely possessed of a relationship with the nation, the Zeitgeist or "Destiny".

Yes, Sanctuary, I agree we should avoid the Führerprinzip, at all costs. And its most obvious incarnation is about to take his seat in the Oval Office.

Our talking chief--the reason The Ralston Group was closed down? As acclaim.

Like W.P.Reeves of the Dom moving to the BOP just before Richard Long took over. And employee Jane Clifton and others' letter of guilty(?)acknowledgement-of-the-fired(?)-gent letter to that paper. About her only word for the old demo-cracy, forced out of her by middle class scruple.

Excuse me for my over-assumption in previous posts leading to patronizing.

I do it in the Ebro, with George Borrow and his 'enteros', otherwise in the morning I never think my opinions are worth publishing.

Vol.
Pardon me, but what the hell does that all mean? Either you have broken the rule that says first we post THEN we drink, or you are so much of an insider that us peasants don't stand a show of understanding what you write. Either way, it's a waste of a post.

Every now and then I thought that I recognised a word. Although I may have been mistaken.

Chris, maybe you should add another 'rule' to Bowalley Road postings: only English, Maori, and New Zealand Sign Language. Just a thought.

Have some respect for artistic genius!