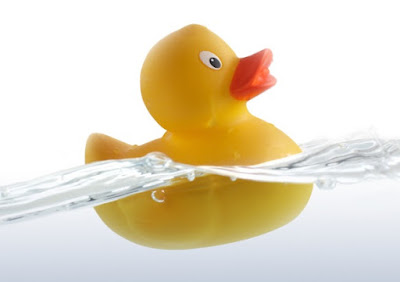 
THINK OF YOUR GOVERNMENT, Prime Minister, as a rubber ducky floating in a bath from which someone (and we all know who) has just removed the plug. The bath is very full, so it will take some time to empty. But, high and dry your rubber ducky will be, Prime Minister, if you do not find some means of either replacing the plug, or refilling the bath.
Replacing the plug will be tricky – but not impossible. Essentially, Prime Minister, you need to come up with a political persona packing the same stopping power as your predecessor’s “cheerful chappy with $60 million in the bank and happy to leave it at that” routine. We’re not about to suggest that you march around the Beehive balcony blowing your own trumpet like poor old Geoffrey Palmer, but we’d be failing in our duty if we let you go on thinking that National’s rubber ducky is going to be saved by all that “Southern Man” shtick.
A quick stocktake of your political assets shows you to be intelligent (your enemies even accuse you of being an intellectual!) hard-working, effective, and capable of projecting a steely determination to achieve your stated goals. These are all essential qualities in a leader, so it’s good that you’ve got them. The $64,000 question (which is, by the way, the exact total of Extortium’s latest invoice) is how to turn these assets into a plug.
You said something a while back about the size of New Zealand’s prison roll being both a “moral and fiscal failure”. That was good – very good. Not quite up there with Tony Blair’s “tough on crime, tough on the causes of crime” soundbite – but close. We can work with that.
One of the problems with your predecessor’s persona was that it was a little light in the moral weight department. How did you put it in that North & South article? Something about John “skipping from cloud to cloud”? Coming after the rather dour and schoolmarm-ish Helen Clark, this lack of gravitas didn’t really matter (in fact it was an advantage) but after eight years, John’s “What, me worry?” act, was wearing a little thin.
We’re entering the Age of Trump, Prime Minister, when leaders who know the difference between right and wrong, truth and falsehood, wisdom and foolishness are about to go over extra bigly (as the new president might say) with the voters.
That’s the beauty of your “moral and fiscal failure” line. It’s such a canny mixture of heart and head. What’s more, it also plays, in a very positive way, to your strong Catholic faith. Plenty of people will have told you that this is a political negative that should be played down as much as possible. But, we at Extortium don’t see it like that at all. We look at the global response to the ministry of Pope Francis I; at his enormous cross-over appeal; and cannot see any reason why we shouldn’t be able to get some of that love, mercy and humility vibe working in your favour.
Heart and head, Prime Minister, heart and head. Don’t be afraid to quote scripture (or poetry) in relation to the dreadful condition of the poor. But, at the same time, don’t let your opponents get away with making all kinds of promises that they can’t possibly keep. Play up this “social investment” idea of yours for all its worth. National Party voters generally resent seeing their taxes spent on people they regard as wastrels and crooks, so the idea of spotting “vulnerable children” early and steering them towards a more taxpayer-friendly future is pure electoral gold.
It’s the same with prisons, Prime Minister. Portray comprehensive rehabilitation of prisoners as both the right thing to do, and a way of saving money – lots of money – and you’ll not only keep the conservatives on board, but also the liberals. Voters like their politicians to be both caring and cautious. They want a leader whose a spendthrift with love and kindness, and a tightwad with their taxes.
Pull that off, Prime Minister, and National’s rubber ducky will never hit the bottom.
Alternatively, you could keep her bobbing happily about by lavishing generous tax-cuts on us all.
This essay was originally published in The Waikato Times, The Taranaki Daily News, The Timaru Herald, The Otago Daily Times and The Greymouth Star of Friday, 30 December 2016.
Posted by Chris Trotter at 11:19

Not sure I approve of giving the nats such good advice; He might take it .
Cheers David J S

"We’re entering the Age of Trump, Prime Minister, when leaders who know the difference between right and wrong, truth and falsehood, wisdom and foolishness are about to go over extra bigly (as the new president might say) with the voters."

Nah! All that's happened is that cerebral bastards are being replaced by visceral hyper-bastards. It hasn't yet happened in New Zealand. But it will.

You don't win el;actions on prison reform. While it is a good thing for govt to do, the prime focus in elections is the concerns of voters. Which will be housing, jobs and general economic well being. On the latter two the govt is in a good space. But a lot more work to be done in housing.

To depart from the moral vaccuum of the Key style, English could fashion his government into that of 'compassionate conservatives' and make social progress in New Zealand ie address housing, homelessness, poverty etc

Let's hope English is surrounded by advisors that can actually think.

There is no such thing as a compassionate conservative. Not anymore.

"Let's hope English is surrounded by advisors that can actually think."

"There is no such thing as a compassionate conservative. Not anymore" Yes there is GS they're called Labour.

Bushbaptist, you are possibly correct, but I'm a bit beyond joking about compassionate conservatism at the moment. They have become horrific in their mean spiritedness and blame culture. You can't actually have a discussion with them anymore. I've tried posting quite respectful comments on one or two right-wing websites, only to be banned, blocked or piled on with such vindictive abuse that it's not worth the bother. The problem is that they tend to live in their own little bubble these days. They never come into contact with the working class, they frequent the same news sites, and it seems to be a feedback loop that makes them more and more twisted. So fuck 'em.

These twin advice pieces are very good indeed Chris.
On Labour and the Greens you know I see the latter as a kind of slimy toxic algal infestation, much like Lake Forsyth on Banks peninsula but less natural (not from dairy in this case but you bet the Greens will lie and say it is).
I have warned for years now that Labour should beware and indeed target the Greens. The easiest way to do this is to show how hugely unsuccessful they have been. A complete waste of space and our money there in parliament. And internationally all they have done is block nuclear power so we burn more coal than ever, destroying the climate. Greens cause AGW!

If you want environmental change join the Labour Party if you are Left or National if you are Right and get active within. And for the Left, the Greens could easily do a deal with National one day (out of desperation by both) so why Labour would cosy up to them .... sigh.
As for your advice to English. Spot on with that phrase of yours, very clever: ‘….a leader who’s a spendthrift with love and kindness, and a tightwad with their taxes.’ That’s a winner.

Agreed GS. Thee was an element of droll humour in my earlier comment. To use the term "Compassionate Conservative" is an oxymoron.

Our problem is that the main parties are really one party with two branches. One a tiny bit more compassionate than the other. I have stated often that what we need is two main political parties who are polar opposites, that way people have a genuine choice instead of the Tweedledee/Tweedledum that we have now.

For your Info Charles!