Not Being Venezuela: The Political Logic Of The Labour/Green "Budget Responsibility Rules". 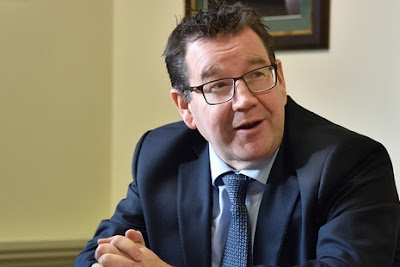 Labour/Green's Responsible Face: Don’t be too quick to condemn Labour and the Greens for cautioning their supporters against excessive economic and political expectations. Both parties know how important it is to inoculate themselves against the Right’s accusations of economic ignorance and irresponsibility.
FOR THOSE WHO THINK Labour and the Greens are being too cautious, economically-speaking, I have only one word: “Venezuela”. Andrew Little may not resemble Hugo Chavez in the slightest. Nor are Labour and the Greens, by any stretch of the imagination, Bolivarian revolutionaries. But, to hear the Right tell the story, New Zealanders are being courted by dangerously left-wing political parties. Given half a chance, we are told, Little and his Green sidekicks, James Shaw and Metiria Turei, will happily transform New Zealand into the Venezuela of the South Seas.
The reasoning behind this outlandish charge is simple:
Because the Left has never seen a problem that could not be fixed by throwing more money at it, the Right argues, all left-wing governments end up spending themselves into a fiscal crisis. Afraid of taking the harsh economic measures required to balance the country’s books, these leftists then decide to maintain the living-standards of their followers by taxing the rich ferociously and borrowing like there’s no tomorrow. Very soon the country’s international lines of credit are exhausted. At this point, the clueless government decides to crank up the state’s printing presses – flooding the country with paper money. When the overseas suppliers of vitally important imported goods refuse to accept this increasingly worthless currency, the government responds with rationing and harsh import and price controls. In the face of widespread protests, the now desperate government resorts to increasingly authoritarian methods of political control. Pretexts are found for shutting down the oppositions’ media outlets. Government supporters confront government opponents in the streets. Violent clashes ensue. As the next scheduled general election draws near, the embattled left-wing government must choose between pushing forward into full-scale dictatorship (thereby risking a military coup d’état) or submitting itself to the judgement of an outraged and/or disillusioned electorate. Either way, their own – and the country’s – prospects are bleak.
Unfortunately, the historical record offers more than a little confirmation of this alarming right-wing narrative. Even here, in Australasia, the precedents are not all that encouraging. In the case of both the government of the Australian Labor Prime Minister, Gough Whitlam, and that of our own Norman Kirk, there are disturbing echoes of the above scenario. It certainly describes the sequence of political events in the Chavistas’ Venezuela.
Indeed, it is possible to argue that the grim fortunes of the social-democratic governments of the 1970s – especially the fate of Salvador Allende’s Popular Unity government in Chile – lay heavily on the minds of New Zealand and Australian labour leaders in the 1980s. Also before them was the abject failure of the French President’s, Francois Mitterand’s, socialist-communist government. Elected in 1981 on an avowedly left-wing programme, it was forced, within months, to execute a humiliating U-turn. The scale of French capital flight was economically unsustainable.
That the Right was in large measure responsible for the economic and political difficulties which brought these social-democratic governments to their knees, in no way invalidates its critique. The Right knows that a left-wing government genuinely committed to the uplift of its marginalised and exploited supporters has little choice except to adopt the “tax and spend” policies outlined above. They also know how, in the chilling language of Richard Nixon and Henry Kissinger, to “make the economy scream”.
So don’t be too quick to condemn Labour and the Greens for cautioning their supporters against excessive economic and political expectations. Both parties know how important it is to inoculate themselves against the Right’s accusations of economic ignorance and irresponsibility.
To a confirmed leftist, the Labour Finance Spokesperson’s, Grant Robertson’s, and the Green Co-Leader’s, James Shaw’s, statement that: “New Zealanders rightly demand of their government that they carefully and effectively manage public finances”, will undoubtedly sound a rather flat ideological note. So, too, will the “Budget Responsibility Rules” to which Little, Robertson and Shaw have pledged themselves.
Delivering “a sustainable operating surplus across an economic cycle”; reducing “the level of Net Crown Core Debt to 20 percent of GDP within five years of taking office”; and promising to “maintain [Government] expenditure within the recent historical range of spending to GDP ratio”: these are hardly the sort of slogans to summon the proletarian masses to the barricades!
What they just might do, however, is spike the rhetorical guns of Labour’s and the Greens’ political opponents – making it much easier for the swing voter to believe that voting Labour/Green to change the government, is not at all the same as voting for 1,000 per cent inflation and blood in the streets.
This essay was originally posted on The Daily Blog of Saturday, 25 March 2017.
Posted by Chris Trotter at 10:56

Nice caution Chris. The answer to naked greed and entrenched social advantage that is our "capitalist" construct is not equality of outcomes. It is equality of opportunity.

Labour have to stop shouting about providing outcomes, they need to focus on letting NZers make a difference for themselves. If we were to insist upon equality of opportunity we would target the areas where it begins as the places to deliver: education, health, housing. And to prove ourselves "egalitarian" rather than "anti capitalist" we might just encourage as many people as possible to be their own boss. And if that gets paid for by some redistribution fair enough, we can start with corporate tax avoidance, and a few percent on the top tax bracket. The message is that tax is what we pay to have a civilised society.

Another thing that would help Labour is to get serious about a fair and easy interface with the things we pay tax for: government services. Being a beneficiary of state assistance is a common experience. The issue at hand here is that common experience is that the relationship is contentious and deliberately difficult. National people will always say kill the poor, somebody has to signal a more caring approach to society. The best way to begin is to decorporatise the public service and make them public servants. And for them to see the public as the people they serve, not clients but citizens.

In the US, where much of this bullshit originates from – successive neoliberal governments have cut taxes for the rich and cut welfare for the poor. And it has inevitably resulted in huge budget deficit blowouts. At the moment, the neoliberal regime in the US is propped up almost entirely by Chinese and to some extent other East Asian bond purchases. And the Chinese have come to the conclusion that perhaps they should spread their risk a little more, so let's see where that leads.
If you want to know what fiscal irresponsibility is then you should perhaps look at the experimental laboratory that is the US. Those states who have gone the furthest in their neoliberal lunacy have the crappiest economies. I think it's time that we started ignoring the conservative views about leftist policies and started investigating the economic results of theirs.

The "Budget Responsibility Rules" give Labour the chance to lead from the Centre with the wealth building "austerity" needed for more widespread and accelerated prosperity generation with participation in the responsibilities and "dividends" of it by all.

Lets hope they have the courage to come up with the actual policy proposals of more investments etc. through domestically financed savings, as the alternative to seductively hedonistic "freely consumable tax reductions" which will create wealth only for those saving and investing those tax reductions.

To rely only on foreign investment would reduce NZ to a "banana republic" in principle.

Unfortunately for National in this country records show that Labour govts overall have proven to be more fiscally responsible. Thats a hard nut for the Right to chew on. Thats why if its not dancing Cossacks its some other pitiful scare tactic aimed at that gullible govt changing percentage of the NZ electorate from supporting Labour/Green.

It also needs to explain to the voting public why specifically centre-left policies are good for the economy in ways that centre-right policies are not.

If it fails to make this case, the centre-left will either become (yet again) the centre-right lite OR be dismissed/patronised as good at redistribution but not at wealth creation.

Either way, it's period in office (if it got there) would be short.

If there is nothing to fight for, there will ne no fight.