Friends In High Places: Will Jacinda Be Swept Into Power By Another “Revolution From Above”? 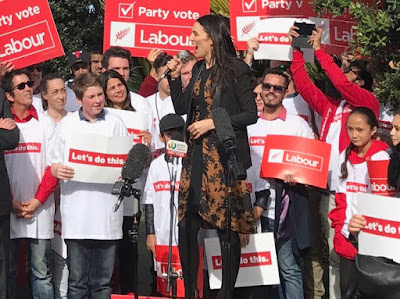 
This essay was originally posted on The Daily Blog of Monday, 7 August 2017.
Posted by Chris Trotter at 11:29

Yup, still waiting for the high skill high wage economy that adds value instead of exporting raw materials and unfinished products. Been waiting since Roger Douglas promised it 30 odd years ago. All I can conclude is that

a. Douglas was lying – wouldn't surprise me, but wouldn't surprise me if he believed his policies were going to have that affect either, because he is a true believer in the Eric Hoffer mould.
b. They don't actually care, because they and their voters are doing okay.
c. They actually believe their policies are producing or have produced it. In which case they are basically blind.

Everyone is affected by the poor state of our waterways and a powerful motivator for action. It will be interesting to see how many farmers along with councils and industry in general are willing to truly clean up the waterways. The free-market capitalism’s abysmal depths are pretty murky. If Jacinda can achieve broad acceptance on Labours clean water policy and get the powers that be around the table then that is a massive start.

Chris, do you read anything about the world, or only the history that supports your world view.

One question: what do you think is at the heart of Venezuela's current capitulation to the abysmal depths?

Nope, National are just too far ahead in the polls. Dream on Sir, your queen will not be crowned. She is young and silly, hardly PM material. Go Bill, there may be two terms for him yet!

Mark – you read anything about the world, or only the history that supports your worldview. You have a whole laboratory in the US to look at. Here are four articles, I'm sure you could find more. :) Abysmal depths indeed.

So you think you can persuade 'm Chris. Or , more to the point, Her. That's all I can take from this. An out-there point of possibility. The Empress decides in our favour.