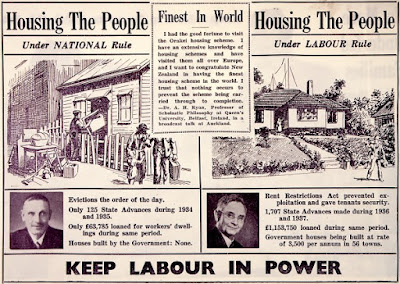 The House That Jack Built: A Labour Party campaign advertisement for the 1938 General Election contrasts the National Party's approach to housing the people before Labour came to power in 1935, with John A. (Jack) Lee's internationally acclaimed state housing programme.
“THIS IS THE HOUSE THAT GREED BUILT.” The house in question – a tumbledown shack – is the first in a series of five images. The others depict a working man down on his luck, a bloated capitalist, and the “Tory Press” (presented, delightfully, as a bellowing cow). The series ends with John A. (Jack) Lee.
Dressed as a carpenter, and positioned in front of one of his new “State Houses”, Lee’s caricature beams out of the pages of the 11 March 1937 edition of the Labour Party newspaper, The Standard. The caption beneath the caricature reads:
“This is the man with the housing plan who’s queered the pitch of the man who waxed rich by fleecing the man who lived in the shack now pulled down by Jack and replaced by the house that Jack built.”
Left-wing nostalgia? Of course. But The Standard cartoon tells us a lot about the first great state-driven effort to accommodate ill-housed and homeless New Zealanders, and raises some very thorny questions about the reluctant half-measures of 2017.
As unquestionably the biggest voter motivator of this year’s general election, “Housing” should be driving National and Labour towards ever greater competitive efforts. Their respective plans for housing the homeless and helping young people into their first home should be as imaginative as they are comprehensive. After all, as The Standard cartoon attests, New Zealand has done it before. What’s stopping us doing it again?
The short answer is: The Market.
When Jack Lee was “queering the pitch” of rack-renting slum landlords, the New Zealand economy was still struggling off its knees. Years of economic contraction had harmed every sector of the economy and the construction industry was no exception. People were living in shacks because nobody was willing to build new houses for anyone except the most wealthy. The houses that Jack built were possible only because there was an abundance of both labour and materials just waiting for the capital investment to put them to profitable use.
That is certainly not the case in 2017. The combined effects of very high immigration and the catastrophic Christchurch earthquakes have mobilised men and materials to the point where the availability and cost of both has now become quite inelastic.
Labour’s Kiwibuild programme will struggle to assemble the thousands of construction workers needed to erect the 100,000 houses it promises. The competition with private construction firms, into which the state will be forced to enter for land and building materials, will be intense and eye-wateringly costly. Keeping these structures “affordable” for young, first-home-buyers will be a mighty logistical challenge.
It’s a conundrum which calls to mind another housing cartoon. This one depicts a lanky “Manpower Officer” [a reference to strict wartime controls over labour] whip in hand, overseeing a hive of state house construction in Auckland while, behind the gate he’s seated on, privately-owned green fields stretch away unexploited. Published by Building Progress in the late-1940s, the cartoon offers a vivid illustration of the way “excessively high” levels of state activity in the economy are said to “crowd out” the opportunities for private investment. (The inclusion of the “Wellington Express”, carrying decision-makers away from Auckland, strikes a thoroughly contemporary note!)
The concerns of private construction firms in the late-1940s were well justified. Had Labour won the 1949 election, Auckland would have been a very different city. Compact, with state-designed and constructed houses and apartment blocks, the whole isthmus would have been bound together by an intricate, state-owned and run public rail network. A city constructed on the North European model. Instead, under National, New Zealand built its very own Californian nightmare.
The best way to come to grips with the Housing Issue is to conceive of it as a key battleground in the class struggle. It’s all there in that Standard cartoon: “The House That Greed Built” versus “The House That Jack Built”.
Housing the disadvantaged in dwellings which guarantee them comfort and dignity is not something the private sector will ever do uncoerced. That’s why a genuine “people’s government” will unashamedly apply its thumb to the scales of supply and demand: deliberately distorting the market in favour of the tenant and the first-home-buyer; forcing down rents and house prices by “queering the pitch” of speculators and slumlords.
A pity, then, that 2017’s “House of Cards” contains no Jacks.
This essay was originally published in The Waikato Times, The Taranaki Daily News, The Timaru Herald, The Otago Daily Times and The Greymouth Star of Friday, 23 June 2017.
Posted by Chris Trotter at 11:20

of course all this would be premised on a need to reduce the rampant (and accommodated) offshore demand , both non resident and migrant to allow the necessary to be performed.....you say no jacks in the house of cards, but there may well be one on top in the shoe...and Labour might just be the dealer...one thing is for sure, National have been playing with a marked deck.

Off topic I know, but a friend of mine – when he was a poor student about 50 or maybe even 60 years ago now couldn't afford one of the novels for his English class. So on the way home every day he popped into John A Lee's bookshop where it was prominently displayed on a shelf and read a few pages a day while standing at the shelf allegedly browsing. Lee caught onto this and wasn't at all pleased. :) I'm not quite sure how this affects his socialist standing though. God I just remembered, it was round about 1957. So definitely 60 years ago.

Catherine Delahunty says: "The Right is desperate to keep us in a tidy little green box, focused on the environment minus people."
Ever since the Savings Working Group showed us the correlation between house prices and immigration this (until recently) has been ignored or had a muted response. Last election Jan Logie proclaimed "let me assure you migrants [by implication migration] are not to blame for the housing crisis".
https://thestandard.org.nz/words-on-leaving-the-house-of-pain-and-strength

The Archdruid compares todays hate to the Victorian obsession with sex.
http://www.ecosophia.net/hate-new-sex/

He who skulks like a mangy dog around the blogosphere said...

Since then we crossed the rubicon of globalisation
Once Redcliffs was an unprepossessing fishing village, distinguished by a collection of modest fishermen's cottages. Most have now disappeared, replaced by more luxurious residences, and property values have escalated.

“It's a standing joke that we're being taken over by the Americans and British, who have taken advantage of the stronger property markets in their own countires and favourable exchange rates”

“What other parts of the city have such nice walks?..…

Going back people would have been horrified to find that they were not that important compared to foreigners and their money. How naive looking back?
But isn't auckland in the top 10 most desirable cities? Weren't John key and Helen Clark very popular?
Maybe we just aren't allowed to hear another side - censorship by a plurality?

Guerilla Surgeon
No, you haven't looked at all the evidence. I have looked at a lot of it, but not nearly all of it – and in the academic databases. And unfortunately I threw it all away when Chris forbade you from introducing this topic ever again.
https://bowalleyroad.blogspot.co.nz/2017/08/can-winston-ride-jacindas-wave-to.html

This cannot be true?
Axios national politics reporter Jonathan Swan suggested in an appearance on MSNBC’s Andrea Mitchell Reports this week that West Wing Democrats and globalists whose allies have never been able to handle Breitbart News’ relentless “40 minutes of hell” of pressure for causes important to working-class Americans of all backgrounds were frustrated that Trump was reading articles from Breitbart News. A New York Times cover story acknowledged that there is “no real precursor for Breitbart” of an outlet that has so quickly emerged to “dominate the political conversation in a pivotal election” like Breitbart News did during the 2016 election cycle.
http://www.breitbart.com/big-government/2017/08/26/reports-west-wing-dems-blocking-trump-from-reading-breitbart-news/
Why is no one asking why 1/3rd of Aucklnad's construction is being built by Chinese? Did we vote for that?