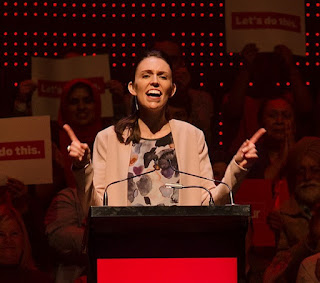 Winston is now unambiguously the Kingmaker. Yet, paradoxically, he's found himself in that position at the very point at which his party is shedding considerable support.

What an interesting election.

Don't confuse me with facts - just believe in my smile. The policies are as deep as a carpark puddle, but have some real 'teeth' behind them.

Victor: I don't believe that Winston has lost any support.

New Zealand's polling is a far cry from YouGov with the British elections. Only one of the polling firms even reveal how many people said they didnt know who to vote for or refused to take the poll. For a country that doesnt require voting by law - these are critical figures.

The incredibly high polling of the Tories prior to the UK election was because a third of the electorate were being cut from the polls because they didn't give a preference when interviewed. As Corbyn won over electors Labour swelled with bringing "Don't Know" voters into the graphs which made it appear as if Conservative support was falling. This is the situation with NZ First. As a percentage of possible voters, it's support hasn't dropped over the past two months. National's hasn't either.

There is only a handful of polling firms in NZ. The TV3 Reid Poll hasn't been updated since Andrew Little resigned and Metiria Turei first hit the headlines. Roy Morgan was started its surveying well before the Little / Turei changes and didn't finish with its sample until well after.

Colmar Brunton and UMR are the only polls conducted after the turmoil - both suggest Winston is heading toward the best election he has had under MMP. Both firms suggest National has a 3pt lead over Labour and Colmar suggests the Greens may well fall beneath the threshold.

National's current polling - if firm - (37% of eligible voters) is higher than in any MMP election. In the last election National's 36.64% (with a 77% turnout) was enough for National to grab 60 seats!

Labour's stunning turnaround is on the back of pulling in the undecideds... and absorbing the Greens. 87% of Kiwis now say they know who they will vote for - which would be a fantastic turnout... the only time in the past 30 years to get that number flocking to the polls was the first MMP election. Unfortunately, not one firm canvases how likely their respondents are to vote - which is what this election is going to be decided by.

I hadn't focused on the rise in the percentage saying they know who they will vote for.

It opens up a heap of alternate possibilities.

Thanks for pointing this out.

Magic thinking Chris.
Are you on the turps?
All we have here is a collapse of the Greens thank heavens, as I have wished for for years. So well do Arden for that. But all we really know so far is a smiley fresh face, we have little idea about in the longer run. Yet where is here great team to be the competent cabinet? Nats have that. You say grey but actually many are not and grey means wise, experienced, sober.

As I understand it she still has not got the numbers with WinFirst alone so will need more which makes it same as before she arrived. It will probably be up to National to decide if they will offer the old crooked fox enough cake. They may prefer not to, and sit back and enjoy seeing how he eats red riding hood for breakfast.