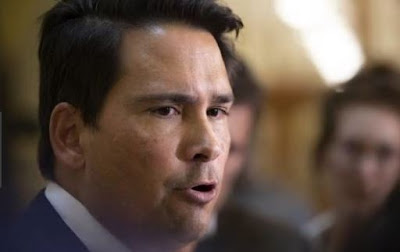 The Public Calls Simon Bridges To The Stand: For Simon Bridges and Paula Bennett the Jami-Lee Saga is far from over. A great many questions have accumulated over the course of Labour Weekend and it is clear that neither the Leader nor his deputy can answer them without the risk of re-igniting the political firestorm of the past ten days.

THE RIGHT’S RESPONSE to Jami-Lee Ross’s temporary detention at Middlemore Hospital has been interesting. The National Party’s defenders flatly reject the idea that its leadership has acted in any way improperly in relation to Ross. And yet, piecing together what little information has made its way into the public domain, it is difficult to avoid the conclusion that at the point of crisis, early on Sunday morning (21/10/18) Ross was in the company of a National Party MP. Whether it was this MP, or someone else, who became so alarmed by Ross’ behaviour that they called the Police, remains unclear. What is certain is that Ross was conveyed to Middlemore because he represented a danger to himself, or others, and against his will.

That, barely 48 hours later, Middlemore was willing to release Ross strongly suggests that the circumstances which gave rise to his temporary detention no longer existed. Friends have provided a place of refuge for him out of Auckland where he is currently recuperating, taking stock, and considering his future.

For Simon Bridges and Paula Bennett, however, the Jami-Lee Saga is far from over. A great many questions have accumulated over the course of Labour Weekend and it is clear that neither the Leader nor his deputy can answer them without the risk of re-igniting the political firestorm of the past ten days.

If, for example, the blogger Cameron Slater’s claim that three of the four anonymous complainants who featured in the Newsroom exposé of Ross’ behaviour towards women are employed in either the Leader’s or the Deputy-Leader’s office is confirmed, then the public may feel that they have been short-changed when it comes to being given all the relevant details surrounding the charges levelled against the Botany MP. The public may also begin asking why these details are available from a blogger, but not from the journalists of the Parliamentary Press Gallery?

Questions are also being asked about whether or not, over the course of the past month, the National leader and/or his deputy were in contact with Ross’ medical adviser/s? And, if so, whether those advisers had warned Bridges and/or Bennett that it would be unwise to do or say anything likely to jeopardise Ross’ already compromised mental state? If the public were to discover that the National Party leadership had been explicitly cautioned against naming Ross as the probable leaker of Bridges’ travel expenses – but went ahead and did it anyway – then they might form the opinion that Ross’ manic night-time ride from Auckland to Wellington, and his epic media stand-up the following morning, were entirely avoidable events.

Such speculation cannot possibly be helpful to Bridges and Bennett – raising as it does the thought that Ross may have been used as the unwitting instrument for rallying the National Party caucus behind a leader whom the voters showed little sign of warming to or respecting. The idea of making a mentally unwell MP the means of achieving such a disreputable objective is not likely to inspire very much in the way of trust or confidence in the putative perpetrators. Quite the reverse, in fact.

The problem with this sort of speculation is that much of the known conduct of the National Party leadership appears to reinforce it. If someone was intending to push a mentally fragile person over the edge, then threatening him with the anonymous testimony of four aggrieved female complainants, might recommend itself as a highly effective way of doing so. If that someone then publicly suggested that the person in question had been behaving in ways incompatible with his status as a married man, well then, it’s easy to see how the notion that he was being pushed to the limit might take a firmer grip on the public mind.

To the truly cynical, the sudden appearance, in the very midst of Ross’ jihad against his former National colleagues, of a sensational exposé detailing the Botany MP’s abusive and manipulative relationships with three parliamentary staffers and an unnamed National MP would elicit only the most sardonic of grins. If one was writing the script for such a political melodrama, the line given to Bridges would have to be: “Whew! That was lucky!”

Just how lucky was revealed by TVNZ’s political editor, Jessica Mutch Mackay, on Tuesday evening (23/10/18) when she described how National’s numbers, in the Colmar-Brunton poll being conducted coincident with Jami-Lee’s jihad, were plummeting right up until the moment, mid-week, when the story detailing Ross’ improprieties began to dominate the headlines. The word “fortuitous” hardly seems to cover it!

Questions, questions, questions: there is still so much that we don’t know about the extraordinary events of the past ten days. And perhaps the most frustrating aspect of the whole saga is how unwilling all but a handful of journalists have been to dig too deeply for the facts the public is so anxious to learn.

Fortunately, for the historical record, there is one person who knows a great deal about all of the events touched on in this post. Resting quietly, in an undisclosed but secure location, the MP for Botany, Jami-Lee Ross, waits patiently for all of these many questions to be put to him. How should we expect a man who has nothing left to lose to answer – except with the truth?

This essay was originally posted on The Daily Blog of Thursday, 25 October 2018.
Posted by Chris Trotter at 07:13

Would National Party sacrifice JLR to save their reputation, votes and funding?

There is a conundrum that has been posited that is similar and this is a link to a clever little demonstration of it.
(https://www.youtube.com/watch?v=bOpf6KcWYyw

Interesting that after thinking of all options, is there a mention of another one, to sacrifice oneself to save all the other lives? And is this how leaders can venture into wars so readily which when viewed objectively later, could have been avoided by adopting other measures. Having a moral compass for politicians, can simply depend on whether the public demand one or are slippery about it at heart.

The National party's "Dirty Politics" chickens are coming home to roost. How much more the public, and Nationals own wavering supporters, can be expected to tolerate from a party that has such a toxic culture is going to be revealed over the next twenty four months as slowly but surely the party and its leaders ratings nose dive into a death spiral. National is now the confirmed party of corruption in this country and the stench is palpable. Donations for recovery may never happen again.

Meanwhile over on the sunny side of the house.......

Every political Governing leader or other side leaders ,xmas barbie time.Last xmas,me and my cobber had a wager,that the Dipton dipper,would be the dogs tucker carcass,after the they carved up the National turkey,lost the wager as he came back proud and defiant,im! the leader,only not long after saying,im resigning,having been sitting on the front porch over the xmas break,i said to the wife,this is where i should be.My cobber,repaid my loss.
Not this xmas,the 10%r,will survive,his deputy may have had a change of appearance,though still the benefit basher AND MAY BE IN THE PARTY,BUT NEVER ONE OF THEM.So who sitting waiting out years, for at least another term, this coalition has.Will be a lady leading them,to many drongoe!s in their male chancer!s,and of course they have to make up for the appointed female disaster,the not quite one term not public voted female first N.Z. prime minister,and when it came to the public vote,the lady delivered them the nats their biggest kicking at the ballot box.