Ever-So-Slightly Bonkers: Simon Bridges Plays To His Base. 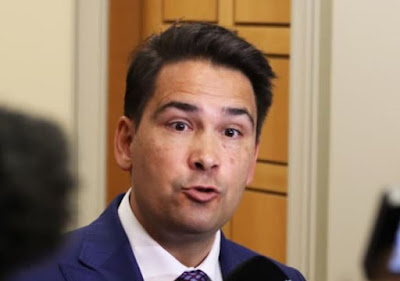 Would You Buy A Used Propaganda Video From This Man? Bridges and the National Party’s strategists have discovered that the ideas and attitudes considered acceptable by today’s editors and journalists are no longer enforceable. The rise and rise of the Internet and the social media platforms it spawned means that the average voter is no longer dependent on newspapers, radio and television for guidance about right-thinking and wrong-thinking.

SIMON BRIDGES may be right. He’s clearly betting everything National has on the New Zealand electorate being neither outraged nor offended by his behaviour. If the polls are to be believed, it’s a wager he and his party appear to be winning. National is only a few percentage points away from winning the 2020 General Election outright. So what if he comes across on radio and television as ever-so-slightly bonkers. Venture out into the “heartland” and it will soon become apparent that he’s not alone.

Time was when the boundaries of political acceptability were pretty tightly defined – and enforced. Back in the days of newspapers and a strictly limited choice of radio stations and television channels. It was a time when editors wielded enormous power. People with complaints about fluoridation might get the occasional letter-to-the-editor published, but unless the editor himself (it was almost always a him) was anti-fluoride that was about it. The same applied across the entire range of social, economic and political issues. There were ideas that it was acceptable to hold and, hence, to read about; and ideas that most emphatically were not.

These boundaries corralled not only ordinary citizens, but their leaders as well. Step outside them and the retribution could be swift and savage. People who look back wistfully to the days when “consensus” reigned, tend to forget the level of exclusion required to give it effect. The state had no need to maintain a strict censorship regime (excepting, of course, in relation to matters sexual) when the finely honed “journalistic instincts” of newspaper proprietors, news and current affairs editors, and television network bosses made state intervention unnecessary. Which is not to say that the occasional maverick wasn’t allowed to make it through the barbed-wire – if only to demonstrate the system’s willingness to tolerate unorthodox opinions. These honourable exceptions, however, served only to prove the rule.

To step outside the agreed boundaries of political orthodoxy required special courage. In the 1950s and 60s politicians enjoyed considerable public respect, which they were careful to maintain by ensuring that their conduct measured-up to the voters’ expectations. Members of Parliament were serious people: much happier to be considered ponderous than over-excited. A performance akin to Simon Bridges’ on today’s (16/10/19) Morning Report would have been career-ending – even in the 1970s and 80s. So, why does he feel so safe in coming across as ever-so-slightly bonkers?

The answer is very simple. Bridges and the National Party’s strategists have discovered that the ideas and attitudes considered acceptable by today’s editors and journalists are no longer enforceable. The rise and rise of the Internet and the social media platforms it spawned means that the average voter is no longer dependent on newspapers, radio and television for guidance about right-thinking and wrong-thinking. Indeed, what social media has revealed to those average voters is just how vast the gulf has grown that separates their own values from those of the “elites”. What’s more, those same average voters are now free to communicate with one another directly. They no longer have to run the gauntlet of their local newspaper editor’s prejudices – or rely upon the news bulletins and documentaries broadcast over “mainstream” radio and television. Today they have their own sources of information – their own news.

This ability of readers, listeners and viewers to go around the “mainstream” has brought about an historic reversal of dependency in the consumption of information. Now it is the editors of newspapers, radio stations and television networks who must absorb the prejudices of their audiences. The advertisers that still pay the bills can no longer be told to take it or leave it when it comes to getting their messages across. When advertising revenue is dependent upon the number of people who “click” an on-line story, editors are required to go after every click they can possibly get. Media content has been democratised in ways not seen since the early years of the printing press. It is no longer a case of “improving” the Great Unwashed by feeding them the ideas of their betters. Today, it is the Great Unwashed who call the cultural shots. Not an altogether pretty picture. As the great impresario and showman, P. T. Barnum, put it: “Nobody ever lost a dollar by underestimating the taste of the American public!”

Nor is it likely, judging by the behaviour of Simon Bridges and his small army of social media creatives, that any politician is ever going to lose votes by underestimating the wit of the New Zealand electorate. He – and they – know that roughly 50 percent (and probably a lot more!) of New Zealanders are not well-off, well-educated and “woke” urban sophisticates. Hell! They’re anything but! Which is why Simon keeps his messages short, simple and brutal, with endlessly repeated stock phrases. “Keys to the Kingdom” anyone?

Ever-so-slightly bonkers? You betcha! Just like his electoral base.

This essay was originally posted on The Daily Blog of Thursday, 17 October 2019.
Posted by Chris Trotter at 11:45

Yes, typical was his interview the other day on National Radio about some bloke who was given residency after six drunk driving convictions. The fact that National allowed him to stay in the country, and the fact that he isn't legally allowed to be expelled made absolutely no difference to his message. Apparently he should have been kept on a temporary visa or something. This is pure emotional bullshit given that a temporary Visa for someone who isn't allowed to be deported from the country makes not the slightest bit of difference – because you can't deport him! But his base on the whole don't actually think very deeply. They'll simply react emotionally and negatively I suspect without even hearing most of the words.

After the uprising of the 17th of June
The Secretary of the Writers Union
Had leaflets distributed in the Stalinallee
Stating that the people
Had forfeited the confidence of the government
And could win it back only
By redoubled efforts. Would it not be easier
In that case for the government
To dissolve the people
And elect another?”

I shall say it again, the NZ electorate is divided almost down the middle. Its a "them and us" situation. That 47%, if polls correct, can support such "bonkers" as the current National team proves it beyond any shadow of a doubt.

Short and brief like his mind. It is not 47%. The polls were stacked.Don't be fooled by these polls because they were predictable. Soiman is still keeping the leader's chair warm -whovever he may prove to be.

How about saying 'simple story and clear enemies' endlessly in response, by some 'hero'. Yep, Labour filtered out all of them. A great talker with a true heart, like they factory-produced in the 30s. I'm not quick enough but those who are have no heart. 'Bought' 'Off'.

Why only Corbyn and Sanders?! So right, but just them?!

When we've all been fighting these 40 years ( well, not me actually -- where the problem may arise).

And , small note , the end so near. These decades of comfort obviously haven't taught me how to cock a handgun at my head.

I guess the continuing failure of the main stream media is due to their arrogance in believing their own bullshit. Just as well there are alternatives.
"Ever-so-slightly bonkers? You betcha! Just like his electoral base."
That's a bit harsh Chris; while Simon does have a bit of a crazy look to his eyes, there's nothing to justify the slur on us right wing voters. Studies repeatedly show that conservatives are happier, have more stable relationships and better life outcomes generally as well as being more attractive to the opposite sex and better looking overall. Your typical lefty? I'll leave it at that but perhaps there are environmental factors at play.
https://youtu.be/FTSvLKY7HEk

There's some truth in that GS, at least there used to be.
The "progressive" left are now likely to be middle or better income and the poor more conservative. Part of that divergence is no doubt down to the excesses of identity politics; the typical working class (or socially conservative or religious immigrant) attitude to "chicks with dicks", for example, is miles apart from that professed by the progressive urban elite.
Chris has a very good essay on these issues over on BFD (behind a paywall) and the massive implications for the political scene.
Perhaps the issue of happiness, general life satisfaction and psychological health is more a reflection of attitude, a willingness to accept the card you've been dealt and get on and make the best of it; the essence of conservatism.

"the typical working class (or socially conservative or religious immigrant) attitude to "chicks with dicks", for example, is miles apart from that professed by the progressive urban elite."
I'd love to see the research that supports this, or is it just another PIDOOMA. (God I love these young people's expressions)