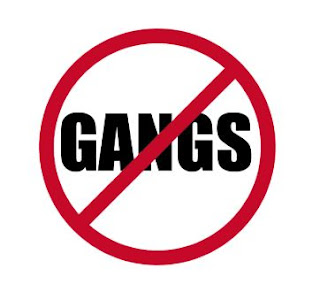 Criminal Enterprises: Gangs are not welfare institutions. Nor are they a substitute for the family their members never had. They are ruthless, violent, criminal money-making machines. That is all.

OKAY, first-things-first. Gangs exist for one purpose – and only one. They are a sure-fired, time-tested institution for making crime pay – and pay big. National is right to go after them, not only because most voters will cheer them on for doing so, but also because gangs injure individuals and damage society. Pushing any other kind of argument simply makes National’s job easier. “Look at the Left”, Simon Bridges will crow. “Soft on crime. The gangster’s best friend!”

In their essence, gangs are based on the notion that there is safety in numbers. This doesn’t just apply to violent conflict where, obviously, the more “soldiers” you bring to the fight the better chance you have of winning it. Safety in numbers also applies to practical criminal behaviour.

Hierarchy is the key. At the top, a handful of leaders, thoroughly insulated from actual offending, give orders to “patched” crime managers who, in their turn, send out wannabe gangsters to do the actual selling, thieving, hustling, whatever. All proceeds flow upwards. Those at the bottom get the least, those at the top the most. Patched membership of gangs is strictly rationed to preserve the organisation’s essential pyramidal structure.

A gang can only remain effective if its hierarchy is respected. Absolute loyalty is demanded and ruthlessly enforced. Among gang members and associates no person is more despised than the “nark”. This animosity is entirely rational. Nothing brings down those at the top of a gang hierarchy more effectively than an informer.

Keeping the hierarchy safe explains the aura of danger and violence that surrounds every effective criminal gang. It is a feature, not a bug, because without the ever-present threat of serious and/or fatal violence – against outsiders who would do it harm, and insiders who dare to flout its discipline, the gang would swiftly fall victim to its criminal competitors, or the Police.

Gangs are not welfare institutions. Nor are they a substitute for the family their members never had. They are ruthless, violent, criminal money-making machines. That is all.

National knows this. Its members and supporters see the effects of gang activity all the time. Small businesses and farmers fall victim to their depredations almost every day. Local professionals in the provinces see their effects everywhere. In their surgeries, if they’re doctors. In their classrooms, if they’re school principals. On the town streets, if they’re the local Police Sergeant. They talk about it grimly, over whiskies, at the local Rotary Club – and complain about it loudly to their local National Party MP.

In the major cities it’s even worse. These provide the most lucrative markets for criminal enterprise: for drugs; for stolen goods; for all those other things that “a guy’s gotta have” – but which the state forbids. The cost to metropolitan New Zealand of these gang activities is huge. The methamphetamine trade, in particular, destroys lives, careers, families, entire neighbourhoods. Its victims are responsible for an alarming percentage of serious theft and fraud. Inevitably, their moral, mental and physical deterioration imposes heavy burdens on our health and corrections systems. Those who see methamphetamine’s effects up-close: the resident doctors, nurses, police officers, probation officers and social workers who clean up its mess; despise the gangs who are the drug’s principal distributors. The gangsters also see the enormous harm caused by their offending – but they just don’t care.

So, if National knows this – and frames its policy accordingly – why don’t Labour and the Greens? What happens inside their caucuses when someone like Greg O’Connor, or Willie Jackson, or Stuart Nash stands up and tells them what the gangs are really like? Obviously, their caucus colleagues do not nod their heads and say: “Thanks guys, it’s always good to get the perspective of people with personal experience of the harm gangs do to individuals and communities. What we all need to do now is come up with an effective response.” It can only be supposed that a majority of Labour and Green MPs respond to the anti-gang attitudes of their “right-wing” colleagues with the stock answers of Sociology 101.

When “Big Norm” Kirk promised to “Take the Bikes off the Bikies” in 1972, it wasn’t because he had heard the same sort of slogans repeated endlessly throughout his political career and thought it advisable to do the same. Forty-seven years ago, Kirk’s promise had the punch of the new. That’s because bikie gangs were new – as were the Maori gangs emerging from the rapidly growing provincial industrial towns and urban ghettoes. He couldn’t do it, of course. Putting an end to gangs wasn’t any easier then than it is now.

If overseas experience is any guide, there are two ways of dealing with gangs. The easiest way, adopted by Labour nemesis, Rob Muldoon, is for the government to buy them off. Let them do what they do, but always on the proviso that no “civilians” get hurt. Selling cannabis to their neighbours and their kids – that’s fine. But stay out of the city centres and the leafy suburbs – and stop providing the news media with lurid headlines. The Buy-Off has its merits as a solution, but in the end it is no match for criminal greed. Inevitably, the gangs re-emerge: bigger, better resourced and much more dangerous.

The hard way to beat the gangs is through solid, old-fashioned police work – aided whenever possible by augmented legal powers and the new technology required to make dedicated policing effective. That’s how the FBI brought down the New York Mafia. That, and by using the information obtained through advances in electronic surveillance to apprehend and then “flip” lower level gangsters: promising them immunity and a new identity in return for spilling the beans on the “wise guys” at the top of the hierarchy.

National appears to have chosen the hard way. Yes, forcing suspected gangsters to prove that they are not living off the proceeds of crime before accessing welfare payments is a tough policy. But these are tough guys. Tough – and smart. It always pays to remember that the individuals in question are criminals – well-versed in the art of ripping-off any system incautious enough to offer them something for nothing. Shorn of all its political bells and dog-whistles, National’s policy, by forcing gangsters to rely solely on the income derived from their offending, should make them easier to put away.

It’s not subtle, and it’s not pretty. But, you know what? It just might work.

This essay was posted simultaneously on The Daily Blog and Bowalley Road on Thursday, 31 October 2019.
Posted by Chris Trotter at 06:14

"Nor are they a substitute for the family their members never had. "
Actually, if you ask young gang members – they are. Might be harsh and authoritarian family, but still family. Most of these guys are used to arbitrary harshness and authoritarianism anyway – and abandonment. Until we admit this, no amount of Laura Norder is going to get rid of them.
And Simon Bridges crapping on about it – well, National had 12 years to do something and did nothing. Pure posturing try to get votes from New Zealand first probably.

It will struggle to work because it would take narks to help it do so - and there are nothing more despised than narks.

The notion of gangs being welfare institutions to be protected by the state reached a zenith when Tariana Turia headed the Maori Party.

The Ancient Romans had a simple but effective solution: proscription. This involved the forfeiture and confiscation of offenders' property and their banishment. There were more severe outcomes but we will leave those for now. The essential point is that if you choose to live outside the law then you should in turn lose the protection of the law.

"The first thing the triumvirs did was to order the murder of prominent opponents including Cicero. Marching unopposed into Rome, they posted up proscription lists with names of men who were set outside the protection of law. Anyone could kill a proscribed man, and if they brought his severed head to the authorities they would be rewarded with a share of the victim’s property, the rest going to the triumvirs to pay their army."

Yes, proscription – just the sort of Laura Norder we want here. Let's not bother with due process any of that needless shit. It'll be great. Until someone uses it on you. Jesus wept sometimes I despair about the state of New Zealand society. Particularly conservatives, who love democracy and the rule of law – until they don't. You know what we can use the full powers of the law on the gangs if they commit crimes. We can already confiscate their property if it is the proceeds of crime. But until get rid of the reasons why people join them, they are – like the poor these days – always going to be with us.

The harder life gets creates more gangs. Tougher laws make those gangs become harsher. If you want to stop the cycle that creates gangs then a society has to look after its own and that starts with Government. Look at how Beneficiaries have been treated since the early 1990s. Their incomes have created a group that exists in abject poverty. Abject poverty means more criminal activity, more child abuse, more truants, more prostitution and increased health problems. What does National propose? More and greater poverty. That will mean more prisons and more police. And more gangs. Violence begets violence

Someone actually talking sense about this.

You want to break the gangs, you get them for tax evasion. The IRD, Serious Fraud Office and police would have every meth dealer in the dock tomorrow on tax evasion if they really wanted to.