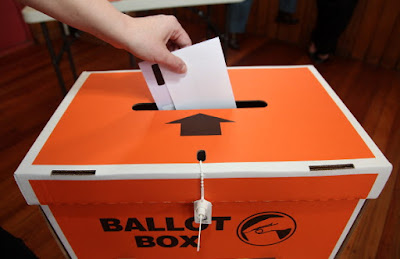 The Best Way: Missing from the on-line voting debate is any reference to the voting system that produces turn-out figures ranging from 77 to 93 percent of registered voters. The voting system used to collect and count the votes cast in our parliamentary elections. The system that involves citizens making their way to a polling station, marking their ballot-papers privately in a polling-booth, and then depositing them personally in a sealed ballot-box.

WHY ARE RETURNING OFFICERS coming out so strongly for on-line voting? Of all the people in the world willing to advocate for a system of voting so absurdly vulnerable to interference and corruption, returning officers should be the very last. And yet, all week, as fears of a record low voter turnout in this latest round of local government elections have grown, it is returning officers who are among the keenest to give on-line voting a try.

The curious fact about this clamour for on-line voting is that its proponents are offering it as a cure for declining voter participation. Young people, notorious for their poor record for joining-in the democratic process, are seen as the group most likely to benefit from this supposed panacea. Missing from the debate, however, is the voting system that produces turn-out figures ranging from 77 to 93 percent of registered voters. The voting system used to collect and count the votes cast in our parliamentary elections. The one that involves citizens making their way to a polling station, marking their ballot-papers privately in a polling-booth, and then depositing them personally in a sealed ballot-box.

This was, after all, the way New Zealanders used to vote in local body elections. Why was it abandoned? Ironically, because voter turn-out was falling, and it was thought that allowing people to fill out their ballot papers at home, over a fortnight, and then pop them in the post, would make the whole process easier, less stressful and more efficient. Predictably, there was a slight up-tick in electoral participation, followed by another slow decline in voter numbers.

Interestingly, the obvious weaknesses in postal voting were never taken particularly seriously by its proponents. That it essentially did away with the idea that casting a vote was something every citizen had a right to do, alone, in a polling-booth, where they could be safe from the influence of husbands, wives, other family members, and (thinking once again of younger voters) flatmates, was not considered a serious enough defect to rule postal voting out of contention.

The thought that a domineering husband and/or authoritarian mother might commandeer their family’s voting papers and cast them all themselves never appears to have crossed the reformers’ minds. Nor, apparently, the possibility that a flat full of apathetic youngsters might simply invite the one member of the household interested in politics to cast their votes for them.

Exactly the same indifference to the possibility that an election’s final outcome may not be an accurate reflection of the electorate’s will is noticeable in the campaigners for on-line voting.

Similar indifference has been shown by those in charge of the 2019 local government elections to the steadily declining efficacy of the New Zealand Post Office. When postal voting was introduced in 1992, the Internet was largely restricted to boffins and geeks. The mail was delivered on every day of the week except Sunday, and a posted letter could travel from one end of the country to the other more-or-less overnight. Over the course of the last 27 years, however, the time taken for a letter to reach its addressee has increased from one or two days to approximately a week. Likewise, the time taken for ballot papers to be delivered and returned. It will be interesting to discover how many 2019 ballot papers, posted no later than 5 days out from the vote-count (as advised) nevertheless arrive after mid-day on Saturday, 12 October. Since NZ Post no longer date stamps letters, it will be impossible to sort out which ballot papers should be counted and which disallowed. There is a real possibility that hundreds – perhaps thousands – of citizens will end up being disenfranchised by New Zealand’s sclerotic postal service.

The nation’s returning officers will, of course, object that anyone who forgets to post their ballot papers can always deposit them by hand in one of the ballot boxes situated in the local library and at the town hall. In other words, to overcome the growing challenges associated with running an efficient postal voting system, our returning officers have set up what are effectively polling-booths to cater for the stragglers.

Honestly, it’s enough to make you wonder why we just don’t admit that postal-voting, never a particularly good idea, has failed, and return to the original – and by far the most secure – method of discovering the electorate’s will. It could hardly be worse than the present system, and it certainly beats the heck out of sending your vote into the void of cyberspace, where neither you – nor the returning officers of the nation – have the slightest notion of where it has been sent, what happened to it there, and on whose behalf, before it ends up as a configuration of pixels blinking mindlessly on some private-sector contractor’s computer screen.

Stealing a hard-copy election is surprisingly difficult and very hard to hide. Stealing an on-line election, however, is a much easier proposition. If it’s done properly, no one but the people who paid for the hack will ever know.

This essay was originally posted on The Daily Blog of Thursday, 10 October 2019.
Posted by Chris Trotter at 13:00

Couldn't agree more.
What actual to NZ and significant problems does electron voting solves?
It creates significant ones; fraud and consequent loss of trust.
Nothing is gain and much is lost by mixing the issues of low voter turnout and voting method.

Also, I suspect postal and electronic voting lower the urgency of a specific polling day- "Ah, I'll post it tomorrow! Oh, polls closed yesterday?"
PS
I am a Software Engineer

Excellent points well made. And I don't understand the reluctance of young people to vote. I couldn't wait and was excited to cast my first ever ballot for Norman Kirk in 1972. You can make a difference.

I'm not sure that it really matters what form of voting we use, apart from the fact that obviously Internet voting is susceptible to hacking. What's happened is that the people who are standing in these elections are completely unknown to many of us. This might be because society has grown bigger and more impersonal. But I wrote the other day about the fact that I did not even know OF more than three or four of the people who were standing for local bodies in my area. They don't canvass any more, so you don't see them at your house. They don't tell you anything about what they want apart from the usual platitudes. And few of them have the guts to put their political affiliation on their notices.
I did however get one of those phone calls from one of the sitting mayor's flunkies, who asked me about three questions including "Has the incumbent done enough to justify your vote?" How the hell would I know? The incumbent hasn't exactly said a lot about what he's done in any of the media that I bother to read.
So I ended up voting for anyone who dared to put labour or green on their ticket, and one guy I knew personally, who works hard for poor people. That's it.
And until some of these people have the guts to tell us exactly what they want to do, apart from "Make xxxx a vibrant and prosperous place" (as if anyone is against being prosperous – though I do know some people on this site do have something against being vibrant) then I'm not going to vote for them. And if any of those eejits in charge had a thought for society at large they'd make sure that the system was changed to give us clear choices. I'm sick of gutless "independents".

It's fine for parliamentary elections as the you only have two ticks. The council elections esp with STV are far too complex to do in a booth. It takes at least half an hour and would be completely impossible.

Postal voting is the best choice still - on-line seems to be years away overseas despite what some people think in NZ.

I agree Chris. If NZ values democracy it should make voting an important social event. Maybe a public holiday with lots of activities around polling stations. It should be a right of passage event into adulthood too. This all points to real people, real events, real polling booths etc. Not impersonal electronic button pressing.