IT ALWAYS STARTS SMALL. Colin James, in his masterful The Quiet Revolution, reminds us that what ended as “Rogernomics” began with the humble potato. National’s free-marketeers rebelled at a departmental proposal to regulate the size, shape and quality of New Zealand’s potato crop. It was a small victory, easily missed, but the arguments deployed to win it were destined to sweep all before them in the years to come. That’s why it pays to keep your ears peeled for arguments that sound a little off. What seems preposterous one year has a nasty habit of being enshrined in law the next.

By the time you read these words one of those seriously preposterous arguments will indeed have become law. With the combined support of the Labour, Green, and NZ First parties, the Corrections Amendment Bill sailed through its Third Reading in the House of Representatives on Tuesday afternoon.

I wish I could tell you that the National Party fought a lonely rear-guard action against its passage, but that would be a lie. Because the incident which prompted this law change involved the alleged perpetrator of the Christchurch Mosque Massacres, no politician seeking re-election would dream of turning it into a cause célèbre.

When a letter penned by the alleged Christchurch Shooter was mistakenly permitted to leave Paremoremo Maximum Security Prison, and make its way into the hands of the accused’s white supremacist supporters, and from there, inevitably, onto the Internet, an immediate cry went up for increased legal restrictions on prisoners’ right to communicate with the outside world.

No matter that the power already existed to censor or withhold prisoners’ mail; nor that the failure to exercise that power was Corrections NZ, it was decided by the Coalition Government that the law must be strengthened.

The truly sinister answer would appear to be that the administrative failure on the part of Corrections NZ offered a wonderful opportunity to place upon the statute books, for the first time, vastly expanded legal powers to restrict New Zealand citizens’ and residents’ freedom of expression. With the passage of the Corrections Amendment Bill, content which, in the judgement of the prison authorities, discriminates against any person on the basis of race, religious belief, sexual orientation, sex, marital status, disability, age, political opinion and employment status will constitute grounds for censoring and/or withholding a prisoner’s mail.

What’s wrong with that? The communications of extremists and terrorists, especially those responsible for events such as the Christchurch Mosque Massacres, have the power to inspire similar acts of extreme violence elsewhere in the world. Of course they must be withheld!

Indeed they must. Any prison charged with detaining a terrorist of such lethality must exercise extreme vigilance. All of their communications must be carefully studied by experts whose prime responsibility must be keeping the public safe. That’s what should have happened with the alleged Christchurch Shooter. The powers to censor and withhold his letters were there – they simply were not used.

There is, however, a very big difference between a prisoner like the Christchurch Shooter and your common-or-garden variety criminal with right-wing ideas. It’s a difference the new legislation declines to recognise. In addition to being punished for the crimes they have committed, right-wing inmates are to be further punished by having their internationally recognised right to communicate with the outside world made subject to the political judgements of their jailers. Offensive material published by persons living outside prison will continue to escape censorship. Prisoners’ opinions, on the other hand, may be legally suppressed.

How fortunate for the world that the First Amendment to the American Constitution made it impossible for Alabama’s prison authorities to avail themselves of legislation such as New Zealand’s Parliament has just passed. Had they possessed in 1963 the legal authority we have vouchsafed to our prison wardens in 2019, can it be doubted that Dr Martin Luther King’s celebrated “Letter From Birmingham City Jail” would never have seen the light of day? A few sentences from that letter bear repeating: 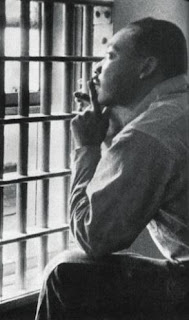 “Injustice anywhere is a threat to justice everywhere. We are caught in an inescapable network of mutuality, tied in a single garment of destiny. Whatever affects one directly, affects all indirectly.”

This essay was originally published in The Otago Daily Times and The Greymouth Star of Friday, 25 October 2019.
Posted by Chris Trotter at 12:12

"Why?"
Because it's a marvellous opportunity to pander to the right, particularly but not solely New Zealand First, and do a bit of virtue signalling that you are in favour of Laura Norder.
And for once I agree – it is egregious, particularly as they have the right to censor their mail anyway.

Interesting take John. I have long held the opinion that the majority of people demonized as alt Right are in reality nothing of the sort. What is demonstrated is the current intolerance of the liberal Left to any opposition to their monologue.

Chris has a real point here. The revolution has a way of eating it's children, the more powers allowed to government by one party will be used by another against them. Our current problem is that the ideological left dominate the discourse, and that actually suits the one percent whose direction seems to be "let them enslave themselves in their own snares".

"Our current problem is that the ideological left dominate the discourse,"

What! Given that neoliberal economics is accepted as gospel by all the media, including RNZ I'm calling bullshit on that. What you're actually seeing is that speech has consequences, and people are willing to call out bullshit much more readily these days. Probably because there's so much of it about.:)

What do you think of this Chris?
Seems to be no mention anywhere else in our MSM but it seems extreme to me.
https://www.rt.com/news/472065-us-deny-syria-oil-esper/

Chris , you've annoyed LPrent , ...... who now feels he has the irritating job of correcting your misapprehension whenever he encounters it on the net ..for the next decade even

I wonder if he contacted you for clarification?
If so , what was your answer?

Wow. Just read Lprints really long whinge about this blog on the standard. He really dosnt like free speech. May the woke never ever gain even a little bit of power.

There are so many facts they're infinite. People with out an agreed upon goal or in LPrints case an agenda suppress free speech can construct really well write arguments, economic modling, case law, legislation, with loads of facts and PowerPoint displays and be totally wrong at the same time. Lprint hasn't won the debate he merely presented a counter view that would suppress prisoner freedoms.

What I find interesting is that Māori during WW2 had less freedoms than they do today yet they where still willing and damn near keen to fight for everyone freedoms including the con-artists. Now we have people with in the left movement keen to cast away those sacrifices and forget about it.

"What I find interesting is that Māori during WW2 had less freedoms than they do today yet they where still willing and damn near keen to fight for everyone freedoms including the con-artists. "
A bit of background research would have pointed out that some were and some weren't. Having got that wrong, what do we make of the rest of your opinion? Not much.

Do you deny that maori fought in defence of all kiwis against the fascist scum during World War 2?

The gun laws were largely sufficient. Tarrant had access to an AR15 due to a loophole that gun owners warned police and the then government about at the time.

The correct move would have been to reclassify those AR15 variants that were currently category A as category E. Doing that would have required a bunch of people to either be reassessed against the stricter criteria that endorsement required or to dispose of their weapons to those that had been. In addition any similar traveller to NZ as Tarrent would have been subjected to greater scrutiny.

"
Do you deny that maori fought in defence of all kiwis against the fascist scum during World War 2?"
No, and I never said they didn't, that's a strawman. But five minutes research would have showed you that there was a fair amount of reluctance from those tribes who fought against the government in the land wars, and much more enthusiasm from those who fought with the government.
Actually, if you have access to the Internet which you obviously do, it would have taken you 30 seconds to find this out.

No I meant that post modern anti war revisionists want to sanatise the sacrifices made during world war 2 as it dosnt fit neatly in to there world view when I said people with in the left movement want to cast away those sacrifices.

What I mean by that is that Hitler liked the things that his supporters said and he didn't like the things his critiques say. He killed people that spook out against him basically. That drives my fundamental principle to allow anyone and everyone freespeech. All because Hitler didn't like freespeech.

I find it absolutely incredible that anyone who promotes suppression of freespeech would turn around and call freespeech advocates Nazi. It's an insult that you would encourage me to do more research. I know who I am, I know where I'm from and I know what's correct. So please don't insult my intelligence.