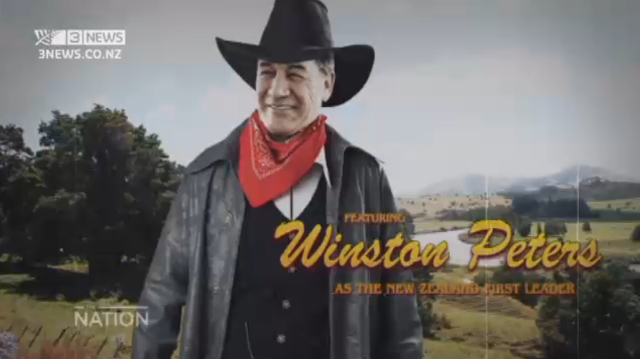 Help Is On Its Way: Win or lose tomorrow night, Marshall Peters has already saved his home town. (Screen-shot from Jeremy Jones' Animation Nation on TV3's The Nation)
WINSTON PETERS has already won the Northland By-Election. Success in tomorrow’s ballot will merely pin the prized tin star upon Marshall Peters' waistcoat. A sudden spike in the value of NZ First’s political stock is sure to follow. Proof that, when he has to, their old dog can produce an abundance of new tricks.
So much raw political energy has been poured into Northland by the National Party, and so much precious political capital expended there, that even if National’s candidate, Mark Osborne, somehow manages to pull off a surprise, come-from-behind victory, most pundits will dismiss it as Pyrrhic.
A governing party, polling in the high 40s, should not have to pull out all the campaigning stops to hold the ground it took more-or-less effortlessly at the preceding seven elections. When fleets of ministerial cars are forced to cruise the backroads of a safe National seat, disgorging dripping barrels of reeking political pork at every stop, just to beat back a man on the cusp of turning 70, then something’s gone very seriously wrong.
The most obvious “something” that went wrong was National’s choice of candidate. The animator, Jeremy Jones, commissioned by TV3’s The Nation, cast the hapless Mark Osborne as “Hoss” – the largest (and dimmest) member of the Cartwright family in the 1960s television series Bonanza. It was a shrewd choice. Hoss, like National in Northland, was big and strong – but he wasn’t exactly the brightest kerosene lantern hanging from the Ponderosa’s front porch. Pitting this foolishly grinning cowboy against a gimlet-eyed gunfighter like Winston Peters wasn’t just wrong – it was cruel. 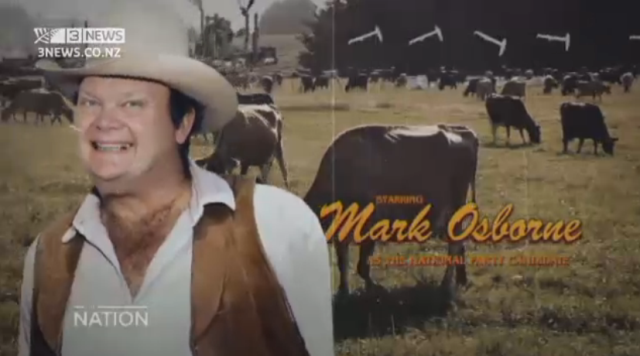 Foolishly Grinning Cowboy: Mark Osborne as Hoss Cartwright (Montage by Jeremy Jones)
Because, even if Mr Osborne wins, everyone will know it was in spite of, not because of, the qualities he brought to the fight. If Mr Peters goes down it won’t have much to do with Mr Osborne’s wobbly six-shooter. The man from NZ First is much more likely to be taken out by Steven Joyce’s Winchester rifle, sniping from the roof of the Saloon. Or, shot in the back by the little Derringer pistol that HdJ-Crosby|Textor’s Jo de Joux keeps in her purse.
And if Mr Osborne loses, well that’s it. He’ll go down in National Party history as the man who lost Northland. The last time anybody belonging to the National Party did that was in 1966, when L. F. Sloane, the MP for Hobson, allowed himself to be defeated by Vern Cracknell, leader of the Social Credit Political League. Amazingly, Mr Sloane was given a chance to redeem himself – which he duly did by reclaiming the seat for National in the General Election of 1969. Something tells me Mr Osborne will not be so lucky. Mr Sloane was a returned serviceman who’d fought in Italy. His were more forgiving times.
And the Labour Party? Will Labour be forgiven if, on the night, it turns out that just enough of its supporters have stayed loyal right through to deny Mr Peters the seat? Not by the supporters of NZ First one suspects. Not when they were expecting Labour’s Willow-Jean Prime to take on the role of Amy Kane in Fred Zinnemann’s classic western, High Noon. With Mr Peters playing the part of Marshall Will Kane, NZ First supporters have been counting on Willow-Jean to distract Mr Osborne at the crucial moment – preferably by laying Labour’s 2014 vote at their hero’s feet.
But even if Labour’s Northland voters do not forsake NZ First’s darling, and Mr Peters wins the seat, it’s hard to see Labour coming out of the by-election unscathed.
Politics thrives on drama, and drama must have heroes. Unfortunately for Labour, Andrew Little is no match for Mr Peters. At least, not with Mr Peters in Gary Cooper mode. The NZ First leader’s intuitive grasp of how to infuse a campaign with all the elements of high drama is unequalled in New Zealand politics.
The big silver bus kicking up dust clouds all over the North. That slogan: “Send them a message!” The inspired choice of the Little River Band’s “Help Is On Its Way” for the campaign’s theme-song. Mr Peters, as the director of his own production, had only to shout: “Lights! Camera! Action!” Instinctively aware that, in this sort of movie, gravitas and honesty beats expensive promises and cheap abuse.
Win or lose tomorrow night, Marshall Peters has already saved his home town.
This essay was originally published in The Waikato Times, The Taranaki Daily News, The Timaru Herald, The Otago Daily Times and The Greymouth Star of Friday, 27 March 2015.
Posted by Chris Trotter at 07:01

Several years ago I went to the courthouse in Napier - where I was born - to do a piece of hither to routine business, to get a copy of my birth certificate. To my astonishment, I was told this service was no longer available in Napier - indeed, on the entire East Coast of the North Island - and had been centralised. Use a free phone number, or the internet, or take a trip to Wellington were my choices.

I recalled this when I saw the lady on the telly berating John Key on the loss of the probation office in Dargaville. The provinces vote National, but the simmering anger at years of slow abandonment by successive governments is palpable. Napier/Hastings is hardly the boondocks - it is 120,000 tax paying citizens FFS - why can't I get my birth certificate there? Why is it impossible to provide a court registrar in Napier, and a probation office in Dargaville? As this bye-election is showing, if that simmering anger and resentment can be harnessed it can be an explosive political force.

The selection of "Hoss" Osbourne is all the more remarkable when one considers the other possibles, Grant MacCallum and Matt King. King, an articulate solid fellow, may have been passed over due to his being an ex-copper, a brand besmirched by the unlamented Sabin. Yet Osbourne is not unsullied due to his association with the former member. MacCallum seemed to be the obvious choice. The workings of the Tory mind are a mystery to me.

Judging by the sentiment I encounter in the North, the left are rather pleased with themselves, having the chance to "deliver a message" based on aversion to dishonesty, TPP, deep state and the wealth divide. They are philosophical about bridges and roads, long used to them. The infrastructure is more important to the right and, unimpressed by pork and porkies, some have taken the long view and also messaged National.

Mark Osborne looks great as Hoss, I however think he bears a not so passing resemblance to Benny Hill.

Selwyn Manning may have the key:
"The comment speaks of political vendettas that have been dealt. During the candidate selection process prior to the 2014 General Election, Grant McCallum was believed by National insiders to have blocked candidates in the greater Auckland region who were loyal to Judith Collins and her faction.

McCullum’s power-base is Northland. And Collins loyalists bided their time and blocked him from getting his way during the National Party Northland candidacy selections. The most Machiavellian of them suggest a loss in Northland will diminish Steven Joyce’s power, create instability for the leader John Key, and demonstrate that they cannot control the party outside of Wellington."
http://eveningreport.nz/2015/03/26/state-of-it-factional-fractures-in-evidence-as-national-loss-in-northland-looms/

At the risk of personal abuse, Osbourne looks like Mr Blobby
https://www.google.co.nz/search?q=mr+blobby&espv=2&biw=1529&bih=911&tbm=isch&tbo=u&source=univ&sa=X&ei=WXAUVZu-Hpfm8AWCiIKQCA&ved=0CBsQsAQ

Winston is an expert in turning grudges against the government into publicity, if not necessarily votes. But I still think he's going to be the next member for Northland.

I just don't understand why National stood such an unappealing candidate in such a hot-seat seat. I think they have become arrogant and complacent (more so than ususal) and this is a good wake-up call for the Nats. I hope that Peters does win the seat - Key is far too cock-sure and arrogant these days, a loss of power will do wonders for his lack of humility, not!! They should have run a female candidate maybe. Osborne just doesn't have universal appeal at all.

I'm delighted to have had the chance to vote for Winnie on this historic occasion. I'm sure that every person who voted for the great political survivor will go to sleep with a smile on their face tonight.
Congratulations Mr Peters...