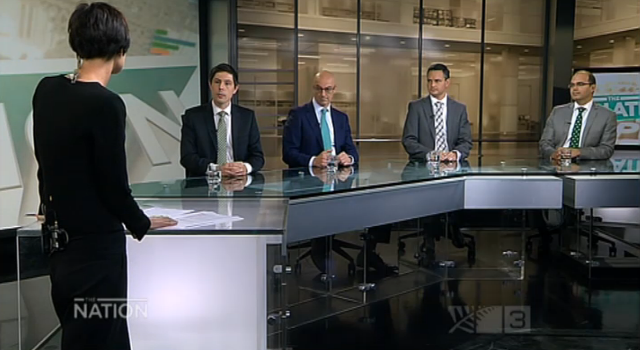 Little Feet: Candidates vying to succeed Dr Russel Norman as the Green Party's Male Co-Leader. From Left: Gareth Hughes MP, Kevin Hague MP, James Shaw MP and Vernon Tava. When tasked by The Nation's Lisa Owen with supplying the answer to a simple economic question, three out of the four candidates failed dismally. His successor will have to work very hard to reclaim even a little of Dr Norman's hard won economic credibility.
IT WAS IMPRESSIVE – but it wasn’t real. The Greens’ apparent mastery of economics turned out to be just one man’s – Dr Russel Norman’s – achievement. Hopefully, Dr Norman’s successor will attain an equal level of economic literacy.
Because most commentators agree that, throughout John Key’s second term as Prime Minister, the Greens’ co-leader, Dr Norman, easily outstripped his centre-left rivals as the best informed and most articulate economic spokesperson on the Opposition benches.
With rare political discipline, Dr Norman acquired a good working knowledge of economics and spoke its language as fluently as Finance Minister, Bill English. Perhaps more so.
Quite rightly, Dr Norman had identified the Greens’ unfamiliarity with mainstream economics as a serious weakness. Why should the voters take them seriously if they cannot talk convincingly about the exchange rate’s impact on manufacturing; the effectiveness of the Reserve Bank’s handling of monetary policy; or whether employers are responding adequately to rising levels of worker productivity?
It was all very well to talk about a future based on “Green Growth” and “Green Jobs”, but voters living in the here-and-now needed to feel confident that the Green Party understood what was happening in New Zealand’s economy – to their jobs.
To become a great artist, it is said, the art student must first learn all the rules and master all the techniques of painting. Only then will he be ready to break all the rules and develop new techniques of his own. Dr Norman clearly believed that the same applied to economics. Only after familiarising themselves with the “dismal science” of classical economics would the Greens be ready to preach the more joyful gospel of sustainability and self-sufficiency. 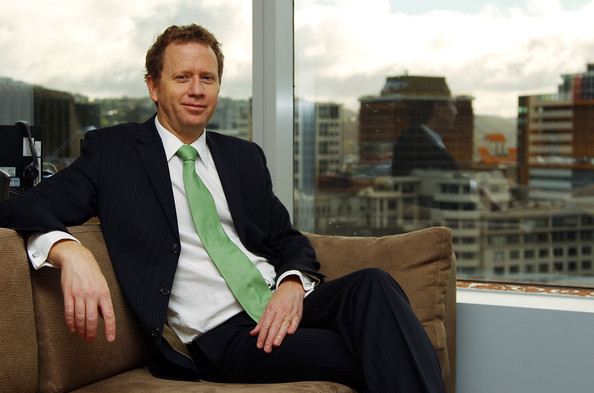 Dr Russel Norman: Big shoes to fill.
Dr Norman’s efforts in this all-important sphere of politics did not go unnoticed. Mr Key’s second term had hardly begun when the Parliamentary Press Gallery began referring to Dr Norman as “the real Leader of the Opposition”. This wasn’t solely due to the fact that the Labour caucus’s internal feuding was wreaking havoc upon the Party’s political credibility. It was also about the way Dr Norman, as the Greens’ economic spokesperson, was going head-to-head with the Finance Minister in the House – and not losing.
Did all this praise go to Dr Norman’s head? Is that why he raised the possibility that, in a future Labour-Green coalition government, the Finance portfolio might well end up in his own hands? (The very idea was enough to cause serious conniptions in Labour’s ranks!) Was Dr Norman’s much derided suggestion that New Zealand embark on a limited degree of quantitative easing all the evidence his critics needed to prove that a little knowledge is a dangerous thing?
Actually, neither of these accusations stack up. Subsequent events were to reinforce Labour’s serious lack of talent in matters economic. And the journalists, so quick to pour scorn upon Mr Norman’s QE proposals, revealed much more about their own, and their government briefers’, ignorance of economics than they did about the Green co-leader’s.
In spite of the fact that Labour’s policies on superannuation and capital gains had been in place for more than three years, neither the party’s leader, nor its finance spokesperson, proved equal to the task of selling them to the electorate. A Labour-Green coalition could have done a lot worse than making Dr Norman its Minister of Finance.
Not that any of this matters now: not after last week’s edition of The Nation on TV3. In the course of introducing the four candidates competing for the co-leader’s job Dr Norman is stepping away from (Gareth Hughes, Kevin Hague, James Shaw and Vernon Tava) the show’s co-host, Lisa Owen, asked each man to answer a quick-fire question on the economy. What’s the unemployment rate? The inflation rate? The Reserve Bank’s official cash-rate? The economic growth rate?
Only one of the candidates, Mr Shaw, even came close to supplying the correct answer. In less than five minutes, Dr Norman’s hard graft over more than three years: his gift of (as Ms Owen put it) “economic cred’”; was needlessly thrown away.
None of the questions were difficult. A few seconds on the Statistics New Zealand website was all that they required. That none of the candidates had devoted even this much time to acquiring the answers, makes Dr Norman’s economic literacy an even more singular achievement.
Some very hard yards await his successor.
This essay was originally published in The Waikato Times, The Taranaki Daily News, The Timaru Herald, The Otago Daily Times and The Greymouth Star of Friday, 20 March 2015.
Posted by Chris Trotter at 14:00

They were pretty dumb questions on Lisa Owen's part. Having the figures "at their fingertips" would not have proved that any of them had any understanding of economics. Figures like those could easily be looked up when needed.
I bet Miss Owen didn't know the answers either. She probably was able to look them up from a piece of paper in front of her.

from Stephanie: Thank you, anonymous 14:25

John Key likewise failed a simple test of his economic awareness, when he miscalculated the potential GST on an i-tunes track by a factor of 10. He said GST would only be about two cents when in fact it would be around 20 cents. The significance is not so much the simple calculation error - anyone can make a mistake - but the fact that he seemed oblivious that it couldn't possibly be so low. This showed he is out of touch with the effect GST has on the prices ordinary people have to pay. (I immediately thought, before hearing the correction from the media, "that can't be right".) And yet the media have simply ignored this incident. They haven't called it a "gaffe" or suggested that it calls Key's economic credentials into question. I'm quite sure if any other party leader had made such a gaffe, the media would have had a field day. But John Key got a free pass.

It is a good question; why did John Key get a free pass?

It is because he is generally regarded as economically astute. A single mistake does not displace that view. Of course if he made a whole lot of them it would.

In contrast the Greens do not generally have a stellar reputation when it comes to economic issues. So a series of mistakes (and sometimes just one) simply reinforces the view that they don't know economics.

I recall an incident in Parliament when I was newly arrived. Jim Bolger, as PM had treated two Ministers quite differently for some misdemeanor. I asked him why he did that. He said because "X" can get away with it, but "Y" cannot.

So the media are not showing political basis, they are making a human behavior judgement. This is also reflected in the tone of your item. You did not seem to expect John Key to make such an error

Im not convinced Norman was economically literate, he (like Chris Trotter) make the basic mistake of confusing quantitative easing (when a central bank buys bonds to push down interest rates) with monetised fiscal policy (when a government spends freshly printed bills (more likely to be digital dollars on modern times).

They are very different beasts and even a limited knowledge of monetary theory will convince the ignorant of the economic illiteracy of Norman and his ignorant fanboys.

It's not just that the Greens are ignorant of basic economics, it is much worse than that.
Firstly they do not even accept basic economics. They believe in some 'alternate' economic reality which of course does not exist.
Secondly this applies to all fields. They are ignorant or in denial of plain facts.
Take GE for example. There is not one shred of evidence it is harmful. There is a scientific consensus that it is safe and good (even more so than the scientific consensus on AGW). Indeed it is environmentally good.
Take transport. The Greens always oppose new roading & the private car on the basis it is causing climate change. So they have not heard of electric vehicles? A revolution in this field is about to occur yet they can't see it.
For decades they opposed nuclear power (how silent they are now) while coal was the obvious villain, not just for the planet but for human health & lives of 1000s of dead miners.
No the Greens should not be given the time of day and the left should take back their votes as they have been just poison for them.
What a waste.

Hell, I did economics some years ago and I can't remember what the hell they are. Anyway the Greens are a necessary evil. I don't care if they are mistaken, I want somebody asking questions. And to the extent that everyone is entitled to know exactly what they are putting in their body – I want stuff labelled. And the only way that's going to happen is if the Greens push for it, because nobody else is.