Loving Your Enemies: New Zealand's Catholic Bishops Come Out In Support Of The Iraq Deployment. 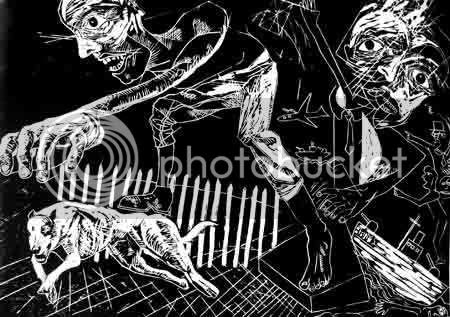 Cry Havoc! For the first time in many years a major New Zealand Christian denomination has come out in support of military action. But have the Catholic Bishops interpreted their Church's "Just War Doctrine" correctly? (Graphic: Warmonger by John Carroll.)


“WE CAN NO LONGER watch from the sidelines as the Islamic State continues to inflict immense suffering and brutality.” John Key? Mike Hosking? Fran O’Sullivan? John Roughan? No. These are the words of the Catholic Bishops of New Zealand. Alone among the other major Christian denominations, the Catholic Church has come out in support of the National-led Government’s troop deployment to Iraq.
“If by providing training to the Iraqi Army we can assist them to stop the aggressor in their land,” write the Bishops, “then as a matter of promoting the common good we should provide that assistance.”
Released on 24 February, in the form of a letter to their congregations, the Bishops’ message argues strongly that the people of Iraq “must not be left to face such unjust aggression on their own.”
Pope Francis, himself, write the Bishops, has said that it is “licit to stop an unjust aggressor”.
The Catholic Church’s senior cleric in New Zealand, Cardinal John Dew, softened the bishops’ position (if only slightly) by adding that: “Substantial humanitarian support should also be part of New Zealand’s involvement in Iraq.”
It has been a long time since any of New Zealand’s major Christian denominations spoke out publicly in favour of a military engagement. Indeed, the reconciliation of Jesus’s injunction to “Love your enemies, bless them that curse you, do good to them that hate you, and pray for them which despitefully use you, and persecute you”, with support for any kind of warfare requires some very fancy philosophical and theological footwork.
Before attempting such a challenging ethical tap-dance the Catholic Bishops would have checked out Paragraph 2,309 of the 1992 Catechism of the Catholic Church, which lists four strict conditions for “legitimate defence by military force:”
1.      The damage inflicted by the aggressor on the nation or community of nations must be lasting, grave and certain;


2.      All other means of putting an end to it must have been shown to be impractical or ineffective;


4.      The use of arms must not produce evils and disorders graver than the evil to be eliminated.
Few would argue that the First and Second Conditions have not been met in full. For the unfortunate souls who find themselves living in Islamic State, the likelihood of suffering “lasting, grave and certain” damage at the hands of its fanatical soldiers and clerics is all-too-real. Moreover, almost all of the numerous attempts to prevent or mitigate that damage, whether by negotiation or exhortation, have failed. If these were the only preconditions for the use of military force, then the Bishops would have their episcopal slippers on some pretty solid ground.
Where their position becomes decidedly unsteady, however, is when the Third and Fourth Conditions are applied to the Iraq Deployment.
Very few experts foresee the Western intervention against Islamic State having any serious prospects of success. Abu Bakr al-Baghdadi’s Caliphate could not have been born, nor could it have survived, had the armies of the Christian West not attacked and occupied Iraq, and the Shi’a regime, installed on the points of those armies' bayonets, not unleashed a murderous campaign of terror, murder and theft against the Sunni population.
The current Iraqi government, characterised by its American sponsors as more moderate and inclusive than its vicious predecessor, is in fact beholden to precisely the same constellation of religious, military and economic forces. For the Sunni Muslims of Iraq and Syria, the present evils of al-Baghdadi’s Caliphate are, sadly, preferable to the much worse evils that await them should the Shi’a militias prove victorious.
International relief and refugee agencies are already preparing for the flight of up to a million Sunni citizens from the city of Mosul should it be in imminent danger of falling to the Shi’a dominated (and soon to be Kiwi trained!) Iraqi army. Few Sunni Iraqis doubt the intensity of the Shi’a desire to be avenged upon the “butchers” of Islamic State. The mutilated bodies of Sunni citizens dumped on Baghdad’s rubbish heaps by Iranian-backed Shi’a militiamen have been every bit as effective, as brutal, flesh-and-blood propaganda, as any of Islamic State’s gruesome videos.
The better our Kiwi soldiers train these Shi’a extremists, the graver the evils and disorders they are bound to produce. In attempting to eliminate the evil of Islamic State, the New Zealand Defence Force could very easily become an accessory to the bloody sacking of Iraq’s second-largest city.
Are the Catholic Bishops really content to be associated with the slaughter and rape of innocent women and children? The torture and summary execution of thousands of Islamic State fighters? And the burning and looting of a great and ancient city?
St Thomas Aquinas wrote that: “Three things are necessary for the salvation of Man: to know what he ought to believe; to know what he ought to desire; and to know what he ought to do.”
With St Thomas’s words ringing in their ears, New Zealand’s Catholic Bishops should think again.
This essay was posted on The Daily Blog and Bowalley Road of Tuesday, 3 March 2015.
Posted by Chris Trotter at 10:04

Not surprising Chris knowing the past history of the Catholic Church, "Onward Christian Soldiers!"

The bishops have quite possibly been sucked in by the fact that IS are massacring Christians. There must be cognitive dissonance somewhere because I don't remember the Catholic bishops calling for intervention when Christians massacre Christians, or when Buddhists massacre Muslims. But New Zealand Catholic Bishops are sometimes a weird lot. They were by no means fully opposed to the sterilisation of "idiots" in the 1920s and 30s as I remember. Ambivalent to say the least, which is interesting considering the church's attitude towards sterilisation and contraception in general. Ah well, there's nowt so queer as folk as my mother used to say.