A Cautionary Tale From Canada. 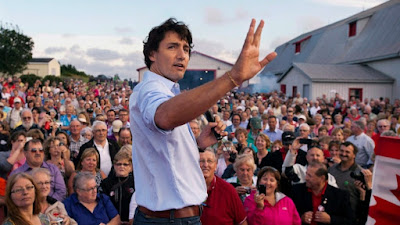 Chris – much though I agree with what you say, I think you are pissing into the wind. Pity.

We'll see what happens. Winnie may yet get too clever by half.

..but was widely dismissed as a pretty playboy who knew a lot more about snowboarding that he did about grown-up politics.

His policy stances towards oil pipelines war and Isreal are all indistinguisahble from Harper. This identity politics junkie is Canada's Tony Bliar.

My in-laws in Canada - mild mannered people - described Harper as prime candidate for arsehole of the century.

Your hope for the Greens will merely result in more votes lost from Labour I expect which would make Winston more likely to go with English. As at last getting rid of the race based electorates is actually National policy which Key sensibly put on hold, it's almost a done deal already. Still if the welfare system abuser can get a 100,000 beneficiaries out to vote Green who knows, perhaps Labour-Green can get 51%. Not impossible but really we need a real crisis for that to happen and the fact is, NZ is largely in a good space, unlike the countries where dramatic election results have surprised the chattering classes in the last year.

Justin Trudeau says he misspoke when he said we need to ‘phase out’ oilsands
http://globalnews.ca/news/3203164/justin-trudeau-says-he-misspoke-when-he-said-we-need-to-phase-out-oilsands/

Anyone can be a visionary progressive until reality bites.