Populism With A Smile: The Fourth In A Series Of Articles Examining The Four Main Political Parties. 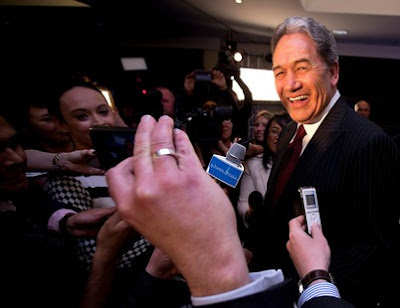 ´The Alliance firebrands were unwilling to live with the compromises of coalition government.´

The social creditors perhaps made the same mistake in 1954 in forming their own party which, over the years achieved nothing. They may have been better to have continued to work through the Labour Party, making their case at conference after conference.

And, while anger has always driven populism forward, today’s populists are super-charged with unreasoning hatred and rage.
.......
That isn't analysis it is slur.

Hi Chris
"The MMP electoral system, which transformed both the Alliance and NZ First into viable electoral propositions, was designed specifically to preserve the status quo – not overturn it"
It struck me at the time, though the MMP system was and is an improvement on the FPP , the sentiment that got the change over the line was the public perception that Rogernomics could not have been place under MMP. That it was a foil to the kind of unbridled power that FPP afforded that administration. Not to say Muldoons' increasingly dictatorial stance didn't contribute. But once MMP was in place of corse as you say, it has just made it that much harder to reverse it.
Cheers D J S

He could lead a campaign against neoliberalism and recruit Labour and the Greens to help him - to hell with MMP.

Yes, Peters, a trial, and trying, just to add to it. Anyone with an average IQ sighs and knits their brow at his name.

You make a good point for him, some unhigh-faluting reality of politics (the high-faluting, where we of the 'Grand Tradition of the Left' live).

Hager's 'Dirty Politics' assault pushed back US style 'believe what you need rather than what is' populism.

In summary, I find Peters tiresome. I put my first response ahead of every brown immigrant's.

I was studying New Zealand politics when Winston was Minister of Maori affairs. I thought his policies were pretty good myself. But there was always that vaguely racist attitude towards Winston in the National party, encapsulated in the "Not very good under a high ball." comment I think it was Holyoake might have made. If my memory serves me correctly I was driving to the exam when I heard on the radio that Winston was out. Frantically thinking of how to revise an answer to a question about Maori affairs policy then. :)

"That isn't analysis it is slur."
I think it's probably reasonable and fair comment. Donald Trump – yes. Nigel Farage – yes no matter how much he tried to hide it. Frauke Petry – yes but she disguises it by being utterly boring. Geert Wilders – yes if you actually pay attention to what he says. And of course Marine le Pen – tried to disguise it by throwing her dad out of the boat but still full of hatred and rage. They all try to put a gloss on it – except perhaps Trump who doesn't really have the brains to do it, but yeah I think so. :) The only guy I might make an exception for is Bernie Sanders, but then he's a populist of what passes for the left in the US.

GS
Your answer still begs the question: "is it hate and is it unreasoning?". You simply assert it is.

an insightful and timely appraisal of the political landscape....and thoroughly depressing

Jh
As does your statement that it it is a slur. I had sort of hoped not to have to go into long and boring examples of the various statements made by the people in question, such as Petry's idea that illegal migrants should be shot if they try crossing the border – and according to my wife, Wilders is subtly and sometimes not so subtly different when he speaks in Dutch rather than for foreign public consumption in English. And of course Le Pen has repeatedly tried to excuse the excesses of the Vichy regime. At least one of her advisers has been found guilty of inciting hatred. As far as unreasoning goes, I would suggest that probably isn't unreasoning, more cynical ploy to gain votes.