Neither Principled, Nor Pragmatic. What’s Eating The Greens? 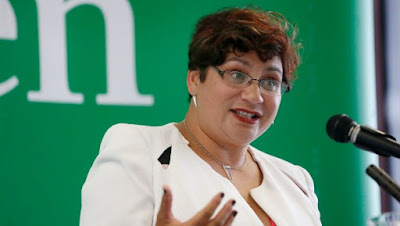 Hi Chris
The implication is that the Greens don't expect to form an agreement with NZF. So NZF is the opposition along with national.
That's my instinct too.
D J S

The Greens have always had a hard job explaining why growth is good.I doubt all the other fauna and flora would agree.
I think the Green members are bitten by the Corbyn bug:
[quoting Stephanie Rodgers speech to the Fabians]
The question I ponder when polls show people are anxious about immigration is, what’s behind it? Immigration in of itself is just the movement of people across borders. Are they worried about wages? Job losses? Housing pressure? Rents? Traffic? Crime? A loss of our national identity? All those things immigrants get blamed for.
What Corbyn did as well as play strongly to progressive values, is offer solutions to all those underlying anxieties which feed anti-migrant sentiment. You don’t need to fear newcomers if housing and transport and industry and pay and corporate greed are getting sorted. You don’t need to fear losing your identity if your identity is founded on community and collectivism.
https://bootstheory.wordpress.com/2017/07/08/politics-in-the-age-of-populism/

The problem is rather obvious I would think. In the usual hierarchy of the left, the Greens are second fiddle, seen like Act as a collection of enthusiasts of dubious ideological loyalty. However in the modern media world of 2017 the Greens are rock stars, tailored beauties and well read and tailored men, while Labour MPs are dry, grey unionists, community lawyers and social workers more fitted to a half percent revolutionary movement of last century. Led by a good looking political titan, a Clark, Cunliffe or Keating it might be a different story. At this time Paul Keating or David Curl offs would be daily dissembling, Bill English, the former MP for Clutha Southland daily in Parliament , in the TV news and on the hustling. Have a look on YouTube at Keating in his last great moment the impossible destruction of Hewson in the 1992 election. English who is 90/years out of date( about Forbes time) would be day for Cunliffe.

The politically correct versus the conservative not persuaded, the ideologically pure versus the gnarly pragmatists....would that we could put them in a pot and get a blend. Fatal to both parties methinks.

Have large donors to the Greens been told them to get their feet under the table as per Maori Party? with National.
There are now clear indications from Metiria Turei's attack on Winnie's Party that could be the situation.
Surely it is galling to them and their money backers to be in Parliament for about 20 years sitting on the hapless back bench's, watching and speaking for Green policies to see them ignored by the Government bench.
In my view the Greens now see Labour as lame duck for the September election and led internally by James Shaw, the blue set and donors are now saying the Maori are in the tent, achieving and sitting on better seats, our bums are sore on these seats.

How funny that a party like the Greens-keen to promote racial separatism, currently over water, calls the New Zealand First party racist!

I agree with you about Paul Keating, a articulate and powerful politician.
I have watched all the YouTube clips.

Sorry,
My last post was addressed to Robert M.

The Greens are simply just a distraction. If Labour does not get over 30% then its a fourth term National govt. Simple as that. Any voter that wants to see a change of govt this September Labour has to get within 7% of National minimum. Just saying.

Before next you decide to wax eloquent, try studying the English language, particularly the word 'dissemble.' Further, it's a good idea to read what you have written before you press the 'publish' button. You'd be surprised how many unnecessary words you can remove.

And as for Hewson, he was the dopiest leader the Libs had since MacMahon.

There is no left govt without Winston Peters. Labour and the Greens simply don't have the numbers, and will not on September 23.

So if you and Meteria see NZF as the opposition it is an opposition the Greens have to deal with to have any prospect of being in govt. And from my perspective NZF is in a much stronger position the the Greens to dictate the terms. The Greens have already said they are irrevocably tied to Labour, thereby instantly reducing their negotiating leverage.

Her ill starred intervention will further weaken the Greens negotiating position. NZF (Winston) may well require Labour to give the Greens only the most modest of positions and influence, and what can the Greens do about it? Basically nothing since they cannot do the alternative of supporting National.

You're a pragmatist after your previous post? Is Peters a player of the racism card or is he not?! Pragmatism or principle? When principle is both our heart and victory.

Adolf. Waste of time, been there done that. Doesn't work. The next one will be just as impenetrable. Sometimes I think he's Donald Trump.

Nick J
I have already thought of a name for those wise-guys and gals. Pragmatic Idealists. Spread the words. I think that should be a description that goes to the front of the crowd and speaks to them.

Well said Chris.
I think both NZF & the Gs are racist & divisive, but NZF is more honest about it. They are what you see whereas the Gs are a fake front.
The Gs want to import 5000 Muslims every year which is hugely divisive and aimed at undermining our society and culture, which they hate.
And they promote Maori preference for seats and other separatist apartheid type policies which is racist.
NZF just want a stop to Chinese, Indian & Arab immigration, which is racist. But it is a vote winner so the Gs, as you point out, are bizarrely trying to rule out being in government late September. Winnie can't stand them so it was a long shot before anyway.
Labour should dump the Gs now.

Wayne Mapp
I'm suggesting that Meteria does not expect Winston to finish up forming an agreement with Labour/Greens to form a government. That she expects Winston to support a national government in the final analysis if in the very likely event that he holds the balance. This is also my prediction. He has said in the past that there is a moral responsibility to give initial priority to cooperating with the party that gains most votes, and that's going to be National this time. He won't regard Labour/Green coalition till the day after the election as being one party. He will talk to the nats first, and then to Labour and the Greens, and in the end go with the option that affords him most influence in government, and support for most of NZF's objectives, and I think , and I suggest Meteria thinks , that will be National.
Cheers D J S

Any campaign by Labour led by Little to defeat English will have to be deceptive and disguised as they both stand in the same pointless discredited ideological position of maintaining an outdated male dominated society built on unsustainable and the artificial creation of low grade jobs and immigration.Yesterdays package avoided the creation of an Australian style paternity support scheme which if a women wants to have sex and children at 18 she will get full state support regardless of her employment or marriage status.Labour continues to base justice on education, work and male priority and remains little interested in public transport outside Auckland or closing down the dairy industry.Much could be said in favour of a Green NZF government.

Adolph. I was wrong.