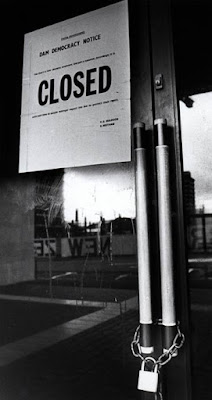 You can't have population growth without dams or nuclear power plants.

My mother's cousin was a dairy farmer for 60 odd years.

He said the dairy sector was a wet province industry ie it is best in provinces that have enough rain - Southland, South Otago, Westland, Manawatu, Taranaki, Waikato etc

Much as I detest the National Party's "peculiar fetish for state planning and control", I think history has proven the Muldoon Government's decision on the Clyde Dam to be sound both in terms of economic benefit and energy security (although history wasn't so kind to the rest of the Think Big projects). But I agree that recent decisions on dams and water rights for dairying expansion are ill-considered. The problem is that the incentives and compliance costs of the planning environment, particularly the Resource Management Act, favour cronyism and big projects - and the recent changes just make it worse. Environmentalists see the RMA as their friend but it is not - it is a permissive regime that socialises costs, rather than letting the costs fall where they should (i.e. on those who benefit).

Not a sound argument Chris unless you replace 'National' with 'the government' in your text.
You fail to mention that the Clark government backed irrigation in the SI a plenty, and set up Fonterra with special legislation to have a near monopoly.
Labour would also back more dams like the one you write about and DoC have done land swaps before and want to do more I'm sure. I know of one on a farm I grow forest on where the farm & DoC want to do a no-brainer sway of some excellent bush for some weed infested grazing land the farmer will do a way better job of looking after. But the S Court has said they do not have a legal way to do it so of course the law needs changing. That is not helping your mates at all. Labour would pass such a law and so would the Greens if they ever got power, which they will not, partly because people see them as just a ideological far left undemocratic bunch of arrogant busy bodies who lie with a straight face as they know they will never govern.
Once again you and GS are blinded by your bias into only seeing bad from one side.
Not that irrigation is bad of course. It is brilliant and has been the smart thing to do for 1000s of years. Hydro is great too and that is why NZ is 90% renewable & a sitter for wholesale change to electric cars. Just bought one.

Chris,
I would have thought a socialist like you would be in favour of giant, state controlled projects like Think Big. Would you have opposed them if they were proposed by Labour?
Or is it simply Rob/The Nats you object to?

On a tangential matter, The Greens are gret at congratulating themselfs about how much of our power is renewable - i.e hydroelectric - yet vehemently oppose any new dams!

The Marsden Point refinery was a successful item of the Think Big progects. Most of the other petro based projects were abandoned by the incoming Rogernomic Labour government because they were directed at securing New Zealand's transport energy security, and that didn't fit with the globalist neoliberal ideology of that administration. This was in the midst of the "oil shock" that occurred in the 70s when opec was formed and woke up to the fact that the world was dependant on their oil and would pay infinitely more for it than they had been getting hitherto. This caused a huge wave of world wide inflation and financial chaos which inexplicably has been attributed to a failure of the Keynesian economic policies that had been in place, and provided the opportunity to sell neoliberalism to the world.
We only have democracy once every three years, to chose who is going to make and change the rules. Once in power they cad do or undo as they please. They make the law.
D J S

As to electricity, we need to think about more distributed generation (solar panels etc on every new build) and regulation (yes the R word) which makes us build more efficient homes that use LESS so we don't need $billons invested in more large scale generating capacity and distribution systems (lines).

You have made two serious errors in this article Chris. The first one relates to the Court of Appeal. That Court did not make a decision about the Clyde Dam. The decision was made by the Planning Tribunal (for-runner of the Environment Court) and it was that decision that was overturned by the Clyde Dam Empowering Act. I was one of the Judges in the Planning Tribunal whose decision to refuse consent was so overturned.

In my defence, however, I would say that my version of events is the one carried on practically all the NZ history websites.

As for ECan - once again the public narrative differs considerably from your own.

I am not disputing your version, merely pointing out that it is not the version the public has been relying on since 2010.

Clearly, a case for better journalism all 'round!

My thanks for your timely intervention in this story.