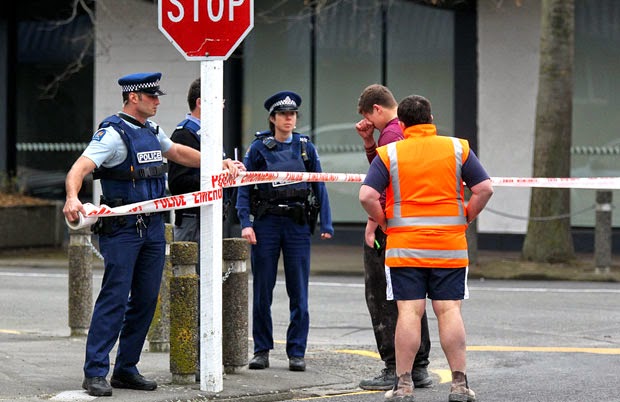 Crime Scene: The murder of two WINZ workers and the wounding of a third in Ashburton adds another tragic chapter to New Zealand's grim history of lone men committing multiple murders.


I NEVER WENT BACK to Aramoana after the killing. I had been a frequent visitor to the tiny seaside village back in the late 1970s and throughout the 1980s. Its tall cliffs and broad beaches providing a colourful backdrop to carefree summer days with friends and lovers. But after the carnage of November 1990 I just couldn’t face it. Something dark and savage had erupted from the shadows of Aramoana’s windswept pines; something that would always be there, waiting.
Ashburton offers an equally unlikely setting for yet another of New Zealand’s murder sprees. So quintessentially provincial a little town: with its tidy streets and well-kept parks; its sturdily conservative citizens. In Ashburton you can still catch a glimpse of New Zealand as it used to be. That place of bright and brittle friendships where, behind the post-war Kiwis’ welcoming smiles, lust and greed and violence seethed like a sack full of eels.
Always a little edgy, these places of multiple killings. Stan Graham’s West Coast: tightly corseted between the Alps and the Tasman Sea. David Gray’s Aramoana: lonely at the harbour’s mouth. Ashburton: beset on every side by the relentlessly level Canterbury Plains. New Zealand’s landscapes have a way of getting inside a man’s head. Sometimes the fit is just too tight.
We leave them alone, these men on their dark private journeys. There’s something about them that keeps us aloof – even when, as always happens at some point, usually towards the end of their tragic stories, they reach out to us for help. Like a drowning swimmer, flailing madly, we fear they will drag us down with them. Safer to keep our distance.
They make us angry, too, with their wayward rages, their unrealistic demands. The community’s patience is tested to breaking point: “That bloody man!”
And then comes the refusal. That last, infuriating and ultimately pointless gesture of defiance that inevitably sets in motion the relentless wheels of the law. Like when Stan Graham threatened his neighbour and the Police came for his guns. Those poor doomed coppers. Just doing their jobs. Gunned down like rabbits.
Fire purges and purifies the scenes of these tragedies, these crimes. Always. Something compels us to reach back into the deepest recesses of our social selves: to the very beginnings of our species; when the flames drove away the predatory beasts that lurked in the darkness and kept us safe ‘til morning.
Ashburton’s little WINZ Office will, of course, be closed. A new place will be found to conduct the business of our fraying welfare state. It will be a miniature fortress and there will be wariness and suspicion in the WINZ workers’ eyes. Fear will never be far away.
And one night the empty office will be torched. The Fire Brigade will stand alongside a gathering crowd and watch it burn. The flames will flare and the smoke will billow until, at length, the glowing embers fade and the ashes of Ashburton’s tragedy of 1 September 2014 are borne away on the wind.
This essay was originally posted on The Daily Blog of Monday, 1 September 2014.
Posted by Chris Trotter at 22:46

We should remember 2 things that must have contributed to this – perpetuated by right-wing governments – including Labour. Firstly the closing down of mental hospitals, which put many vulnerable people out on the street without a great deal of help.
And secondly, the pauperising of the working class, and the extremely hard arsed attitudes foisted on winz by the extreme right. It's the perfect storm.

Yep Surgeon, they are now reaping what they have sowed.

Sooner or later some-one is going to snap at their treatment and do something silly with disastrous results. This is a sad case of that!

Treatment similar to this.

Whilst I don't condone what the man is alleged to have done (hasn't been tried yet), I can understand his frustration.

You can't justify murder, you never can. If it takes you feel like you live in a world that makes sense then I pity you.
Stop trying to blame the government, stop staying that something was bad should of happened - you are justifying it. The only irrelevant part of the story is the winz office. What happened was just evil. Don't blame people with mental health either 1/3 people have a mental health condition and you don't see them committing mass murder.