Getting The Message: Chris Trotter's 'From The Left' Column, Election Eve, 2014. 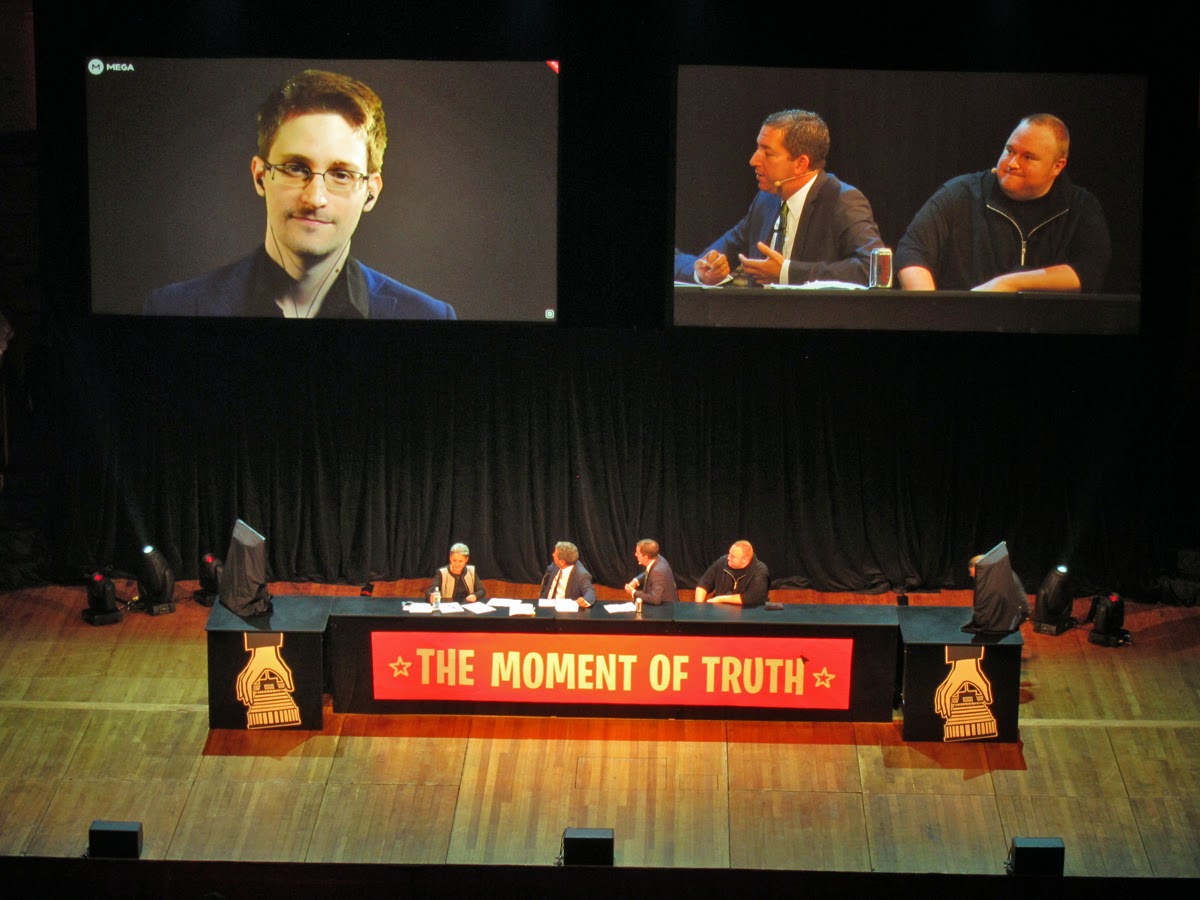 Moments For Truth: In 2014 some of the biggest turnouts have been for journalists – not politicians.The extraordinary public response to these messengers and their messages tells us a great deal about the electorate’s hunger for the kind of journalism that offers more than the usual “He said/She said” style of reporting the news; something more than political spin. Above all else, voters want to hear the truth. (Photo by John Miller)
THIS HAS BEEN AN ELECTION like no other I have experienced. Oh, sure, I have been in town halls that were packed before. And I have heard people arguing the toss over policy before. But, in the past, those town halls had been packed by people who had come to hear their political leaders. Those arguments had been over the content of the various party manifestos.
Not this time. In 2014 some of the biggest turnouts have been for journalists – not politicians.

Nicky Hager, the author of Dirty Politics has filled halls from Auckland to Dunedin. I was present at the meeting he held in the Mt Eden War Memorial Hall. The big auditorium was filled to capacity, with people standing around the walls and in the foyer. That was impressive enough, but when the former Court of Appeal Judge, Sir Edward Thomas, led Mr Hager onto the stage, the whole audience rose as one to give him a standing ovation. I’ve been told that his Dunedin audience responded in exactly the same way.
I attended another big public meeting on Monday. Billed as “The Moment of Truth” by that merry political prankster, Kim Dotcom, it was supposed to prove once and for all that the Prime Minister, John Key, knew all about the big German’s situation long before being briefed about the combined NZ Police/FBI raid on the Dotcom mansion in January 2012.
When I arrived shortly before six o’clock on Monday evening, the queue of people waiting to get into the Auckland Town Hall was already over a block long. In my considerable experience of political meetings this was without precedent. Officially, the Auckland Town Hall auditorium can seat 1,673 persons and last Monday it was chock-a-block (with a further 800 people said to have been turned away). As I watched the venue fill up, I couldn’t help thinking how pleased John Key and David Cunliffe would be to see the public turning out in such numbers to hear them on a chilly Spring evening.
In all honesty, however, those two-and-a-half-thousand Aucklanders had not turned out to hear Kim Dotcom, alone. Most of them were there to hear the Pulitzer Prize-winning journalist, Glenn Greenwald, and the fugitive whistle-blower, Edward Snowden, talk to them about what our Prime Minister knew about the GCSB’s plans to undertake the mass surveillance of New Zealanders – and when did he know it.
The extraordinary public response to these messengers and their messages tells us a great deal about the electorate’s hunger for the kind of journalism that offers more than the usual “He said/She said” style of reporting the news; something more than political spin.
Above all else, voters want to hear the truth.
Or, at least, they say they do.
There are times when my fellow New Zealanders remind me of the man who lived in a town by a flood-prone river. One day the Weather Office issued a serious flood warning and advised the town’s residents to evacuate their homes immediately. But the man said, “I’m a godly person. God loves me. God will save me.” The rain poured down and the river flooded. From a passing rowboat a civil defence volunteer hailed the man. “The town’s flooding! Let me take you to safety!” “No thanks,” the man shouted back, “God loves me. God will save me!” The river rose higher. A helicopter appeared. The rescue-team’s loudhailer crackled: “Mate, you’re in danger! Let us winch you to safety!” But the man shouted back that God loved him and that God would rescue him. About an hour later, the man drowned. Arriving at the Pearly Gates, the man’s bedraggled ghost complained bitterly to St Peter: “I loved God. I prayed to Him for help. How could he let me drown?” St Peter sighed. “God sent you a weather report, a rowboat, and a helicopter. What the hell are you doing here?”
Well, in the run-up to Election Day, the voters of New Zealand have been given the opportunity to read the investigative journalism of Nicky Hager and Glenn Greenwald, and to hear the direct personal testimony of Edward Snowden.
The truth about the sort of society we’re becoming has been very clearly explained.
So, what the hell are we waiting for? How much more rescuing do the voters of New Zealand need!
This essay was originally published in The Waikato Times, The Taranaki Daily News, The Timaru Herald, The Otago Daily Times and The Greymouth Star of Friday, 19 September 2014.
Posted by Chris Trotter at 10:20

“God sent you a weather report, a rowboat, and a helicopter. What the hell are you doing here?”

Keys knick name Slippery aint for nothing ,obviously, no amount of evidence seems to stick but I think an educated review of his life is sufficient to see who we are dealing with and just how much hidden power he wields that will probably never be known fully in the reconstructing of a right wing autocracy in NZ which sadly is not a country in that I knew people in who had freedom in their souls and respect for the good law for all which use to work but now its a mean money grubbing self serving criminal attitude that runs this country not one of sharing