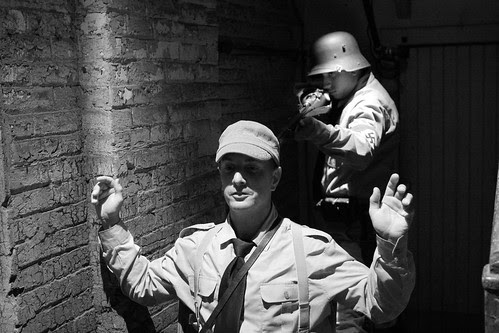 Up against the wall Motherf**ker! There comes a moment in the history of every revolutionary nationalist movement when street level activism ceases to be an asset and becomes a liability. The most infamous example of revolutionary liabilities being liquidated is the "Night of the Long Knives" of July 1934, when Hitler eliminated the leadership of the brown-shirted SA (stormtroopers). The latter had foolishly taken the socialist half of "National Socialism" seriously. If Tariana Turia and Pita Sharples decide the Maori Party has reached a similar moment of decision, then Hone Harawira’s career as a Maori Party MP will be over.
THE PRIME MINISTER called it an "apology of sorts". He would leave it to New Zealanders to decide on its merits.
And therein lies the problem. New Zealanders – that is to say all those New Zealand citizens whose names appear on the General Electoral Roll – will NOT get to decide the merits, or otherwise, of Te Tai Tokerau MP, Hone Harawira’s, "apology".
The only New Zealanders Harawira has to convince are the New Zealanders whose names appear on the Maori Roll for the parliamentary seat of Te Tai Tokerau. Theirs are the only opinions that matter in this situation, and all the evidence so far presented concerning the electors of Te Tai Tokerau suggests that they regard Harawira as a man who understands their situation, and speaks their language.
The Prime Minister can’t even hope that electors registered in other seats won by the Maori Party will feel moved to pass judgement on this "edgy firebrand" from the North. To do that they’d have to vote the Maori Party out of Parliament. But Maori electors are unlikely to punish Tariana Turia and Pita Sharples for the sins of their foul-mouthed colleague? They weren’t the ones who referred to Pakeha New Zealanders as "White Motherf**kers".

IF EVER the National Party had occasion to reflect upon the wisdom of retaining the Maori Seats – this is it.
Since 1867 the Maori Seats have provided not only a safety valve for Maori frustrations, and a forum in which to present Maori grievances, but also a means of including Maori politicians in the broader political leadership of the whole country. On balance, therefore, New Zealand’s 142-year-old experiment in special Maori representation should be (and for the most part has been) acclaimed rather than condemned.
No longer.
The people currently occupying the ever-expanding number of Maori seats (in 1989 there were four, today there are seven) are very different from early 20th Century Maori leaders like James Carroll and Apirana Ngata. Nor are they the representatives of Maoridom’s "lost ones" – the people Wiremu Ratana shepherded into the broader Labour movement during the 1930s.
No, the Maori Party MPs who currently occupy five of the seven Maori seats are unreconstructed Maori nationalists: proponents of tino rangatiratanga – which they construe to mean the full restoration of Maori sovereignty over Aotearoa/New Zealand.
Their credo is that of the Maori intellectual who literally wrote the book on Maori sovereignty, Donna Awatere. Back in the 1980s (before she transformed herself into an Act MP) Awatere wrote: "This country is Aotearoa. It is ours. White people of any generation have no business being in this country." In an interview with the Auckland journalist, Brian Rudman, she rejected out of hand the liberal Pakeha ideology of biculturalism: "[W]e can never have biculturalism", she declared, "because the Pakeha, with their in-built hatred towards other cultures, will never allow it."
The argument which has broken out between Harawira and rest of the Maori Party caucus is over tactical, not strategic, questions. It’s the style of his political rhetoric which has upset Turia and Sharples – not the substance. In their common desire to bring about a constitutional, political, economic and cultural revolution in this country, all five Maori Party MPs are as one.
So, what are these tactical disagreements? Primarily, it’s a question of where to insert the levers of change. Under the large tribal corporations, with all their resources and their growing links with the wealthiest and most influential Pakeha? Or under the materially impoverished, politically marginalised and increasingly restive Maori masses?
Harawira has aligned himself unequivocally with the latter. He still calls himself an "activist" and maintains close links with the revolutionary wing of the tino rangatiratanga movement. As the field commander of the tens of thousands of Maori who joined the hikoi of protest against the Foreshore & Seabed Act in 2004, Harawira’s radical credentials are unimpeachable. Without that mobilisation the Maori Party would have lacked the mass base of support required to achieve parliamentary representation.
He has a strong case.
Turia’s and Sharples’ argument is more subtle. Mobilising the Maori masses is all very well, they say, if all you want to do is frighten Pakeha. If, however, you want them to repeal legislation, devolve resources, and institute a broad-ranging review of New Zealand’s constitutional architecture – then a relationship of trust and mutual respect is required. This is not a time for scary hikoi, it’s a time for persuading the economic and political leaders of Pakeha New Zealand to manufacture, supply and pay for the rope that will ultimately hang them.

IT’S A DILEMMA common to all revolutionary nationalist leaders. How to demobilise the mass support which propelled your movement into office? Once you’ve been admitted to the inner-sanctums of economic and political power – how to persuade your "activists" to abandon their revolutionary dreams?
It was the problem Adolf Hitler faced in 1934 – eighteen months after he had been appointed Chancellor, and his revolutionary nationalist Nazi Party had joined the Reich government. Out on the streets, the Sturmabteilung (SA or "Stormtroopers") commanded by Ernst Rohm were demanding full implementation of the revolutionary economic and social reforms Hitler had promised during the national-socialists’ rise to power. Numbering close to 3 million, the SA, and Rohm, openly threatened the dominant position of the Army in German society, and Hitler’s conservative backers were becoming increasingly apprehensive.
Hitler’s response was the infamous "Night of the Long Knives", during which he effectively decapitated the SA. Over the course of seventy-two hours, beginning on the evening of 30 June 1934, Rohm, along with scores of other "enemies of the Reich", was arrested and executed on the Fuhrer’s orders.
What Tariana Turia and Pita Sharples must decide is whether the Maori Party is now so deeply embedded in the Pakeha power-structure that it no longer needs its street-level activists – or their leader.
Are the financial resources of the big tribal corporations sufficient to maintain the Maori Party as a viable electoral force, or should Harawira’s unmatched skill at mobilising the Maori masses (and frightening Pakeha) be retained – for the time being?
If the decision is made that Harawira and his radical supporters – like Rohm and the SA – have become a political liability, then it won’t be Phil Goff who finds himself being lined up against a wall and shot.
This essay was originally published in The Independent of Thursday, 19 November 2009.
Posted by Chris Trotter at 14:53

"
The only New Zealanders Harawira has to convince are the New Zealanders whose names appear on the Maori Roll for the parliamentary seat of Te Tai Tokerau."
"

Hawawira is history , against the wall, Chris.

Paul Scott, you are wrong.
Chris Trotter, you are correct.
My second brother worked for Carter Holt Forestry south of Kaikohe in the mid to late eighties. In 1988 he predicted that within fifty years there would be civil war in the North. When discussing the Hone Harawira case he reminded me that there were only 29 years to go.
This is the same brother who now supervises a predominantly Maori work force in the Bay of Plenty. One day, when he was exasperated with yet another request for tangi leave, he shouted;
"You bloody Maoris are only concerned about the dead. No bastard has ever asked me for time off work to coach their boy at footy, or to attend a school prizegiving. The dead are gone. Your children are the future."
Requests for tangi leave plummeted.

Whence Hone: we will likely know by weeks end.

@Tauhei. Nothing like a bit of work place bullying eh? If Tangi leave is in the workers agreement or even has been negotiated by custom and practice then they are quite entitled to take such leave. Mr Notts if I am not mistaken was a bit of a chum with the scabs at Open Country Cheese Waharoa.