A World Of Our Own 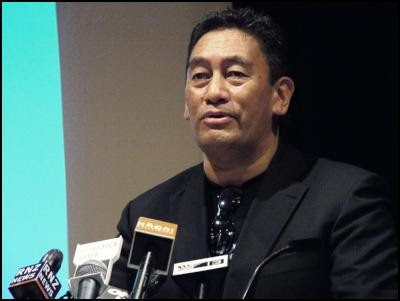 "Did you call these Pakeha mofos 'mofos', mofo?": Pakeha New Zealanders outrage at Hone Harawira's use of the Black American expletive speaks volumes about their fundamental isolation from the all-too-contemporary manifestations of New Zealand's colonial legacy.
IF THE REACTION to Don Brash’s infamous "Orewa Speech" proved that "biculturalism" had failed to "take" among a large number of Pakeha, Hone Harawira’s brutal e-mail to Buddy Mikaere offers proof that the bicultural ideal is similarly resented by many Maori.
This should worry John Key.
If New Zealand’s official ideology pleases neither Maori nor Pakeha; if the smouldering resentments fanned into flame nearly six years ago at Orewa still glow; then how much confidence can the Prime Minister (or any Pakeha politician) have that Treaty settlements negotiated between the Crown and Maori will "take"?
In 2004 the "political class" closed ranks over race relations. No less than Don Brash, Helen Clark validated the fears and suspicions of the Pakeha nation. Only a fool could read the Foreshore & Seabed Act as anything other than a ruthless and unequivocal assertion of Pakeha power.
The Maori reaction: the massive hikoi of protest that filled Parliament grounds in May 2004; Tariana Turia’s defection from Helen Clark’s government; the formation of the Maori Party; followed with Newtonian precision.
But, nothing was resolved.
National’s narrow loss to Labour in 2005 merely put off the day of reckoning.
For the next three years Pakeha New Zealand, at odds with itself, was consumed by other issues. The vexed question of race-relations was pushed onto the back-burner. When they entered the polling booths in 2008 most voters had more pressing priorities.
But not the Maori Party. For Tariana Turia, Pita Sharples et al, the priorities remained unchanged. Their mission was to roll back the bipartisan obliteration of Maori aspirations symbolised by the Foreshore & Seabed Act, and to make their party the indispensable partner of whichever of the two main Pakeha parties secured a plurality of the popular vote. They were determined that, henceforth, the electors on the Maori Roll, through the Maori Party, would exercise the casting vote of New Zealand politics.
The events of the days following the 2008 election were, therefore, interpreted very differently by Maori and Pakeha.
For Maori, National’s offer of partnership was seen as proof of the pivotal role the Maori Party is destined to play in New Zealand’s political and constitutional affairs. The Prime Minister had to keep the Far-Right at arm’s length or risk re-energising Labour. He needed them more than they needed him.
For Pakeha, however, John Key’s outreach to the Maori Party was seen not as a forced concession, but as a generous gesture of reconciliation and inclusion. The very fact that the Prime Minister, with Act’s support already in his pocket, didn’t need the votes of the Maori Party, merely confirmed the generosity of inviting Ms Turia and Dr Sharples to join his government.
To a dyed-in-the-wool Maori nationalist like Hone Harawira, the Maori Party’s decision to accept the Prime Minister’s invitation must have looked like very high-risk politics. With the overwhelming majority of the Maori Party’s voters being semi-skilled or unskilled workers, there was a real danger of it being perceived as cuddling-up to their White and Brown bosses.
The Maori Party’s equivocation over Nick Smith’s Emissions Trading Scheme, coupled with its support for National’s cutbacks to ACC, strengthened this perception considerably.
Mr Harawira’s intemperate response to Mr Mikaere bears eloquent testimony to the Te Tai Tokerau MP’s frustration with the situation in which he and his party now find themselves.
The decision to work with National (or, one suspects, any Pakeha-led party) requires the Maori Party to demonstrate an ongoing ability to both propose and accept reasonable compromises.
But, to someone holding Mr Harawira’s nationalist beliefs, it was the Maori people’s willingness, over the past 150 years, to make "reasonable compromises" with the Pakeha authorities that led to the alienation of 63 million acres of Maori land. And, it clearly enrages him that "puritanical" Pakeha politicians and journalists were unwilling to characterise the trading-off of an inconsequential meeting in Brussels for a day in Paris – "The City of Light" – as his own "reasonable compromise".
New Zealand’s official "bicultural" ideology enjoins its citizens to walk in two worlds with understanding and respect. But reality tells a very different story. Maori New Zealanders have no choice when it comes to walking in two worlds. Pakeha New Zealanders do - and most of us choose to stay in our own.
It’s enough to make a saint swear.
This essay was originally published in The Dominion Post, The Timaru Herald, The Taranaki Daily News, The Otago Daily Times and The Greymouth Evening Star of Friday, 13 November 2009.
Posted by Chris Trotter at 14:19

Jeepers dude,
you print
"
Official "bicultural" ideology enjoins its citizens to walk in two worlds with understanding and respect. But reality tells a very different story. Maori New Zealanders have no choice when it comes to walking in two worlds. Pakeha New Zealanders do - and most of us choose to stay in our own.
"

You have got to forget about speaking for Pakeha mate,
we are not Pakeha at all,
we are New Zealanders, and
as for Hone,
Hone is dead mate, your pontifications are meaningless,
your headline is correct
you surely are an old New Zealander mate,
Hone is sacked because he is racist, arrogant, and antagonistic person.

you are right Peter, most Pakeha choose not to engage in Maoridom apart from the haka, manu dolls and the rest of that easily assimilated cultural identity, when it suits. as for being New Zealanders, maybe you should look at the origin of that word, it was in fact a label for the Maoris at the start of the arrival o the settlers, and subsequently a name for Maori in the land wars. Only when the numbers and time had despatched Maori did settler colonist claim the name. In all honesty a true New Zealander knows, understands and engages with both cultures, those that choose a monocultural existence are not true New Zealanders. I'll leave up to you to call them what you want. All Hone did was highlight the existing, and real racism in New Zealand, maybe people should take a closer look, it might take the sting out of the truth.