Something Rotten in the State? 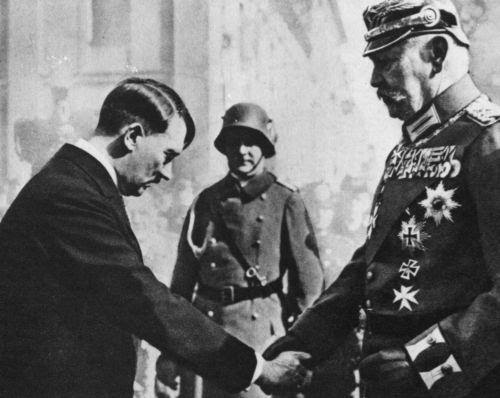 Dirty Dealing: Hitler's appointment as Reich Chancellor on 30 January 1933 was the culmination of weeks of backroom dealing designed to protect the reputation and property of the Head of State, President Paul von Hindenburg. When the wealth and prestige of the State are reduced to mere pieces on the political chessboard, citizens should be on their guard.
THE RECKLESS haste with which this Government is rushing to legitimise its own bastardised Emissions Trading Scheme is deeply perplexing. Why the rush? What is so important that it can’t be put off until July 2010?
No one seems to believe that the Climate Change Conference in Copenhagen is going to deliver anything remotely resembling a binding agreement. The Aussies look less and less capable to passing their own ETS. And Act has just pledged its support for procedural legislation delaying the start date of Labour’s scheme from 1 January to 1 July 2010.
So, I ask again: "Why the rush?"
It’s difficult to avoid the conclusion that we’re all missing something here.
Why is National so willing to court a massive backlash from its own conservative supporters? With the talkback phone-lines running hot with callers denouncing the terms of the proposed "deal" with the Maori Party and their corporate mates, you’d think the Government would be wanting to slow things down – not speed them up. But Nick Smith is driving this thing like a man possessed – and John Key is letting him.
It just doesn’t add up.
For reasons none of the official organs of State (the Treasury, State Services, the Parliamentary Select Committee on Climate Change) seem to know anything about, this law simply has to be passed in the next few days.
Historically speaking, such wheeling and dealing only occurs when the clock is ticking on something someone somewhere desperately wants to happen – or prevent happening.
The classic example is the appointment of Adolf Hitler as German Chancellor in January 1933. Germans at the time couldn’t understand it. The Nazis were losing public support. They were nearly bankrupt. And the incumbent, Chancellor Kurt von Schleicher, was about to release a comprehensive economic plan for beating the Depression.
Also pending, however, was the report of an official inquiry into dodgy land deals in East Prussia – deals in which the Reich President, Paul Von Hindenburg, was donkey-deep. This was the ticking clock that allowed former Chancellor, Franz von Papen, to persuade Hindenburg to dismiss Schleicher and appoint Hitler. With Hitler as Chancellor, the report on the East Prussian land deals could be spiked. Papen and his right-wing aristocratic cronies were convinced they could control Hitler. They were wrong.
Is there something akin to this at work in our own State? Some deal that cannot afford to be delayed – or exposed? Some arrangement based on the proposed ETS that will fall apart if the legislation fails to go ahead by 7 December?
Nothing else adequately explains the political irrationality of the Government’s current behaviour.
Clearly, someone is willing to make the same sort of high-stakes gamble as Papen; someone is convinced that in the long-run the situation can be retrieved; someone’s ready to endure short-term outrage because they’re convinced that the political and/or personal long-term advantages that will follow are worth it.
But there’s something foul and rotten at the heart of the State when such ruthless and reckless grasping for narrow partisan – or, worse still, personal – advantage takes priority over policy-making for the common good.
When the wealth and prestige of the State are reduced to mere pieces on the political chessboard, it is time for all citizens to be on their guard.
The country is in danger.
Posted by Chris Trotter at 15:22

I agree La Patrie is endanger. But aren't you overdoing the Hitlerian analogies a bit at present. They lose their effectiveness if used too promiscuously.

There's a prevalent notion on the Internet that any reference to Hitler of Nazism represents some sort of argumentative failure. This is a dangerous notion. Hitlerism was one of the most important ideological influences on the 20th Century. What's more, it's a phenomenon that still resonates in the conduct of contemporary politics. If we're talking about extreme nationalism, and the way it trumps class-based analyses, then the experience of Germany in the 1930s and 40s is especially relevant. Call "Godwin" if you like, but the impact of Nazi ideology on the history of our times is undeniable - and constitutes an important political lesson.

Of course, the history of the Third Reich teaches us unescapable lessons that we ignore at our peril. That's precisely why it's important not to overuse the parallel. We all know the story about the boy who cried "Wolf!"

I don't have any argument with any of your individual recent uses of Nazi analogies. It's just that there's been rather a lot of them.

And I do applaud your continuing insistence on the lamentable ability of tribal war drums to silence reason and humanity.