Putting The Beach Beyond Our Reach 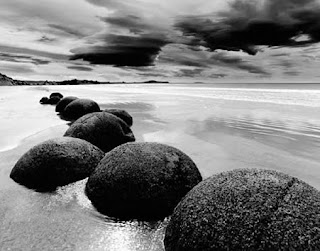 Putting the beach beyond our reach: Both Maori and Pakeha have a mutual interest in taking the foreshore and seabed off the market - permanently.
THE IDEA of vesting the ownership of the foreshore and seabed in the tupuna (ancestors) of the coastal-dwelling Maori hapu (clans) is nothing if not imaginative. Property developers and mining companies are very resourceful, but (as far as I know) they’ve yet to master time travel.
In addition to permanently taking the foreshore and seabed off the market, "Tupuna Title" would also encourage the conservation of New Zealand’s coastal environment. As kaitiaki (guardians) of resources passed down to them by their ancestors, local hapu would have powerful cultural and legal incentives to protect and pass-on the rights of customary usage to their children and grandchildren.
But, how would Pakeha New Zealanders relate to this revolutionary legal concept? The short answer is: with considerable difficulty.
For a start, we’d have to be willing to embrace a radical expansion of the number of things which cannot be bought and sold. The most important of these prohibitions relate to the human person. Since the abolition of slavery in the early part of the 19th Century, it has been illegal to sell or buy human-beings – or any part thereof. Our persons are also legally protected against intentional injury, and the State is prohibited from inflicting cruel or unusual punishment upon our bodies.
The creation of "Tupuna Title" would extend the idea of legal inviolability to the coastal territories and customary rights of New Zealand’s first inhabitants. In a very real sense, these would become an extension of their bodies: things that could never be legally bought, sold, injured or abused.
Once Pakeha New Zealanders got their heads around this extension of legal inviolability, a new compact with the Maori clan-guardians of the foreshore and seabed could be negotiated. In return for reposing the title to this resource in their ancestor’s hands, and placing it beyond the reach of legal confiscation, hapu would grant to Pakeha the inalienable right to access and enjoy New Zealand’s beaches.
But, are we Pakeha ready to embrace a concept as radical as "Tupuna Title"? Or, would we rather the whole of New Zealand’s foreshore and seabed remain vested in the Crown – which we, through our dominant position in Parliament, control? What are the chances of Pakeha giving that up?
No better, I would say, than the chances of the iwi-based Maori corporations having any truck with the notion that their interests should be subordinated to those of the individual hapu and whanau – whose claims to exercise customary usage remain the strongest.
It was the Ngati Apa iwi, and its repeatedly refused applications to establish a commercial aquaculture enterprise in the Marlborough Sounds, that precipitated the legal and political debate which gave birth to the Maori Party.
That debate was both framed and articulated by the growing class of Maori middle-class professionals. They have become the party’s principal advisers, just as the top layer of Maori businessmen have become its principal supporters. Unsurprisingly, it is for the Maori middle-class and the large iwi corporates that the Maori Party now speaks.
What the Maori Party is seeking, on their behalf, is a legal formula for turning the customary rights of hapu into profitable opportunities for iwi entrepreneurs.
The Green Party co-leader, Metiria Turei, sees it like this:
"The most likely outcome is repeal [of the Foreshore & Seabed Act] but legislation which results in exactly the same situation: a confiscation; a denial of access to the courts; the benefits going to some, perhaps, of the wealthier Maori organisations, but not to the hapu and the whanau on the ground who came to our select committee and pleaded with us to protect their customary title."
It’s hard to fault Ms Turei’s reasoning. To date, all of the Government’s statements on the issue have been framed in terms of negotiations between iwi and the Crown. The simplest solution – returning to the legal status quo ante and allowing the Courts to determine customary title on a case-by-case basis – is regarded by everyone (except Act) as too risky politically.
With only the Green Party willing to champion hapu rights, it’s pretty clear that the question of who "owns" the foreshore and seabed will be settled by some sort of "deal" between iwi and the Crown (i.e. the Maori Party, National and Labour).
I seriously doubt whether the concept of "Tupuna Title" will make the cut.
This essay was originally published in The Timaru Herald, The Taranaki Daily News, The Otago Daily Times and The Greymouth Evening Star of Friday, 6 November 2009.
Posted by Chris Trotter at 14:07

My guess is a return to the status quo whereby Maori have their rights to go to the courts to determine legibility for fee simple title. However I expect there to be a precondition - an irrevocable caveat on any title granting unfettered public access to beaches. This may well upset a few of the current private owners of coastal property it it were introduced retrospectively, as it should if introduced at all.

Chris says :
"
the idea of vesting the ownership of the foreshore and seabed in the tupuna (ancestors) of the coastal-dwelling Maori hapu (clans) is nothing if not imaginative.

Are you up to it,
are you prepared for it,
I am.