The Devil's Own Job 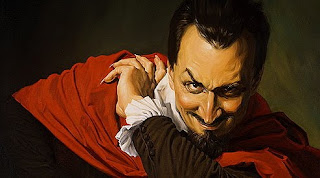 I'd say his luck is about to run out, how bellegerent he has become, even arrogant. If you write to National MP's they don't write back, and they only take comments on their sites that are in alignment with their views. Never will I vote for Key again, shyster. Voting for change was a fallacy.

Do you think that New Zealand First will make a comeback?

In recent decades, they've been the primary beneficiaries of right wing populist protest.

Were they discredited for all time by last year's plethora of Winston-gates? Is there life for them without Winston? Might we expect something worse to emerge in the vacuum on the populist right?

And please feel free to make reference to the Weimar Republic if you so wish. They could be quite relevant here

Heh, I enjoyed it, Good entry, story line holds on and finished with a change and moral to match.
Fiction suits you.

And we get the news that the goverment is about to make large cuts in expenditure in the 2010 budget.

Enjoy your summer Chris, I suggest you read up on ways to avoid getting Carpal Tunnel syndrome. Youre going to need it.

Chris, five months ago almost to the day, you took high umbrage to my suggestion that you were becoming "one of those conservative baby boomers which are thwe subject of his latest column".

Given the tone of this piece, and the two which follow which all celebrate the Labour party's appeal to social conservatism, not only as valid political strategy but as healthy and beneficial to NZ society, how exactly was my characterisation unjustified?

In the intervening months I have waited for your to clarify your position; and rather than explicating how you are really actuially a progressive, all you've done is confirm the initial diagnosis; and gleefully so. May I now retract my retraction?

Ah, Lew, I wondered where you had got to.

Sure, go ahead, knock yourself out - I don't mind in the least.

More and more these days I find myself sympathising with the German playwright, Hans Johst, who wrote:

"Whenever I hear the word 'culture' ... I release the safety-catch on my Browning."

Chris, while it may have seemed so, I wasn't asking your permission -- I was asking whether you actually have any defence to make. It seems you don't. Does this mean your high dudgeon back in June was simply theatrical, or has your conservatism copngealed into something more soloid since then, that you are now more prepared to own up to it?

What it means, Lew, is that I feel under absolutely no obligation to respond to your questions.

My "high dudgeon", as you put it, was only aroused by what I saw as your argumentum ad hominem. With the benefit of hindsight, however, I can see that personal abuse is actually about the only currency we could possibly trade in.

Our world-views are so radically at odds that any attempt to seriously debate the issues that divide us are bound to end in vituperation.

But simply because we are, sometimes, cast in the role of our enemy's enemies, doesn't make us comrades.

The best thing, therefore, is for us to follow Bob Dylan's sage advice, and simply agree that: "you'll go your way, an' I'll go mine."

Chris, having the advantage of your public profile I became aware of these differences many years ago; and yet I thought there was some hope.

The trouble is that you claim the mantle of progressivism, not solely that of democratic socialism and its exclusive obsession with the economic. You don't need me to tell you that progressivism is not democratic socialism; it maintains a wider agenda than simple class conflict, incorporating those New Social Movements which you deride and the identity matters behind them -- feminism, indigenism, and so on. And yet you continue to lump them in together.

Not to traverse the relative merits of either -- you're right that this is aimless -- but your claim to a bob each way is bad for both. It allows the enemies of either movement to conflate them and apply the failings of either to the other. The impetus behind my earlier posts on the topic was, in the words of a rather less erudite bard of the 1960s to say: "Hey, you, get off my cloud!"

If you're going to be a democratic socialist, by all means do so. Proclaim it loudly, that everyone may know that there's a social conservatism which comes along with it. But don't presume to claim a monopoly on leftism by claiming that you're also a progressive, or any sort of liberal. Not only is it false advertisement, it's a disservice to your own cause and to others of us who, while not your comrades, are -- as you agree -- not your enemies.

Alas, I am as jealous of the reputation of progressivism and liberalism as you are.

Perhaps it simply boils down to the very unoriginal observation that every social movement is ultimately defined by the struggles which engulf it.

History only moves forward because men (and women) push it.

If you're ready Sisyphus, one more time.

Sorry to butt into this private argument but , Lew, I'm much more your natural enemy than poor old Chris, as I'm a Social Democrat (not a Socialist) who is philosophically a Burkeian conservative.

Both you and he worry about being progressive. I don't. I know that progress is a delusion. What counts are humanity and compassion. These in turn require a degree of social cohesion, economic prosperity and public liberty. The rest is window dressing.

And now, Chris, can I ask you to answer my question about right wing populism?

Victor, it's not a private argument at all; in fact it's been a rather public one.

You will notice that I also talk of humanity, compassion, economic prosperity and public liberty.

I don't think Chris would demur from these priorities.

But without social cohesion , we would have a Hobbesian war of all against all, in which none of these other public goods could be acheived.

In its turn, social cohesion depends upon traditions of civility .

In New Zealand's case, these traditions are mainly derived from Britain, although neither the Maori component nor New Zealand's own national experience can be discounted.