Islands In The Mainstream 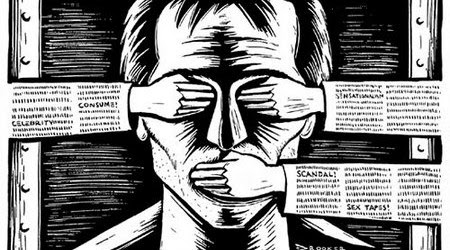 Keeping The Story Straight: But if a conflict arose between the mainstream media's version of events and the version presented by the citizen journalists of the blogosphere - what then? Even more alarming - what if the bloggers' version proved to be the more believable?

Chris, do you really think this is all good anonymous bloggers versus evil MSM?

Do you know for a fact all the bloggers are always telling all the whole truth and nothing but the truth and the MSM are the only ones manipulating and distorting and being fed lines to publish?

"The tone of these attacks leaves little doubt that not only do these political journalists consider bloggers to be unwelcome and illegitimate contributors to the nation’s political discourse, but that nothing would make them happier than to see them tightly regulated and controlled"

That's a huge claim. Which journalists are you referring to? All of them? Or specific ones.

The lack of specificity is deliberate, Pete.

A quick search through the back files of the MSM will identify the men and women of whom I speak.

And, no, of course all MSM journalists aren't bad - just as all bloggers aren't good.

What I am attempting to show is the growing power of citizen journalism to expose the cosy relationship that has grown up between the newsmakers and the news media - and how the news media will fight to protect that relationship.

What was once the right arm of Democracy has become the principal defender of the powerful.

This is not a communications studies exercise, Pete. It affects us all.

I can't for the life of me see why you are surprised about the bias in the MSM - in all sorts of areas from 'climate change'to Maori 'rights' they have been slanting events by omission and in countless other ways for a very long time. Good debate on all sorts of issues is essential but simply not happening.

I think it's a good thing if so-called "citizen journalism" holds traditional media to account and puts pressure on them to adapt and improve.

And as you acknowledge that there are bad bloggers, how can they be identified if they are anonymous? You must be aware how easy it is to change pseudonyms and continuing being bad.

At least the strength and weaknesses and track records of traditional media are known.

Anonymous loggers could be anyone with any sort of motive. How do you know that traditional journalists aren't secretly blogging under pseudonyms in a great conspiracy to discredit?

A lot of good can be done by 'citizen journalists' and bloggers. But there's a lot of unknowns, making it very difficult to evaluate their honesty and worth in the great mixed media melee.

Well done Chris, you have summed up the situation perfectly.

I was at the conference, the reporting angle that the media become obsessed with was unfortunate and sad. The Herald, TVNZ, TV3,etc were not interested in supplying their readers with the actual facts of the conference, which in all honesty would have made good reading for anyone iterested in politics.

Surely the blogosphere is the forum (literally). the market place, the corner soap box, the town hall meeting, the marae where free and frank discussion happens.

Since the disappearance of real people at real meetings (how real politicians are is, of course, a separate question.)

Assorted media types have donned the mantle of guru.

Goddammit someone is questioning their credibility! How dare they!

Anonymous bloggers are to be shot.
Their messages are not worth considering.

Anonymous bloggers do not have to sell advertising space/time/self promotion. Media types and gurus do.

Methinks some people protest too much.

I have always thought that what is said is more important than who said it.

Import matters, personality is irrelevant except to the egoistical.

This is arguably the best blog post I have seen in ages. The gallery suffer group think,the public are sick to death of Banks, Dotcom,whatever the Greens scream du joir and that is why kiwiblog, whaleoil,standard are so popular.
The MSM decide a line to take and they run with it despite any person with half a brain wonde why they have just lost a half hour of their life watching the news.

I read your post three times Chris. I routinely surf blogposts in search of commentary on daily events & I subscribe to The Press!
NZ's MSM is now, more than any time I can remember since the early 80's, focused on manufacturing you know what.

The quality of reporting in the MSM has been weakening for a long time. Emotionally charged adjectives that are not backed up by facts are the standard fare of National Radio news headlines. Radio and TV reporters seem to think it's more important to connect with the audience than to think and probe. Mainstream web news like stuff.co.nz is very lightweight. When I want some analysis and behind the scenes insight into NZ politics I can find no better place than bowalleyroad.

A post that will ripple out there for some time to come. The “background radiation” has been observed. Watch your backs all right citizen journalists and maintain our efforts.

A few years back I had dinner with a then-cabinet minister who was coming to the end of his third term in the House. He was a quick thinker, a fast talker, and good on his feet – and, as a representative of his constituency, he had done a pretty good job. But he was also the first to admit that, after eight-and-a-half years with the initials MP after his name, he was way out of touch with what it was like to be ‘an ordinary Kiwi bloke’.

Also dining with us that evening was a senior and influential journo. Two or three times a week – week in and week out – she told the nation what it needed to know. But, that night, after several glasses of wine, she openly acknowledged that her most important audience was a small bunch of politicians (from both sides) and a small handful of publicly-paid policy advisers. ‘The electorate only gets to have a say once every three years,’ she said. ‘My colleagues and I get to have a say every day.’

Chris,
You may be interested to know that the there is some philosophical support for your views in this post. See David Coady WHAT TO BELIEVE NOW (a text in applied epistemology) especially ch. 6.
Charles

It was so good to read this post Chris. It was obvious to intelligent observers that the Labour Party Conference was being reported with an agenda which had nothing to do with what actually happened.