An Accumulation Of Scandals 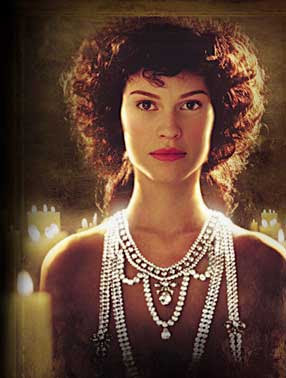 A Queen's Ransom: Star of The Affair of the Necklace, Hillary Swank, wears a replica of the ruinously expensive necklace which, in 1785, engulfed the French Queen, Marie Antoinette, in scandal. The Affair proved to be the tipping point for the French people's tolerance of monarchy. If the scandal over Solid Energy's ruin isn't enough to tip the New Zealand people into open rebellion against the excesses of its elites - what will?
THE AFFAIR of the Necklace was a sensation. Four years before the outbreak of the French Revolution, this extraordinary story of royal profligacy, political intrigue and criminal fraud at first mesmerised, then outraged, the French people.
The centuries-old bond between the French Crown and its subjects (already frayed by years of famine and excessive taxation) was broken. Ears that had been closed to the arguments of those advocating radical change were suddenly open. The magic of monarchy had been exposed as a charlatan’s trick – nothing more than political sleight-of-hand.
Today, the Affair of the Necklace would probably be described as a “tipping point”: that moment when an accumulation of events, each of themselves too insignificant to call into question the viability of a social or political system, suddenly acquires the necessary weight to bring it crashing down.
Last week’s revelations concerning Dr Don Elder, the former boss of Solid Energy, set me to wondering whether New Zealand might be close to experiencing its own Affair of the Necklace – and what such a scandal might mean for John Key’s government.
Could the revelations relating to Dr Elder’s sudden departure from Solid Energy be compared to the Affair of the Necklace?  They have certainly provided New Zealanders with a rare glimpse of the world in which New Zealand’s wealthiest and most powerful men and women go about their business.
And the parallels with pre-revolutionary France are startling.
Solid Energy’s corporate headquarters (dubbed “The Palace” by its detractors) neatly fills the role of Louis XVI’s sprawling Palace of Versailles. Behind its glittering façade, Dr Elder surrounded himself with an astonishing four hundred employee “aristocrats” on salaries in excess of $100,000. Dr Elder himself, over a decade of service to Solid Energy, was paid the kingly sum of $10 million.
And yet, in spite of these extraordinary rewards (not to mention the millions paid out as executive bonuses) we are told that Solid Energy, with debts approaching $400 million, is teetering on the brink of insolvency. Unsurprisingly, both Dr Elder’s and the Solid Energy Board of Directors’ stewardship of what was once a highly profitable state-owned enterprise has come in for swingeing criticism.
Hence the public’s shocked disbelief at the news that Dr Elder, though no longer in charge of Solid Energy, is still receiving a salary of $27,000 per week. Last Thursday, the company’s interim Chairman, Mark Ford, informed Parliament’s equally disbelieving Commerce Select Committee that the former CEO’s unique knowledge and understanding of Solid Energy, considered vital to the company achieving a smooth leadership transition, required Dr Elder to be kept on the payroll.

A Kingly Salary: In spite of the fact that he no longer runs Solid Energy, Don Elder continues to be paid $675.00 per hour, or $27,000 per week.
Given the fact that Dr Elder was continuing to be paid $675 per hour by the taxpayer-owned SOE, the Opposition members of the Commerce Select Committee argued they had as much right to hear Dr Elder’s insights into what went wrong at Solid Energy as Mr Ford and his board. With very few opportunities available for the public scrutiny of the SOEs’ performance, the Opposition insisted that their select committee appearances be models of transparency.
Alas, Dr Elder – like Miss Otis in the song – could only present his “regrets”. And Mr Ford was not disposed to mandate his employee’s appearance before the Committee. Accordingly, the people’s representatives – in marked contrast to the interim Chairman and his corporate colleagues – were not entrusted with the reasons for Solid Energy’s sudden reversal of fortune.
The demise of Solid Energy and Dr Elder’s fall from grace is a salutary tale, but it is not, I would hazard, the tipping point which the Affair of the Necklace became.
It was, after all, the innocent (but deeply unpopular) Queen Marie Antoinette who ended up wearing the blame for the loss of her father-in-law’s ruinously expensive piece of bling. That was important, because in Marie Antoinette the scandal acquired a target more-or-less guaranteed to generate the kind of visceral reactions that shift public consciousness.
These are the scandals that threaten governments.
The Solid Energy debacle remains, however, a significant contribution to the accumulation of scandals already weighing down the National-led Government’s scales.
That it has not provoked a response as damaging to our Prime Minister as the Affair of the Necklace proved to King Louis XVI and his queen, is probably because Dr Elder remains a largely abstract symbol of the vast gulf that now yawns between the elites who run New Zealand and mass of the people who must bear the cost of their delinquency.
The New Zealand public was alarmed and affronted by the Solid Energy story, but it was not enraged. Mr Key and his government should give thanks for a lucky escape.
They should also move quickly to reduce their vulnerability to the depredations of elites who seem to have forgotten how quickly the status quo can become the ancien regime.
This essay was originally published in The Press of Tuesday, 12 March 2013.
Posted by Chris Trotter at 12:16

I'm not sure this will gain much traction, as the problem is entrenched beyond Solid Energy. Chris Hayes recently published a good book about it called "Twilight of the Elites". Rough summary: our meritocratic society is now structure so that people like Dr Elder, who know how to game the system and pushed all the right buttons during their career, run everything and have insulated themselves from all bad consequences. Meritocracy is no better than Aristocracy, as you seem to be saying in this piece.

Sure, ordinary folks would be quite happy to take Elder to the cleaners, but absolutely everyone in the position to do so are all clones of him, and won't go after one of their own.

It is, just what this country needs.
A rebellion, a revolution, a rising up of the folk who have had enough of the lies, the deceit, the selective amnesia, the greed, the arrogance and the disrespect shown them by this government, but, it will take more before they reach breaking point and Key is having such fun playing with the public, toying with them as a cat does a mouse.
But I do hope it happens in my lifetime and sooner rather than later.
Count me in and sign me up...

Problem with a revioolution is that the outcome is no certainty that the faction one thinks should win, will actually take control.

Sure have a revolution, but be mindful that the combatants will align not just on political ideology divides but also racial, demographic, geographic, etc. lines.

Not to mention right wing influences from Australia and USA to install a "right" wing government.

While a revolution is called for be mindful to have in place a viable and, more importantly, a popular alternative.

Agreed Tortoise. But it wont happen here, Kiwi's are too complacent. Hence the lack of re-action to Lange/Douglas' re-defining the economy at the expense of working people.

People only scam the system because we let them do so. The whole psychology behind the last "Labour" and the present Gnats is to dumb down the population and make us compliant little boys and girls.

Will we revolt? I doubt it, we will just whinge and moan but we won't get out there and change things. The best thing I ever did was to get out of NZ (went to Europe) and from there I could see just how pathetic Kiwi's really are.

Chris, have to say, great piece! sometimes your just too evocative to ignor. Kat.

Why thank you, Kat.

I'm glad you were evoked.

I couldn't agree more. And on top of the "sale" of our mighty river and its power. I have written a piece on water as a optical entity on my blog, starflat@simplesite.com

I grew up in an arid land, as I live in one now ...but thereby hangs another tale.
Love Guantanamera too.

And for our own wee "let them eat cake" moment we need look no further than Poaka Benfittte's grotesque orgasmic glee and ebullience interspersed with lightning soupcons of "concerned Mother Theresa" glances as she gushed like a manic hyena on speed over the 200 poor souls who applied for seven jobs in Auckland last week. Grease the tumbrels, mes amis.