Too Little, Too Late: The Opportunity To Stop the CPTPP Has Passed. 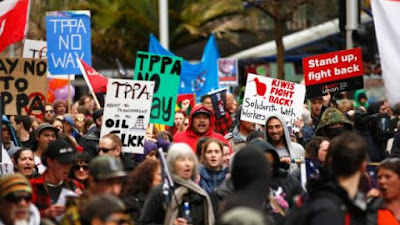 Off The Hook: Since early-November 2017, the Labour-NZF-Green Government has been able to sell its message that the CPTPP represents a genuine improvement on the TPPA. So much so, that the street-based protest option has quietly dropped-off the anti-TPP agenda. That’s why the anti-TPP pressure group "It's Our Future" is promoting a “Day of Action” on 4 March 2018, rather than an honest-to-goodness protest march like the one that stunned New Zealand on 4 February 2016.

“TOO LITTLE, TOO LATE.” That’s what I would say to David Parker on the day he released the text of the Comprehensive and Progressive Trans-Pacific Partnership (CPTPP). With the signing ceremony due to take place in the Chilean capital, Santiago, on 8 March – a mere fortnight from the document’s release – the time available for thorough public scrutiny and debate is simply too short.

I would also say “Too little, too late” to Oliver Hailes, the new spokesperson for the anti-TPP pressure-group, It’s Our Future (IOF). He has announced a “Day of Action” against the CPTPP on Sunday, 4 March. But, at just four days out from the signing ceremony, what is IOF’s “action” supposed to achieve?

It’s hard to tell. In the bulletin released by Hailes, the Day of Action is described as:

“[A] Nationwide Day of Action across New Zealand in opposition to the Government’s plans. The Government intends to sign the treaty in Chile on Thursday 8 March and there will be an organised presence at Parliament on that day - watch this space, details are to come!”

Reading on, it becomes clear that IOF’s strategy in relation to the CPTPP is fundamentally unchanged from the strategy it adopted against its predecessor, the plain old Trans-Pacific Partnership Agreement (TPPA).

In Hailes’ own words:

“Signing is not the end of the process! [The CPTPP] must be presented to Parliament for debate, and then it will be referred to the Foreign Affairs, Defence and Trade Select Committee for examination. These are opportunities for all of you to have your say through written or oral submissions. Eventually the Select Committee will make a recommendation to the Government as to whether or not it should ratify the text and adopt implementing legislation to bring New Zealand law into line with its international commitments. And then, if the Government gets its way, New Zealand will undertake binding action. Each one of these steps provides an opportunity for you to intervene and let the Government know why it should turn back. Remember, the whole plan fell to pieces last time.”

Well, yes, it did, but only because President Donald Trump yanked the United States out of the Agreement at the last minute. Submissions to the Foreign Affairs, Defence and Trade Select Committee made absolutely to difference to the National Government’s plans to bring the TPPA into effect. It is fanciful to suggest that submitting to the same select committee on the CPTPP will produce anything other than exactly the same outcome.

Albert Einstein defined insanity as “doing the same thing over and over and expecting a different result”? The IOF should turn that quotation into a poster and pin it up on the wall above Oliver Hailes’ desk.

So, what would work? The answer, sadly, is that, right now, a fortnight out from the signing ceremony, it’s hard to see anything working.

Jacinda Ardern, Winston Peters and David Parker were vulnerable to the critics and opponents of what was then being called TPP-11 for only a very brief moment: the period immediately preceding, and immediately after, the Apec Meeting in Danang, Vietnam on 6-11 November 2017.

That was the period during which it became clear to all those who had trusted in Labour’s, NZ First’s and the Greens’ declared opposition to the TPPA, that the new coalition government was preparing to renege on its promises. If the IOF movement had called its 20,000-plus supporters onto the streets in early-November 2017, under the slogan “Hold Them To Their Word!”, then there might have been a chance of spooking Jacinda, Winston and David into resisting the pressure from MFAT, MBIE, MPI, Federated Farmers and Business NZ to treat their pre-election promise to defend New Zealand’s sovereignty as “just one of those things you say in Opposition and then forget about it Government”.

Sadly, the IOF did not activate its data-base of followers and lead them into the streets, with the result that, in the weeks and months that followed, the Government has been able to sell its message that the CPTPP represents a genuine improvement on the TPPA. So much so, that the street-based protest option has quietly dropped-off the anti-TPP agenda. That’s why Oliver Hailes is promoting a “Day of Action”, rather than an honest-to-goodness protest march like the one that stunned New Zealand on 4 February 2016.

Getting a handful of worthy souls to gather in city-centres and parks on 4 March 2018 and hold up a tired display of re-cycled placards and banners, is something IOF can manage. Putting 50,000 angry Kiwis on Queen Street is no longer within its power.

The impact will be negligible. A Government riding-high on 48 percent in the latest Colmar Brunton opinion poll has nothing to fear from a single day of [in]action.

This essay was originally posted on The Daily Blog of Thursday, 22 February 2018.
Posted by Chris Trotter at 10:27

Words of resignation and reality Chris.

When All the effort and focus of opposition to a far reaching government action has gone into electing representatives that have been leading that opposition narrative, only to have those leaders volte face immediately they get into a position to reverse it leaves the voter without a course of action.
The trouble is out representatives do not seek office to represent us at all. They represent their own fascination with the idea of being in government, and do what the moneyed people want them to do when they get there, which makes their lives easier.
D J S

God help us all, if this is a Labour we are truly fucked.
"When a nation's young men are conservative, its funeral bell is
already rung."
- Henry Ward Beecher

Labour are a bunch of absolute hypocrites.

As the Labour party was formed with the core principle of "the socialisation of the means of production, distribution, and exchange", the commitment of the CPTPP couldn’t be starker. The agreement, will now prevent through treaty any law or regulation that restricts foreign corporations with "(10.2)(a) the production, distribution, marketing, sale or delivery of a service".

Any New Zealand based company should seriously consider the benefits of leaving these shores.

A company which prefers to now register its headquarters in Singapore (which can be done online but requires employing a Singaporean secretary and having one director based on the Island - with Visa available no less) will be accorded the same preferences and market access that it has from being a New Zealand firm. Your new Singaporean company will pay less than 9% for the first S$300,000 you made in annual profits, followed by a flat rate of 17% flat thereafter and everything done in New Zealand from that moment on will be classed as international trade.

Indian firms with Singapore headquarters will be entitled to bid for whole-of-government service provision - as has been occurring in Australia. Temporary Entry Visas will be made available for foreign workers under their classification of "business persons" which is defined as someone "who is engaged in trade in goods, the supply of services or the conduct of investment activities". The minimum wage in Vietnam is $1,300 USD a year which is itself a major incentive to not employ kiwis who have high living standards and wages compared to foreign counterparts. Vietnam too may be considered generous considering Brunei has no minimum wage and corporations may secure a visa for employees for $15 USD.

A shrewd corporation might suggest supplying medical services with Nurses from the Philippines, relocated to Brunei and flown in and out of New Zealand on Temporary work visas as their salary expectations are only $5,000 New Zealand Dollars a year. Perhaps supplying education services with teachers from the Philippines but based in Brunei could be appealing - they too can be supplied for $6,000 a year. The prospects for business and the growth of trade are quite stunning but all at the expense of the living standards of New Zealanders.

Through the agreement, "(10.6) No (nation) shall require a service supplier of another (nation) to establish or maintain a representative office or any form of enterprise, or to be resident, in its territory as a condition for the cross-border supply of a service."

The Investor Disputes process is still in place and any foreign corporation feeling aggrieved by the New Zealand governments actions will be entitled to choose the forum in which it would prefer its dispute to be heard. That forum panel will be chaired by a foreign national (by requirement) and will arbitrate over the alleged treaty infringement and rule with a prescription to "eliminate the non-conformity or the nullification or impairment".

This current crop of politicians deserves to be spat on for this level of betrayal. This is as bad as anything that came flowing from Douglas years.